The Baikal Dutch: Who Are They?

A people called “Golendry” (translated presumably as “Hollanders”, “the Dutch”) has been living in the remote Siberian taiga for more than a century. The people speaks a mix of Belarusian and Ukrainian, prays in Polish and has German surnames. They live in Zalarinsky district of Irkutsk Oblast and are a true cultural phenomenon. “Key to Baikal” will tell you what kind of people they are and how they got here.

Several dozen families of “Golendry” moved to Siberia from the Bug River at the beginning of the 20th century, during the Stolypin’s agrarian reform. Then the place of the people’s residence was a part of the Russian Empire, and now the territory encompasses the borderlands of Belarus, Ukraine and Poland. There are two versions that explain the origin of the word “Golendry”. This term appeared in the beginning of XVII century: the Dutch called themselves this way (“hollandi” in Latin). Another version is based on the word “gautland” meaning a developed land (“paseka” in Polish), a settlement on a land with uprooted forest  put up by colonists who were called “Golendry” (stumpers, woodcutters, but not the Dutch). The researcher Eduard Byutov came up with a serious argument against the second explanation, saying that these people were the members of Dutch community living under “Dutch law” and carrying Dutch culture. Eduard Byutov emphasized the fact that in the medieval Poland the social stratum of peasants were called “Golendry” (“Olendry”), the settlers possessed a special social and legal status. Thus, the term “Olendry” is derived from a lexeme with the same meaning as the ethnonym of “Dutch” in Polish, it was used to designate a special social group of mixed ethnic composition.

Perhaps, the truth is somewhere in the middle, because the term “Golendry” never served to designate belonging to any ethnic group. From the very beginning it meant a special social group of mixed ethnic composition. Nevertheless, the ethnic composition of this social group evidently included the Dutch, because many cultural elements indicate this.

By the beginning of the 20th century the “Golendry” have retained their distinctive identity which differed from neighboring peoples: despite the fact that they spoke local dialects, their religion was different from the surrounding population. They were Lutherans, unlike Catholic Poles and Orthodox Belarusians and Ukrainians.

A part of “Golendry” migrated to Siberia, primarily, due to the lack of land. The settlers gave old names to their new places of residence: Zamusteche, Novyna and Dakhny, in memory of those times when they lived on Bug. The villages were renamed in Soviet times (now these are Pikhtinsk, Srednepikhtinsk and Dagnik).

It is curious that no one was particularly interested in the Pikhtinsk “Golendry” before the beginning of the 1990s. Only in 1930s and during the Great Patriotic war their obviously German names and surnames attracted the attention of state authorities, which caused certain consequences. However, “Golendry” were lucky not to be deported (because they already lived in taiga) and not to be shot. In the course of peaceful Soviet life “Golendry” had little difference from the rest of people, except that two Pikhtinsk Soviet farms consistently showed high results, year after year. In 1970s they were doing so well that the residents of Pikhtinsk returned to their native villages from the cities: they built a branch of a clothes factory, a bakery, and a post office there. There were three large elementary schools for three villages, a rural health post, shops, and a kindergarten. After Perestroika (society reconstruction in 1990s) their prosperity was over, the residents of Pikhtinsk once again moved to the cities. Nowadays the number of people registered in the villages is larger than that of people actually living there, the number of inhabitants of these settlements decreases every year. 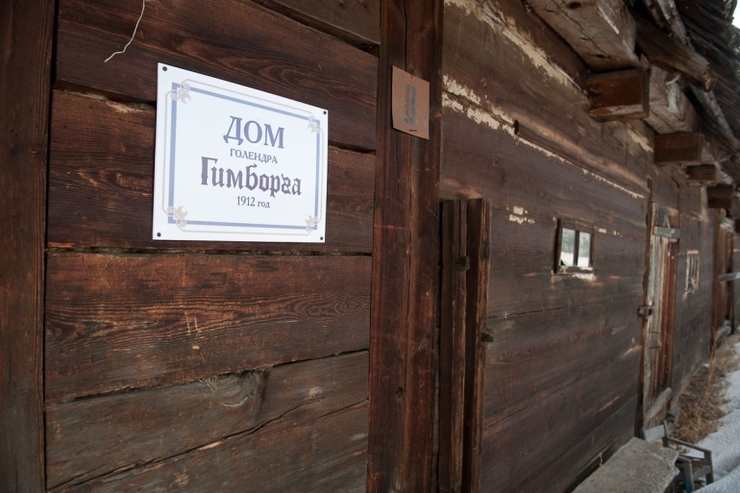 Emptying villages are a widespread phenomenon in Russia, with only one difference: “Golendry” are famous now; they will not disappear in obscurity. By the way, “Golendry” were “discovered” for science by pure accident, thanks to their houses. In 1993-1994 the Irkutsk Central Commission for the Preservation of Historical and Cultural Heritage visited the remote taiga villages and paid due attention to the unconventional architecture of buildings in Pikhtinsk, Srednepikhtinsk and Dagnik. The architecture entailed all the rest, the people of “Golendry” was spoken of as a sensation.

Two museums were established in Srednepikhtinsk: these allow people to look into a real house of “Golendry” without disturbing their personal space. According to the religion of “Golendry”, Lutheran Church, they conduct their prayers in Polish in accordance with the Bible and the collections of prayers. Old people are more religious, young people are not: the situation is common today. So, the holy books in Polish presented in the museum are now read only by old people, even not all of them. It is interesting that “Golendry” use the Julian calendar, just like as Orthodox people.

Lutheran “Golendry” do not have a tradition of regular visits to cemeteries and taking care of graves. However, Russian traditions gradually overcome:  monuments have been erected on some graves of the Pikhtinsk “Golendry”, the relatives of the deceased can sometimes be seen at the cemetery. Nevertheless, you should not go to the cemetery of “Golendry” out of idle curiosity, the residents of Pikhtinsk hate it when someone disturbs the peace of the dead.

Lutheran “Golendry” never had any churches of their own in Siberia. They prayed at home before, and do it now. There is a Lutheran prayer hall in Irkutsk, and the local pastor periodically visits the residents of Pikhtinsk. However, the main rite - baptism - is conducted not by a pastor, but by a local resident. The residents of Pikhtinsk themselves find it difficult to answer why they chose exactly that person. Most likely, because he is a pious man and is respected by everyone. In addition, waiting for the pastor to come or taking the babies to Irkutsk is simply inconvenient.

The museums are telling about the wedding ceremony in large detail: “Golendry” still celebrate their weddings by old traditions. A cap, the most memorable detail of the local women’s attire, is also associated with the wedding. Women wear a cap instead of a veil on the second day of marriage. There is also a tradition to bury women with their cap on. During the rest of the time the capes are no longer worn, except that they can be worn for tourists.

If you want to get acquainted with the life and traditions of “Golendry”, you will have to drive almost 300 kilometers from Irkutsk, or reach the Zalari station and then move 93 kilometers in the direction of Srednepikhtinsk. After this people “was discovered”, it became much easier to get to the places of its residence, but one should take care of the tour and overnight stay in advance.