The Moscow Triumphal Arch became a bridge connecting different pages of the Irkutsk history. Both in the 19th century and now it is perceived as a symbol of Irkutsk that has welcomed all travelers, statespersons, writers who have visited and are still visiting the capital of Eastern Siberia.

The tradition of constructing triumphal gates (arches) originated in ancient times and was associated with the need to memorize some epic events. The first construction of this kind in Russia was erected in Moscow in connection with the success of the Azov Campaign of Peter the Great in 1696. 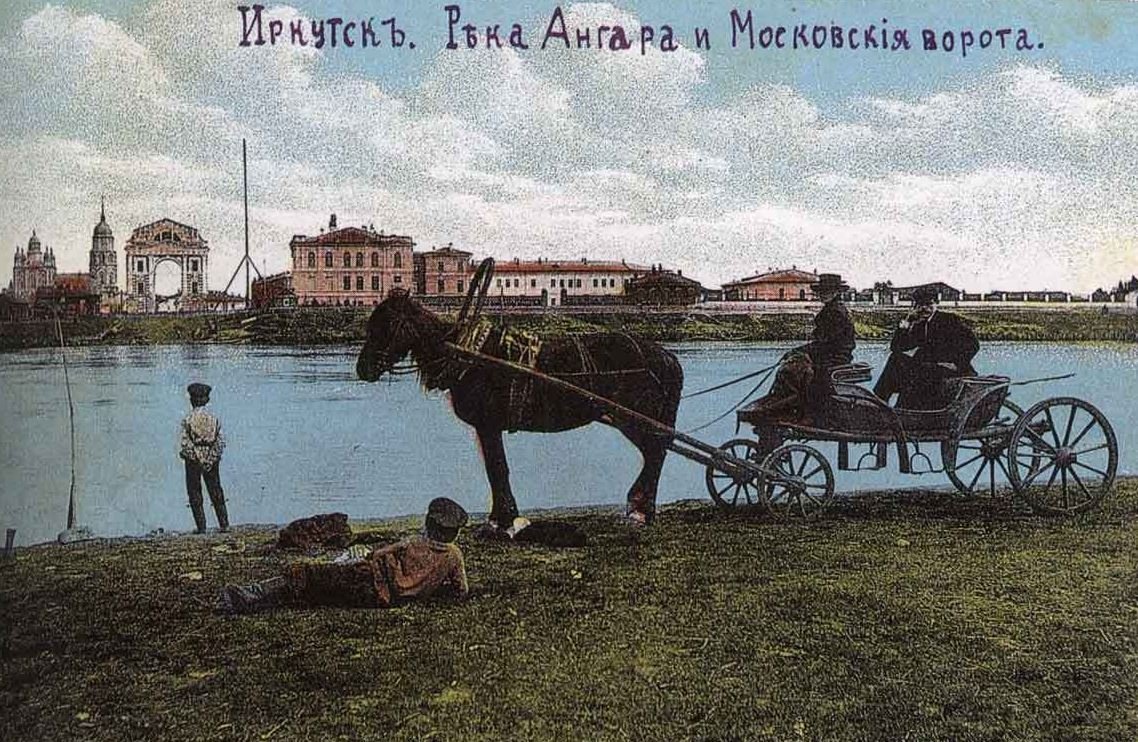 The peculiarity of provincial cities, including Irkutsk, was the creation of triumphal arches in honor of the arrival of high-ranking persons, primarily representatives of the ruling family. On top of that, Irkutsk was the first city in Eastern Siberia where they began to erect such structures for the first time, starting from 1789 (when the first Irkutsk Arch on the occasion of the arrival of Governor-General I.A. Pil’ was constructed); there have been six of them until the present time.

One of the city’s most famous attractions is the Moscow Triumphal Gate. Several facts listed below will make it possible to present the Gate’s history.

Reasons for its creation

The official version of the construction of the triumphal gate is set out on one of the two inserted iron planks laid in the base of the pillars of the arch. It says that “these city gate was erected ... on the occasion of the most joyful day of the accession of His Majesty Emperor Aleksandr I to the highest throne solemnly celebrated on March 12, 1811 ...”. By the time of its opening the gate was supposed to show the triumph of the national spirit during the Patriotic War of 1812. But the urban folklore offered other versions as well.

One of the legends told that the gate was being built at that time for the festive welcome to either Aleksandr I or Napoleon, basing on the principle of “who would win the war”.

Another story explained the fact of the gate’s construction by the long-awaited termination of the pestilence that had killed a lot of cattle in the province.

According to some data, the gate was laid on July 9, 1811, according to other information - on March 12. However, without any doubt, the  festival on the occasion of the opening of the arch was held on September 15, when the Moscow Gate was decorated with illumination, besides, a formal banquet in honor of the civil governor Nikolai Treskin and Bishop Veniamin I was held on the top floor, in the so-called tea room.

The modern Dekabrskikh Sobytiy Street (“The Street of the December Events”) was earlier called Laninskaya, and even earlier - Moskovskaya. It was the main entrance highway of our city. So the gate which quite naturally called Moscow  Gate (“Moskovskie”) appeared at the intersection of the streets of Moskovskayand Laninskaya and the Lower Embankment of Angara at the exit (entrance) from (to) Irkutsk to the Moscow highway, towards the European part of Russia.

The creators of the gate

The gate was created during the period of governing of the Siberian Governor-General I.B. Pestel and the Irkutsk Governor N.I. Treskin. The second insertion plank contained the surnames of city government figures, including: Mayors Aleksei Myasnikov, Ivan Bazhenov; municipal councillors Gavrila Belogolovyi, Aleksandr Sibiryakov, Aleksandr Lychagov and other persons. The gate was erected directly pursuant to the project of the provincial architect Ya.A. Kruglikov.

The outward appearance of the gate

The Moscow Gate had successfully fit into the complex of the city’s coastal system of buildings. The construction was seen from afar as one approached Irkutsk, for it represented a four-tier building 19 meters high with a width of 7.1 meters and a length of almost 16.5 meters. The gate was built based on Russian traditions - of bricks made on the chicken egg solution. After that they were covered with plaster, painted yellow-orange and white (finishing) color. The facade had a symbolic molding on it, and on the inside the gate had premises of different purpose.

It is difficult to determine the precise architectural style of the arch, because it combines Empire, Renaissance and Romanesque styles.

The purpose of the structure

Each tier of the gate and its columns had rooms of different purposes at different times: those who came to the city were welcomed by special officers of the outpost located on the first level; the floor above this had a guard room; the third floor contained an observation post; the top tier had a tea-room (a small hall for welcoming and farewell ceremonies). Thus, the arch performed several tasks at once: it led to the route heading to the European part of the country, performed the functions of an outpost, was a water rescue station, was used for formal banquets. Since 1880 the upper floors of the arch have been used a place for storage of documents of the provincial archive.

Dismantling of the gate

The maintenance of the gate required serious financial investments, as they gradually deteriorated due to the weakness of the foundation, which was aggravated by several earth shocks of 1912 which tilted the structure towards the Angara River. Despite the outrage of the public, the city authorities could not find money, and the arrival of the Bolsheviks finally resolved the situation. In 1922 a decision was made to dismantle the gate, which was accomplished in 1925 (according to other sources - in 1928).

Revival of the arch

The question about the restoration of the monument once again arose in August 2009, in honor of the 350th anniversary of the city. Initially, it was clear that it would not be possible to restore the monument on its historical site, and the modern analogue was erected 20 meters away from its prototype. The reconstruction project was supervised and funded by E.G. Devochkin who donated the Moscow Gate to the Museum of Irkutsk History.

The Gate was solemnly opened on September 14, 2011, at that, it has been erected in a record-breaking short time of 3 months. The current construction has almost historical parameters, but it has been built with the use of modern technologies. Its address: h. 8/1, Nizhnyaya Naberezhnaya Street (“Lower Embankment Street”).