Horror Stories from Baikal: the Great Bogatyr Rock and the Red Lights

The legend about the Bogatyr Rock has been told among the peoples of Baikal for many centuries. Little boys were brought here right after they were born because it was believed that thus they would gain great power; even today they hold the rites of the fire spell in that place...

The Great Lake is hiding a lot of mysteries and secrets; many of them could not be understood by people, so they made up various legends and tales. The memory of the indigenous population has preserved many interesting stories about the majority of natural objects - caves, capes, rocks; sometimes these stories are mystical and frightening.

A rocky Bogatyr (“Warrior”) cape which was previously called Ognenny (“Fire”) is located in the middle of the western coast of the Island of Olkhon, not far from the village of Khuzhir, between two capes - Tataisky and Burkhan.

It has long been considered that his rock and the Shamanka Rock crowning Burkhan are interrelated, complementary to each other in terms of the places of power.

The Memory about the Great Warrior 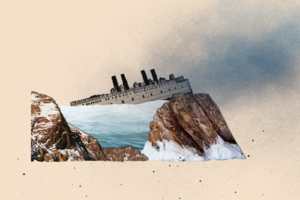 The Sea Driving People to Tears: the Largest Wreck of Lake Baikal

If you look at the cape at a certain angle, you can clearly see a rocky cliff resembling a head of a warrior wearing a helmet. Therefore, its second name, Bogatyr, was most likely given by Russian settlers who came to the coast of Lake Baikal.

An old legend says that a terrible and deathly epidemic attacked the village of Olkhon long ago. Nobody knew how to treat the new disease, but the most frightening fact was that only men, including boys and old men, died from the unknown illness. Only one warrior in the entire district remained healthy and unharmed. The women of the island came to him, fell on their knees and prayed, asking to plead for them before the guardian spirits of the Island, to find out what people had done to infuriate the spirits and how the reasons of the deadly disease could be eliminated.

The warrior agreed to help the residents of the island, appealed to the spirits and found out that they could undo the spell and make peace with people, but the price they asked for was really too much – the life of the noble warrior. So he disappeared into the depths of Baikal. However, a rock looking like the hero's helmet appeared on that place. Now the warrior stands as an eternal guard protecting the island and its inhabitants from evil visitors. And for this purpose he has a fire shield: if necessary, the hero waves his shield, sending a pillar of fire into the sky; due to this phenomenon people often called this place “The Cape of Fire”.

The Legend about the Wall of Fire

A story about a vertical wall of bright flame that sometimes appeared in front of the cape out of the blue has been passed down from generation to generation; however, it was impossible to get burns when touching this wall. But this wall was an obstacle for people with evil thoughts.

Where can the roots of this story be found?

The Russian explorers sailed to the western edge of Olkhon allegedly at the end of the 16th century, but they were unable to dock and disembark there. A whirlwind of flame burst from the depths of Baikal in front of them, rushed forward and closed the entrance to the sacred land for the strangers.

But it was not an isolated case. Mysterious red flashes with orange and blue tints were seen during the following centuries, even by the people who were far from mysticism. One of the members of the Krasnoyarsk ethnographic expedition working on Baikal in the mid-90s of last century described what happened to them as follows: the shaft of fire appearing before their eyes cast a spell so that it was impossible to take their eyes off it. People ceased to perceive the space around and time, experiencing some kind of incomprehensible bliss. Some of them felt as if their bodies were trying to reach the mysterious pillar of light, heading up towards the flame.

People state that it was no coincidence that the soldiers of Genghis Khan liked this cape so much.

The essence of this abnormal phenomenon is not truly known. Maybe these are spellbinding mirages that are sometimes used by the mystical Baikal to please its guests. Or maybe this is an atmospheric phenomenon uncharacteristic of the lake, as the northern lights. Because bight flashes and multicolor rainbows can be seen here at night...

The Place Where Shamans Perform the Rites of Fire Spell

The Bogatyr Rock has possessed incredible magnetism for the representatives of shamanistic beliefs until now. The shamans are still convinced that the cape is waiting for its Master; and the person who is chosen by Bogatyr will obtain knowledge of the mysteries of spells of the elements of nature - fire, water, wind.

Mental and astral power of Bogatyr clearly personifies the male principle. And it is no accident that until the beginning of the twentieth century the locals had brought male babies to the cape and left them there for one night, believing that this would give them strength, health and longevity. The representatives of the high society – leaders and elders – brought here their newborn heirs, hoping that their successors, future warriors, would acquire special body and spiritual powers in that place.

Buryat shamans are still performing the rites of spells of natural elements on the cape even nowadays.