A change in public consciousness is the process of fundamental transformation of the worldview of human society. It happens due to objective reasons, as a rule, changing the ideological principles of the previous era. A modern person can hardly remain calm trying to imagine the attitude to older people during antiquity and even later epochs.

“Putting One’s Father on a Sled”

Elderly people did not always enjoy the care and respect of their relatives and tribesmen. Unfortunately, they had been considered a heavy burden for their family for a long time, so this issue was resolved drastically – by killing the old folks. In ancient Greece they were thrown off a cliff. In Iceland the elderly were condemned to death from starvation until the medieval period. Until the 19th century, poor people in Japan got rid of their oldest family members leading them to the mountains and leaving them there without food or support.

The same cruel tradition existed in pre-Christian Russia where there was a rule of eliminating people who could no longer take care of themselves. Old people were either taken far into the forest and thrown to wild animals or to starve to death, or else they were kept locked up in an empty cold hut until their death hour or put into an empty pit in a barn or a threshing floor, or drowned in a water reservoir.

Sometimes, they tried to “ease” the death throes and killed old people by striking their head with a hammer.

Russian vocabulary had expressions “it's time to go to a wood block” or “it’s time to be put on a sled”.  The sled was used to bring an elderly person to a deep ravine, put him/her on a wood block (a layer of tree bark) and pushed into a gorge.

Of course, all this happened not because ancient Slavs were very cruel. These traditions had ritual nature and were predetermined by ideological factors.

The traditions of attitude of peoples living along the coast of Lake Baikal towards the elderly were almost the same.

Before Yakuts took their parents to a deserted place on a sled, they dressed the elderly in new clothes made of white deer hides, and when an old woman was doomed to such a death, they used to say that, for example, she would be taken to a wedding and fed the best delicacies for the last time.

Mongols had a really horrible procedure: burying the elderly in the ground alive. Their language had corresponding proverbs, such as “a grandson strangling his grandparents”, “a terrifying old man waiting to see his great-grandchildren”. Such methods had been used until the 18th century. 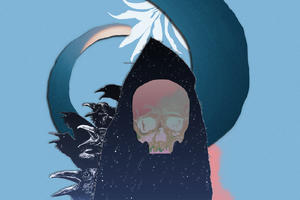 Buryats had a ceremony of “Khermen zegete-aba”. When a person reached the age of 70, he or she was believed to cross a certain line. A feast was held for the old person where his/her grandson put a ribbon of lamb fat in his grandfather's (grandmother’s) mouth and pushed it down his/her throat with the help of a long bone. As a rule, during this procedure the old person died.

Ethnographic historians think that the ritual of killing old people is explained not only by difficult living conditions, but also by religious cults, because these had the elements of sacrifice. People believed that if a person died from an illness, then an evil spirit would devour him/her, and the deceased would turn into that spirit after death. Thus, the deceased could do harm to his/her living relatives, therefore, the relatives should help the old person to die, thus his/her spirit would strongly support them.

The majority of Yakut old people allowed to kill themselves quite consciously. They knew that their children did not want their parents to be eaten by “abasy” (devils). The following abusive phrase addressed to a son who allowed his father to die a natural death was recorded by one researcher at the end of the 19th century and is widely known: “A black dog that allowed the devil to eat his father!”.

The genuineness of this attitude to the elderly is also confirmed by Baikal legends.

The Legend of the Golden Bowl

In the wild Yakut taiga, locals tell an amazing legend about the distant Bayagal (Baikal) Sea, about an evil and cruel king and a golden bowl. This legend says that a very beautiful woman lived the bottom of Bayagal, and she was holding a golden bowl in her hands. The king was cruel and greedy and wanted to take possession of the beauty and her golden bowl. He began to send his brave young men there to get the woman, but none of those men ever came back.

At the same time, the kingdom had a custom, according to which old people had to be killed. But there was a young man who loved his father very much and violated this cruel rule. He was hiding his blind father. When it was the young man’s turn to dive into the sea for a golden bowl, his father told him that the beauty holding the bowl did not really live on the bottom, but was sitting  above it on a high mountain, and only her reflection could be seen in the waters of the Bayagal Sea. So the young man climbed this mountain and brought the beauty and the bowl to the king. After this, the cruel king disappeared without a trace. Then the rule of killing old people was abolished.

A similar legend can also be heard from the local residents of the Baikal region - Buryats.