Are you ready for a thrill? We decided to take a look into the past and learn to know about the black shamans of Lake Baikal and “cannibalistic spirits” connected with those...

It is always interesting to read texts that were written several centuries ago. The peculiar language and narrative style of the material, the facts that are sometimes completely new for us or information that has been retold by dozens of people and obtained a modern interpretation which is completely different from the original source.

Matvey Nikolaevich Khangalov was a unique expert in the field of ethnography of the Buryat people, the history of their beliefs and culture in XIX - early XX centuries. Matvey Nikolayevich was a patriot of the Buryat nation, a science communicator, a national teacher, a folklorist... He wrote a number of interesting articles on the basis of the results of the expeditions organized by him to study shamanism; these works included the article titled “Cannibalistic Spirits of Buryats. (Revisiting Human Sacrifice)” published in Ethnographic Review Journal in 1895.

We will quote the words of Matvey Khangalov concerning this aspect of human life.

The existence of cannibal spirits and the “dolyo” rite is a sufficient proof of the fact that Buryats once had such sacrifices. This is also confirmed by the words of invocations of black zayans, for example:

Red blood is a drink,
Human meat is food,
Black wine is a skill (wisdom),
Black scum of the pot,
Food as black as tar...

Eastern khats and tengerins (“khat” is a ruling deity, a son or a grandson of tengeri; “tengerins” are celestial gods that include the good “white” western and evil “black” eastern ones), are considered the patrons of black zayans and shamans, besides, these deities are also cannibals .

Black shamans are the representatives of black zayans, oriental khats and tengerins. Buryats usually say that black shamans eat people even now, although now this is not true.

A modern black shaman, according to the Buryats, does not literally eat a person, only a person’s soul, with the help of his patron spirit - black zayan.

Black shamans were considered cannibals; people disliked and feared them for being cannibals and causing various misfortunes and illnesses. Even now Buryats are afraid of them, although human sacrifices no longer exist.

This is the evidence of cannibalism of black shamans and their patron black zayans, khats and tengerins.

The Scary Rite of “Khun-dolyo” 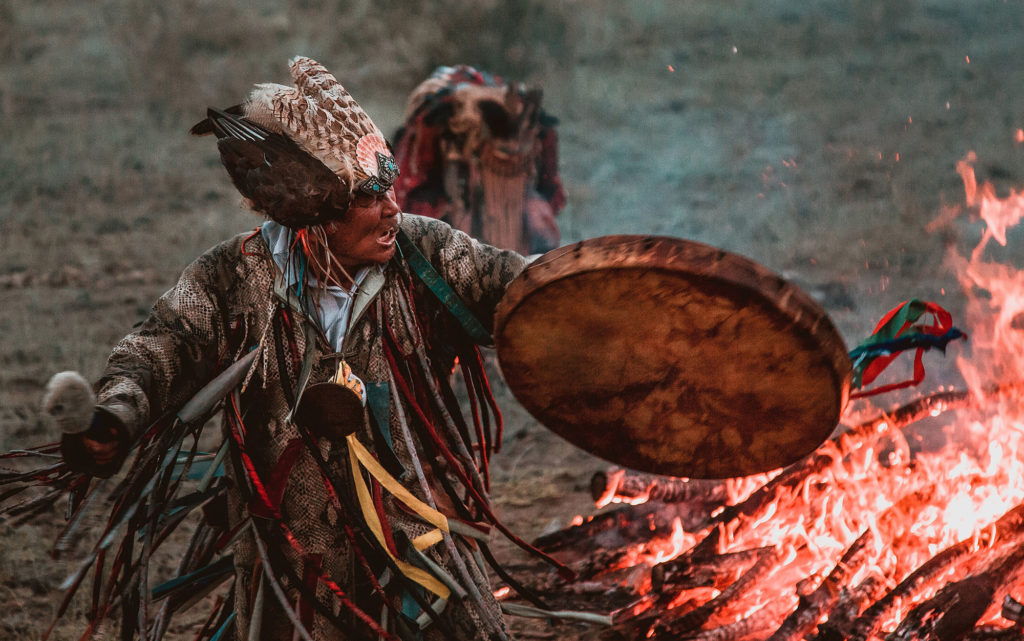 The religious rite of “khun-dolyo” was held to sacrifice a sick person to a black zayan; this meant that the spirit would give another person instead of the sick one, i.e. the sick person would be replaced by another and the black zayan who sent the disease to that person would be appeased. After that the black zayan would accept a human sacrifice and show mercy, granting recovery to the patient. This is called “dolyo” in Buryat language, which means “replacement”. Here is the legend about the “dolyo” rite.

Once upon a time there lived two brothers: the first brother was Tömö, a warrior, and the other brother was poor Termu. Once rich Tömö fell seriously ill; as a result, he went to the black shaman who said that the sick person had to offer human sacrifice, i.e. perform the “dolyo” rite. So Tömö performed a religious ceremony. Tömö had a house maid called Borzhikhon; the black shaman chose her, she was sacrificed according to the rite of “khun-dolyo”, the way they sacrifice animals nowadays in such cases. They began the rite of “khun-dolyo”, made all the preparations, and then killed Borzhikhon. After that, they went out into the steppe: in accordance with the rite, they made a fire putting the sacrificed body on top of it, with the head to the southeast, and burned it. However after this religious rite of “khun-dolyo” the rich man Tömö died; this meant that the black zayan did not accept the “khun-dolyo” sacrifice.

Another legend says that the rich man Dono had one son who fell very ill. Then, following the advice of the black shaman, they performed the religious rite of “khun-dolyo”, for which they chose a man, one worker out of 25. After this rite, the son of Dono recovered. This meant that the black zayan accepted the sacrifice, taking the soul of the worker for the soul of Dono’s son.

Thus, Buryats replaced a sick person with another one in olden days, during the religious “khun-dolyo”, whereas in our days they offer animal sacrifices. According to Buryats, if a person falls seriously ill and must die by the will of zayans, then he or she still can recover with the help of a good shaman by giving some animal for “dolyo” instead of himself/herself; if the animal cannot be accepted by zayans, then it is possible to offer some “stranger” - a neighbor or a relatives - instead of the sick person.

Back then, if a good black shaman was called to cure a severaly ill and dying person, then the patient’s neighbors and relatives were very afraid that the shaman would take life of one of them in return for the patient. Therefore neighbors and relatives took precautions: they a made large fire in the yurt and did not sleep all night long, because there was a belief that it was difficult to take a soul from a person who is awake – the soul refuses to leave the body, but a soul of a sleeping person could be easily expelled from the body and caught.

In our days this custom has (fortunately!) ceased to exist, nevertheless the memories of these rites remain, clearly proving that they were real.