The Beauty and Usefulness: an Important Detail in the Costume of the Indigenous People of Baikal

The costumes of the indigenous peoples of the Baikal region are beautiful and unusual. One of the most ancient items of clothing is the Evenki breastplate, which served the ancient Baikal peoples both as a protection from the cold and decoration even before Christ... 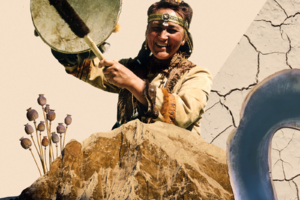 The costumes of the indigenous peoples of Baikal can help people imagine the history of culture and everyday life of Evenks (Tunguses) and Buryats. And even if you did not know that the traditional Evenki occupations were fur trade, reindeer herding and fishing, the details of the costume will be able to tell you about it. Before they familiarized themselves with the Russians, comfortable Evenki clothing adapted to the Siberian colds was made of beautifully dressed reindeer skins. Its functionality and usefulness were confirmed by many details, including, without a doubt, the so-called chest plate that should be emphasized. This clothing detail may be for every day and for celebrations. And such a detail of the Evenki costume embroidered with colorful beads and decorated with fur is exposed in the History Department of the Irkutsk Regional Museum of Local History.

The Way of the Chestplate to the Museum

The history of acquisition of this exhibit by the museum is extremely interesting. It began in 1930.

Today the fact of selling Russian cultural values abroad ​​ in the first years after the revolution of 1917 is widely known. But few people know that this tradition continued in the 20s and 30s of XX century. Moreover, the need for funds for the first five-year plans raised the question of involving … local history in this process, in order to identify new types of export goods and the organization of their procurement. Such goods were supposed to be “scientific materials”: objects of national everyday life, including the peoples of the Siberian region: it was supposed to use them for compiling ethnographic and archaeological collections for foreign universities and museums. Thus began the work of the Nizhnetungusskaya ethnographic expedition consisting of the leader, ethnographer and archeologist P.P. Khoroshikh and an employee of the Irkutsk Museum, Head of the Ethnographic Department, P.G. Poltoradnev.

Fortunately, the most part of the collections gathered throughout Siberia turned out to be unclaimed, and the findings replenished the museum funds.

An interesting case. Historians argue that the “birthday” of the Evenki breastplate is I millennium BC, that is, the Aeneolithic times. During the excavations of the ancient burial on the Angara River it was found out that the clothes on the remains of a human skeleton were decorated with the contour of shells corresponding to the shape of a breastplate.

An Indispensable Detail of a General Tungus Costume 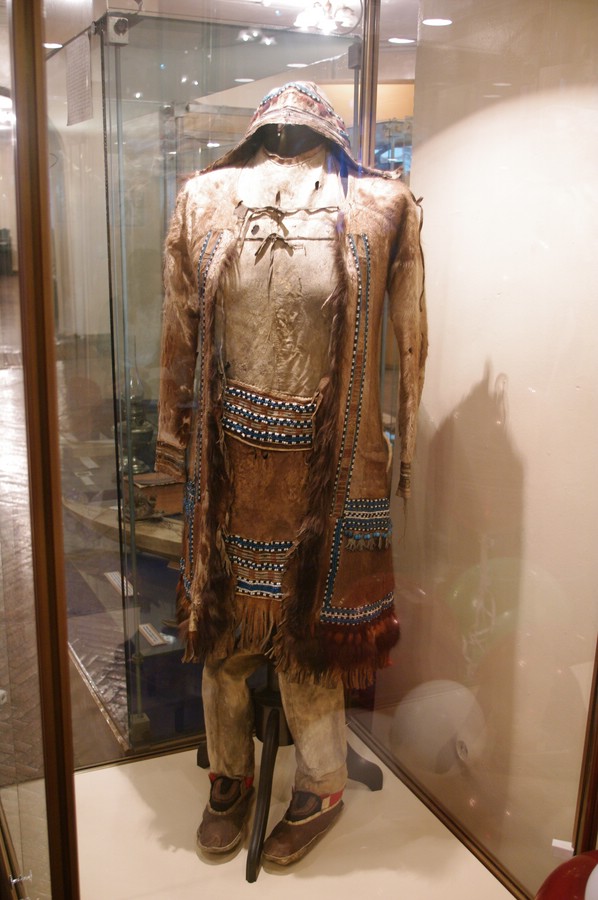 A characteristic feature of costumes of all Tunguses, both Western and Baikal ones, is the presence of a certain set of elements: a kaftan that is so narrow that it cannot be fastened on the breast, a breastplate, a girdle, gaiters (long covers without a sole, covering the ankles, connected to a gridle or belt with straps) and unts (high fur boots). At that, the male and female kaftans, unlike the breastplate, looked in the same way.

A breastplate was made of dressed deer skin, a piece of skin 70-80 cm long was needed. The result was a peculiar, vertically elongated trapezoid or rectangle. Its purpose was to protect the chest and throat from the cold. The breastplate covered the body above the knee, it was fastened on the neck and waist with the help of strings .

There were also festive breastplates (ngel) decorated with ornaments, beads, fur. They could replace a men's shirt.

The breastplate as a part of the Evenki costume did not emerge by chance. The necessity of wearing this clothing item was predetermined by the actual unfastened cut of the kaftan, only one skin was used for sewing it. However, in addition to its rational purpose, a breastplate also performed an aesthetic function, decorating clothes. Above all, it was possible to determine the belonging of the breastplate’s owner to certain genus, judging by the breastplate.

For winter clothing, the Evenks used fur, dressed deer skin, and later - cloth. As a rule, the main material was “provided” by deer, sometimes elks. The Evenks in Baikal region widely used the skins of ringed seals and Siberian marmot. It was no coincidence that such an unseemly material was used to make a costume: valuable furs were used for sale.

Even in ancient times Evenks possessed excellent skills in processing leather and fur: they made amazing quality products. But this process was long, difficult, time-consuming, and the result was achieved due to incredible perseverance and enormous physical efforts.

The dressing of skin included a series of consecutive steps. The skin taken away from carcass was thoroughly cleaned from flesh and fat, dried in the open air, and then scraped. The stage of drying and scraping was completed by “smoking” in a specially constructed raw-hide tent (“chum”). Then the skin was soaked and milled. Interestingly, there were no chemicals; instead, they used handy means. The skin was soaked with tannins extracted from the substances that are disgusting for modern people: animal brains, animal boiled liver or sour milk.

The most frequently used colors for finished products and decoration elements were yellow, red, black, blue and white. It should be taken into account that initially the skin was yellowish-gray, uneven, unattractive. But it was dyed in yellow-brown tones, with the use of natural vegetable dyes and “smoking” over a low fire.

Special attention should be paid to the finishing of clothes in general and the breastplate in particular. It was made of fur, cloth, beads, dyed deerskin, horse and goat hair, braid, leather, reindeer hair, multicolored threads and metal patches.

Patterns conveyed deep meaning. They were created for centuries not just in vain, but symbolized and emphasized the natural connection of the Evenks with wildlife - the sun, earth, plants, animals...

Breastplate patterns were incredibly diverse. As a rule, the painting was positioned symmetrically in relation to the vertical axis.

The most remarkable was, of course, women's breastplates.

As a rule, they were decorated with an ornament of strips of multicolored fabrics, interspersed with pieces of deerskin and small ropes of reindeer hair taken from under the animals’ neck. The breastplate was embroidered with dotted patterns of beads of blue, yellow, white and black, resembling a “bird’s footprint”. Moreover, narrower black beads were inserted between the white, golden and blue stripes of beads, setting them off and separating them.

The multicolored patterns on a breastplate gave it elegance and beauty.