The Wheel of Life: How to Apprehend the Ornamental Pattern of Buryats

Buryat ornamental patterns and figures convey ancient sacred symbolism. They express the beliefs and lifestyle of the most ancient people of Lake Baikal.

We can endlessly talk about national costumes and their individual elements. It is extremely interesting that all the details of costumes of the indigenous peoples of the Baikal region usually played a purely practical role, depending on the occupation, climatic conditions of residence and gender of the costume owner. It is no accident that the system of decorating clothes reflected the features of cultural traditions, had a symbolic meaning and was directly connected with the picture of formation of the universe model.

Buryat ornamental patterns have their own name – “ugalza”, which is translated as “patterns”. They have no random signs and symbols. All of them can be “read” like sentences in the book, carrying the accumulated and transmitted knowledge and experience.

Patterns include natural elements and phenomena, the change of seasons, diversity of the fauna, richness of the green cover of the Earth...

By deciphering the semantic content of Buryat patterns, people become convinced that the figures drawn there not simply convey the attitude of ancestors to nature, but also clearly reflect their admiration for it. Therefore, ornamental patterns were not simply figures, but a special spell, not a set of beautiful symbols, but a good luck charm protecting from evil forces and expressing of the Buryat’s ideas about the Universe and their place therein.

These figures contain no random elements. All of them are drawn on the basis of the ancestors’ traditions, carefully selected depending on the people’s exact expectations, correspond to a certain color scheme.

There are different versions of classification of Buryat ornamental patterns. 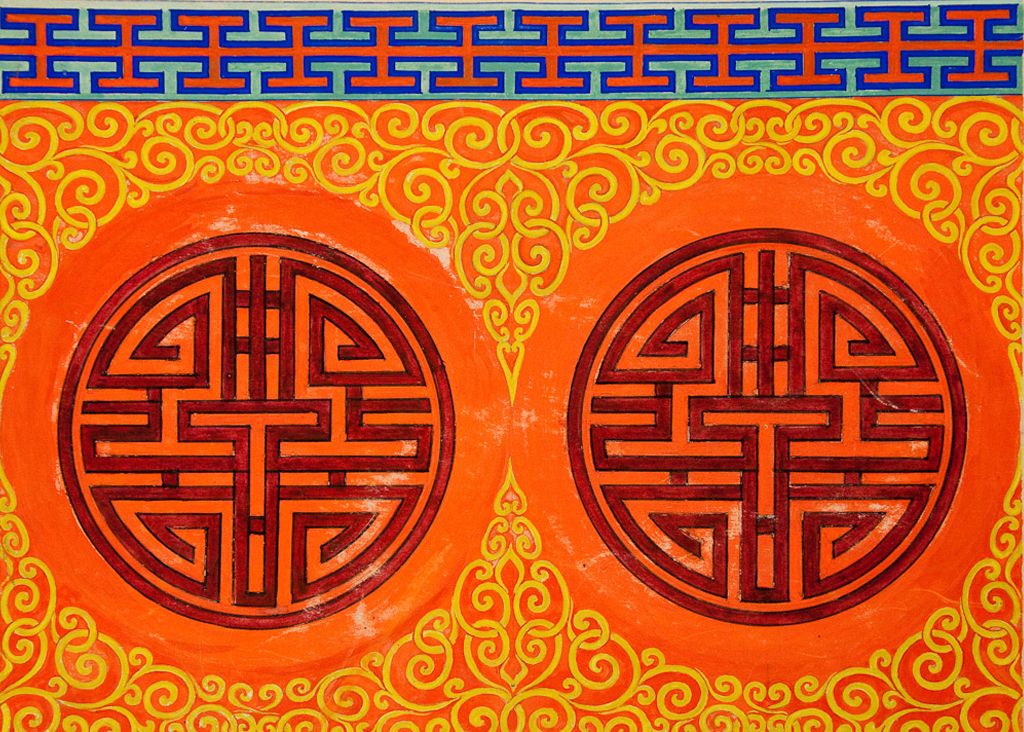 These patterns are represented by a whole set of diverse figures, characterized by incredibly great variability of use. This group includes points, lines, circles, rhombuses, polyhedrons, stars, crosses... All kinds of Buryat geometric ornamental patterns play a deep sacred role and are constructed, as a rule, according to the so-called law of rhythmic series. In the course of cognition of the surrounding world, ancient Buryats noticed the cyclical nature of the environment, beginning from the change of seasons and ending with the life cycles of plants, animals, people, which was expressed in systematic repetitions of the pattern elements. This repetition, with some changes, for example, in the distance between elements or colors, gives pronounced dynamism to the whole composition.

One of the most common and popular geometric options is a circle symbolizing the sun, moon, and sky. The symbolism of the circle among the Buryats means infinity and cyclicity: they learned it from nature and spread the concept to social relations. The period from birth to death is a movement with the “wheel of life”, where the circle of the expiring year is always complete on the eve of Sagaalgan, and the things acquired during the outgoing year should leave this confined space and begin a new round in the next year.

The purpose of the cross associated with the cult of fire is also interesting: according to the perception of Buryats, fire is a good deity patronizing one or another family. The combination of a circle and a cross in the ornament on individual jewelry of a Buryat bride was associated with the praise of the beginning of the new life by the newlyweds and with the wish of prosperity and fertility to the newly created couple.

Even in ancient times, people tried to depict trees, flowers, fruits, leaves on various surfaces. These elements were perceived as an essential part of nature: people depended on the nature, revered it and were fared by its power.

Buryat floral ornaments are the patterns of leaves, flowers and lotuses. The latter appeared with the onset of Buddhist culture. For Buryats a lotus flower is a symbol of rebirth and victory of life over death.

Floral ornament is directly related to the comprehension of the laws of nature, first of all, the basic one - the law of life and death. A floral pattern is a kind of illustration of the unity of destinies of all living things, where nature demonstrated a continuous process of dying and rebirth of flora and fauna. That is why this ornamental pattern of Buryats is associated with the symbols of motherhood, fertility, strength and vital power.

A floral pattern can be found in the design of household items, costume decorations, architecture; whereas stylized patterns of trees were actively used in the design of mittens. They also liked to use it to decorate quivers, arrow cases, horse harnesses, belts – as a result of blacksmith’s work... 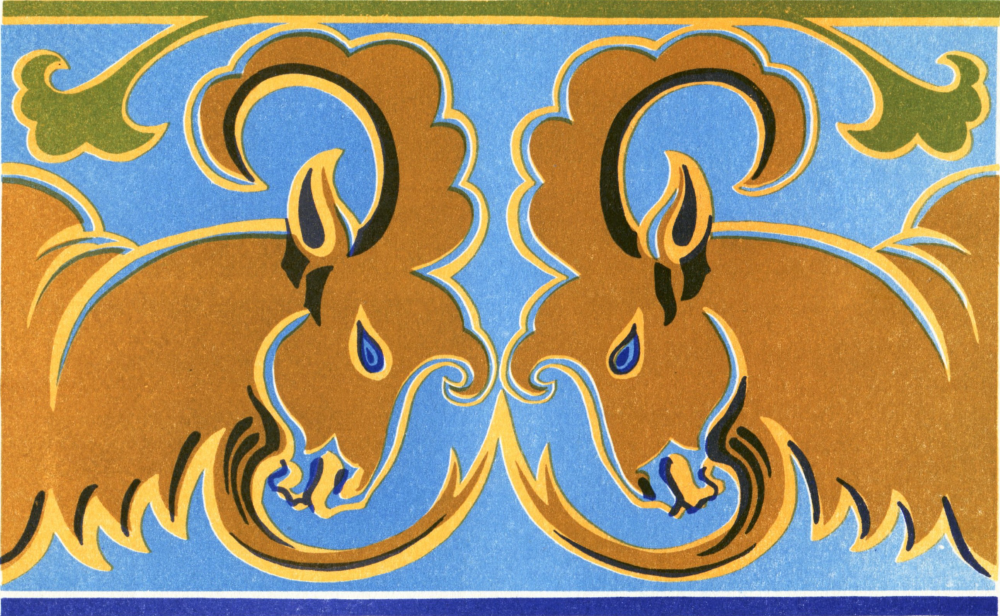 It is based on the stylization of figures (or their parts) of real or fantastic animals, and is even considered to be “older” than geometric pattern.

It is difficult to describe Buryat national art without the images of animals. One should always remember that cattle breeding has been the most important thing for this nomadic people, and the presence of the five main animals (a camel, a cow, a goat, a ram, and a horse) on the ornamental patterns symbolized protection from evil forces.

In addition to the images of a goat or a ram, patterns in the form of their horns were also rather popular. They were used to decorate things, in order to wish wealth and fertility, abundance and prosperity. The “ram’s horn”, for example, in combination with the moon or the sun, was supposed to increase the magical power of the pattern.

Ornamental patterns also included the image of the eagle that was usually placed on the clothes of shamans communicating with spirits. It is especially widespread in the capital of shamanism - Olkhon, where the eagle is called the totem animal of the Olkhon Buryats.