One of the main attributes of the culture of Baikal shamans is a cane - a conductor to the other world, a sign of power and strength which is traditionally destroyed immediately after its owner's death.

Shamanism originated very long ago, but it still has not lost its significance for the representatives of the indigenous population of Baikal, including Buryats. In the course of its development, shamanism encountered various beliefs whose apologists strove to replace shamanism with new values. However, this never happened. Having absorbed the traditions of both Buddhism and Orthodoxy, shamanism has kept its original foundations. This is clear today: for example, the procedure of “preparation” of the costume and the attributes of the shaman still includes 9 stages of dedication. As a result, it takes from 9 to 20 years for a shaman to receive a complete set of vestments and cult objects. This is crucial, because these symbols represent an essential element of the shamanism system.

Shamans depicted on photos, on pictures, and in movies always have a tambourine. But we assure you that a cane is also considered a necessary, significant attribute that transfers its owner to the other world.

The historical department of the Irkutsk Museum of Regional History owns an entire collection of shamanic attributes: according to experts, these include two rarest canes of the end of the 19th century made of iron and wood.

The Appearance of the Shaman Canes and Their Cult Purpose

According to their form, shamanic canes (“horbi”) were very different, besides, they could be made of various materials. There are three types of horbi made in the shape of a horse (“morin”), a snake (“mogoi”) and a man (“khun”). Correspondingly, the cane's knobs were cut in the shape of a horse, a snake, or a human head. The canes were the attributes of all Buryat shamans. Differents shamans owned different kinds of canes.

The canes were made of wood or iron, but they were necessarily sanctified. They were decorated with bells of various sizes, colored ribbons, skins of furred animals, cone-shaped pendants made of tin...

The cane was placed in the lower part of the human body and, objectively, got in contact with the Earth's surface. This means that the cane got in touch with the underground forces, with the energy of the Earth. Moreover, the cane is always understood as an aid, and in our case, it served as a support, a symbol of support of the ancestors. 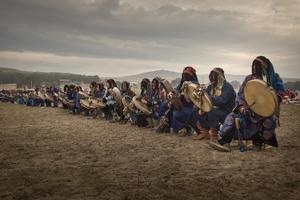 What the Shaman Disease Is or How Baikal Shamans Live

A cane means the following things:

- a means of transfer the shaman to the other world for his communications with gods and spirits that help him, for example, to perform rites;
- a conductor to the country of progenitors;
- a sign of power and the rights of the shaman in the religious life of a certain location;
- a tool for punishing violators;
- aid in healing people.

Buryats firmly believed in the miraculous properties of canes. And it is no coincidence that after the death of a mighty shaman his canes were broken into pieces and used as amulets.

Snake canes are associated with the very meaning of the snake in shamanism – this magical animal could turn a supernatural reality into a physical one.

The famous Buryat ethnographer and folklore specialist M.N. Khangalov believed that, in the olden days, Buryat shamans who had iron “human” canes also received male and female slaves who had to serve these shamans after their death, that means, to be killed and buried together with the dead shamans.

Today we will talk about the most common canes – “horse” ones.

The Appearance of Shaman Horse Canes

Horse canes are a mandatory sign of Buryat shamanism, and local shamans usually had a pair of such canes, representing two horses carrying a shaman to other world. The right staff was, as a rule, longer than the left one. It is assumed that one cane was used to hit the second one. The fact is that during the ritual of communicating with the spirits, the shaman not only waves his canes in different directions, but also hits one cane against the other. According to legend, the canes were painted blue.

The upper end of such a cane was shaped like a horse's head, somewhere in the middle there was something resembling a horse’s knee, and a hoof was cut out below. A mane cut out in strokes had to make the resemblance of the cane to a horse even more clear.

Ethnographers claim that the elements that were added to the cane over the time had their own profound meaning:

- the “neck” of the horse was decorates by a small metal bow, a sabre, arrows, a knife: all these weapons were meant for the battle with evil spirits. There was also a key on the neck used to mysteriously open the door to the sky;

- the middle part of the cane contained miniature copies of blacksmith tools - a sledgehammer, a hammer, and tongs. Buryat religious beliefs were based on the fact that both the skill of forging and the blacksmith's equipment were sent to the Buryats from above by the powerful and severe blacksmiths (“darkhantengeri”). Therefore, the blacksmith tools themselves already had serious magic power;

- the lower zone was the place for attaching a tiny ladder, a rope, a stirrup, a hook, a boat and oars, as well as chains. The ladder represented the rites of initiation of the shaman, and its steps corresponded to number of rites. The hook helped the shaman to push off from this world, whereas the rope, the stirrup, the boat, the oars, and the chains were used to navigate the river on the shaman’s way to the other world.

Above all, each set of objects was complemented by three conical bells.

If a big bell was attached to a cane, then they called it “hese” - a tambourine, because a horse cane could replace a shaman tambourine for Buryats.

What Were the Canes Made of?

They canes were produced from wood and iron. According to M.N. Khangalov, wooden canes were not much different from iron ones, except for the shape of the horse's head. In the first case that was a simple knob, and in the second case it was tilted to the side at a right angle. Another important detail was the fact that the shaman received an iron cane only after his fifth initiation.

Wooden canes, as a rule, were made by a respected old man, preferably from the genus of shamans. They used special birch wood for these canes. A birch had to grow up in a grove where shamans were traditionally buried. The tree had to have a straight undamaged, trunk. The pattern for the cane was cut out “from the side of the sun”, from the birch that was still growing, not from a dead one, in a very careful way. After this procedure, the damaged trunk had to be “healed” – wrapped up in bark, otherwise, if the tree died, the cane would not posses any power, and that would be a bad omen for the shaman.

Iron canes were forged by blacksmiths having shamans or famous “powerful” blacksmiths among their ancestors e.

A shaman is an everyday traveler to the realm of ghosts. For this purpose he needs a special horse hidden from mere mortals. Horse canes were used to represent such horses, and when a shaman received an iron horse cane, this meant that he could comprehend the mysteries of the “lower” world, the most unusual and dangerous place in the Universe.