Johann Georgi and His Journeys around Baikal

We continue to tell you about the great people whose names are forever associated with Lake Baikal. This time we will speak about the German scientist Johann Georgi: our article will reveal how he helped Baikal, what was his way to the lake and which flower was named after him.

There is an opinion that the scientific study of Eastern Siberia, Baikal, Irkutsk started thanks to a whole brilliant assemblage of German scientists whose names were perpetuated on the frieze of the Irkutsk Regional Museum of Regional History: Daniel Gotlieb Messerschmidt, Johann Georg Gmelin, Georg Wilhelm Steller, Peter Simon Pallas, and Johann Gottlieb Georgi.

We will tell you about one of them, Johann Georgi (years of life 1729 - 1802), also called Ivan Gotlibovich by his Russian colleagues. Johann Georgi was a doctor of medicine, professor of mineralogy of the Russian Imperial Academy of Sciences, ethnographer, and a traveler. In 1770 (the date is not generally recognized) he arrived in Russia, was accepted to the service at the St. Petersburg Academy of Sciences. After some time he became a member of the so-called “Physical Expedition” commissioned by Catherine the Great to study the unknown lands of her own state, including Siberian ones.

This ambitious project with its purpose to eliminate the “white spots” on the territories of the northern and eastern provinces of the empire was led by the young 26-year-old professor of natural history of the University of Berlin, Peter Simon Pallas. The task of the expedition was comprehensive study of the vast regions of the country for the sake of discovering their natural potential and prospects for economic development.

The meeting of Georgi with Pallas largely predetermined further scientific preferences of Ivan Gotlibovich. Pallas appreciated Georgi, noting that “Mr. Georgi deserved the highest praise”. Pallas instructed Georgi to inspect Irkutsk, the surroundings of the city and Lake Baikal with the adjacent territories. In March 1772 (according to some data, 1771), Georgi visited Irkutsk and set off on an independent expedition around Baikal, remembering the instruction of Pallas: “The water of Baikal is excellent, its taste is good”. 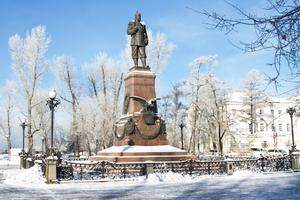 The Capital of Eastern Siberia: Who “Babr” Is and Whence the Tank Came

Georgi had something to compare Irkutsk with. In the course of the expedition, he visited Astrakhan, Orenburg and Tobolsk provinces, as well as Omsk, Tomsk, Krasnoyarsk ... In his opinion, the city seemed prominent among other settlements of Siberia and resembled such educated country as China very much. The interiors were decorated in the Chinese style, there were Chinese paintings, carpets, vases, lacquered and porcelain utensils, dolls inside the houses...

While writing his notes, the researcher recorded the most valuable information about Irkutsk of 1770s, which could not but provoke the interest of his contemporaries.

“The bank of Angara is reinforced by bulwarks (stone structures for protection against waves), no more than 18 feet high, and in some places 12 feet high (1 foot equals 30.48 cm), as a result of this, low parts of the city were flooded with water, which happened, for example, in 1750 and 1755.

A fortress stands on the banks of the Angara, it has the shape of a quadrangle and is surrounded by wooden walls, up to 3 sazhens high (1 sazhen equals 213.36 cm). The provincial office is located in the northern part of the fortress, and a stone church is located in its southern part. A cathedral and a bishop's house surrounded by a stone wall can be found in the eastern part. In the past, the city was also surrounded by an earth rampart, but these days, Irkutsk has grown and spread beyond the rampart line. There are a total of up to 1153 private houses in Irkutsk.

The streets are wide and straight and, not paved, but still clean and tidy. There are 8 churches in the city, only one of them is wooden. The Church of the Savior has a chiming clock, showing the time by the European model, besides, the clock marks even minutes with chimes.

The market consists of two large quadrangular courtyards and includes more than 200 stores. The house of the magistrate is terribly bad, whereas the hospital and the jail are located outside the city limits.

The city has a testing chamber with two melting furnaces. There are 3,000 Irkutsk Cossacks in the city.

The police are wonderful, the streets are guarded by mounted policemen at night, you don’t see any drunk people in the city, you don’t hear their disgusting songs; in case of a fire, rescue team comes very quickly.

Georgi spent a winter and a summer in Irkutsk, he got interested in agriculture, noting that the farming in the city was not fruitful due to the early advance of the “great frosts”. He also familiarized himself with the local methods of growing hops.

Travels around Baikal and Their Results

The trip along Baikal and Transbaikalia lasted for almost two years. It could not by any means be called an easy one: a new severe climate, no roads, unreliable boats, lack of food and money, the threat of unknown contagious diseases... However Georgi, who was older than 40 years then, survived the difficulties of field life with dignity.

We can call Johann Georgi a pioneer, a man who was the first to sail along the entire coastal edge of the lake, made a detailed description of the things he saw, paying particular attention to the mountain ranges surrounding Baikal. He reached the mouth of the Selenga River and stopped there, observing the way Baikal gets covered with ice with great interest, later the scientist emphasized the incredible transparency of the lake’s water. The scholar also became acquainted with the nature and landscape of the eastern coast, from the mouth of Verkhnyaya Angara to the mouth of the Barguzin River.

Such a thorough study of the territory allowed Georgi to be one of the first (after Pallas) to propose a version of the catastrophic, disastrous (tectonic) origin of the lake. He wrote that, most probably, during a strong earthquake, a part of the valley of the Verkhnyaya Angara River sank, and Baikal appeared in the place of this depression. The proof of this fact is presented by “strongly dissected mountains on the coast, steep and rocky lake coast, rocky coastal islands - the fragments of former mountains, as well as immensely deep waters near the cliffs...”

At the same time, Georgi was engaged in survey of some parts of the lake coast, when he traveled on a flat-bottomed boat together twelve more sailors: he visited the Maloe More Strait, Olkhon, and Chivyrkuy Bay... The result of this survey was a map of Baikal with a scale of 10 versts per inch (1: 420,000).

The travel made it possible to collect information about the fauna of the lake. Georgi was the first to study the Baikal omul  (Arctic cisco) in such great detail, defining it as a “wandering whitefish”; he gave a more detailed characteristic of the ringed seal - the “Baikal seal”, tried to compile a list of fish of Lake Baikal; studied the features of the catch of fish and seals.

In his notes, Georgi sufficiently covered the specifics of the fauna and flora of the coast, identifying more than 730 species of Baikal flora. Besides, he compiled a herbarium of unique local plants.

One more direction of the expedition activities of Ivan Gotlibovich will forever link his name to the Russian science. In fact, he created the first ethnographic work in Russia (“A Description of All the Nationalities That Inhabit the Russian State, Their Everyday Rituals, Beliefs, Habits, Dwellings, Clothes and Other Features”) which contained a unique set of information about Baikal “foreigners” - Buryats and the Tunguses, their resettlement, lifestyle, spiritual culture, shamanism...

One of the most beautiful flowers once brought from South America to Russia is called after Johann Gottlieb Georg in Russian – “georgin” (which means “dahlia” in English). Such Russian name was assigned to the flower by the botanist Carl Willdenov in 1803.