Imperial House in Irkutsk: the Route of Nikolai II

The education of the future heir to the throne was taken very seriously by the imperial family. The final stage of education, as a rule, was a journey of the Crown Prince through foreign countries. However, visits to different places of his vast homeland were also an important part of his imperial duty. Irkutsk and Baikal became significant destination points during one of these visits

The journey of Nikolai Aleksandrovich was unusually large-scale, included water and land parts. The return to St. Petersburg took place overland for the first time for the trips of this kind, so the heir to the throne spent more than a month getting acquainted only with the territories of Primorye, Amur River region and Transbaikalia. His most important task was to lay the Trans-Siberian Railway on May 19, 1891 (the dates are given by the Julian calendar) in Vladivostok.

However, the future Emperor, of course, came to Irkutsk from Baikal: on June 23 (July 5) the Crown Prince Nikolai arrived in Irkutsk by the “Speransky steam-vessel. A lot of descriptions and photos of this visit have been preserved. And all contemporaries are unanimous telling stories about the large-scale preparations of the city residents for this event, about the scale of decorating houses and governmental institutions, about the huge number of decorative components - flags, monograms, garlands of flowers and greens.

You can imagine the route of the future last Emperor through Irkutsk, creating a kind of modern tourist route; anyone can do this today.

The fourth stone triumphal arch in the history of Irkutsk erected after the project of the architect V.A. Rassushin stood at the festively decorated Tikhvinskaya Square (now Kirova Square), near the majestic Kazansky Cathedral (destroyed in 1932, the building of the administration of the region was erected in its place: 1a, Lenina Street). Its historical place was located at the intersection of the modern streets of Nizhnaya Naberezhnaya and Sukhe-Bator, a hundred meters closer to the Epiphany Cathedral, farther from the monument to the Cossack Yakov Pokhabov. Long and wide stairs led from the arch to the steamship wharf of the Angara River, the Crown Prince made his first steps on the Irkutsk land on these stairs. There were platforms for meeters and greeters on both sides from the stairs, these platforms were jam-packed with jubilant residents of the city.

According to the descriptions, the triumphal arch (it was also called “the arch of the heir - Crown Prince”, “the Tsar’s arbor”) was made of red brick, without plaster, where the ornately shaped poles were topped by faceted steeple-roofed tents crowned with two-headed eagles. 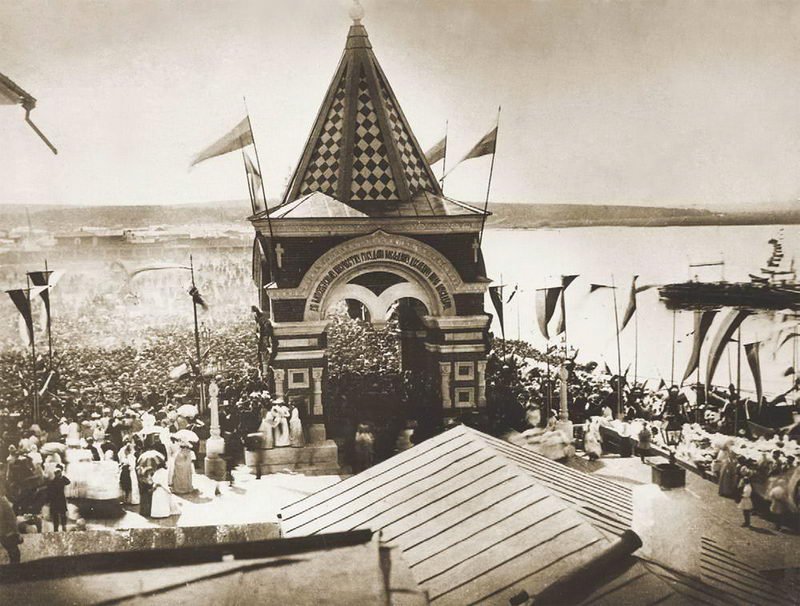 Under the peal of bells and loud cries of “hurray” the Mayor of the city V.P. Sukachev treated the Crown Prince with bread and salt, and the Archbishop of Irkutsk and Nerchin Veniamin and the clergy met him under the arch and accompanied him to the Kazansky Cathedral and for a short prayer service.

The next destination was a place reserved for the Crown Prince’s rest in the General Governor’s House (the so-called “Sibiriakovs’ House” or “White House” that is now located on 24 Gagarina Blvd.), where the future Tsar was delivered in an open carriage driven by the best three horses of the city. The representatives of the authorities and the public handed solemn gifts to the heir in that place.

This was followed by the visits to educational institutions: the Maiden Institute of Eastern Siberia (the building of ISU,  20 Gagarina Blvd.), the Educational House (the Eye Clinic of the Medical University, 20 Lenina Street), the Classical Gymnasium (Museum of Fine Arts, 5 Lenina Street), Industrial College (the building of ISU, 5 Sukhe-Batora Str.), and after a short rest in the house of the Archbishop Veniamin – to the Women’s Gymnasium (School No. 72, the corner of the Streets of Dekabrskikh Sobytiy and Rabochaya) and Kladischevskaya City School (Irkutsk History Museum, 16A Frank-Kamenetskogo Str.).

The day of June 24 (July 6) began with the passage through the streets of Bolshaya (Karl Marksa) and Laninskaya (Dekabrskikh Sobytiy), through the Uspenskaya Square (Dekabristov Square), along Kazachya Street and to the encampments, where a wappenshaw of the local garrison took place.

On his way back the Crown Prince Nikolai visited the Irkutsk Seminary where he was greeted by the enthusiastic students (Institute for the Development of Education of Irkutsk Oblast, 10A Krasnokazachya Street).

One of the most important events of this day was the solemn opening of the pontoon bridge across the Angara River (near the right bank of the Angara, next to the building of the All-Russian Society for the Preservation of Historical and Cultural Monuments – 2, Pyatoy Armii Street, - you can still see the traces of the bridge’s bank support), timed to the visit of His Majesty by the wise city Mayor V. P. Sukachev. The peal of bells and a cross procession marked the event.

After the heir to the throne had cut the ribbon and proceeded to the other bank, he headed to the Ascension Monastery (Voznesensky Monastery, 98 Polyarnaya Str.) through the new bridge over the Irkut River on the newly built road. 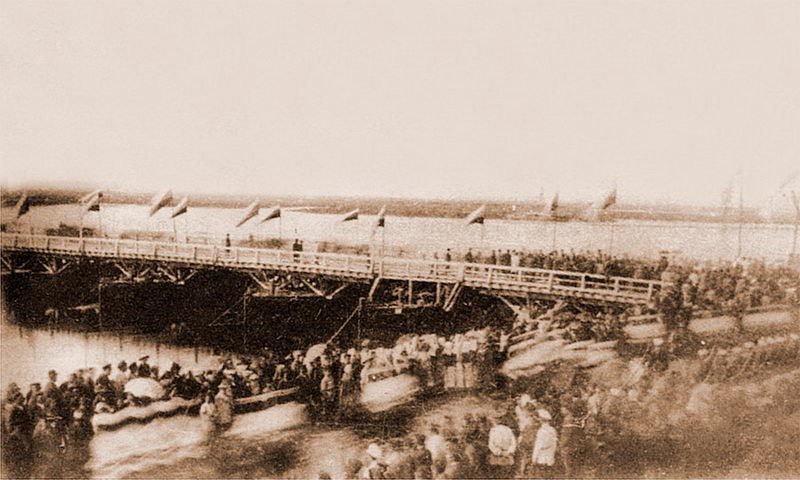 On his way back to the city Nikolai Aleksandrovich examined the gold-smelting laboratory, where gold miners treated him with bread and salt on an elegant gold platter (Scientific Research Institute of Precious and Rare Metals and Diamonds, 38 Gagarina Blvd.). The last point of acquaintance with the city was a visit to the Museum of the East Siberian Department of the Russian Geographical Society (Irkutsk Local History Museum, 2 Karla Marksa Street), where the staff showed the rarest collections to the heir.

This long day ended with a gala evening at the Public Assembly (the building of the Philharmonic Hall and the Theater of Young Spectators, 23 Lenina Street), after which the Crown Prince Nikolai left Irkutsk through the Triumphal Arch on the night of June 25 (July 7).

It is believed that the “royal arbor” was destroyed together with the Kazansky Cathedral. This assertion is followed by an almost detective story.

On July 31, 2014 Irkutsk greeted another honored guest - the Head of the Russian Imperial House Grand Princess Maria Vladimirovna Romanova who was also a grand-niece of the Emperor Nicholai II. It was she who laid the foundation of an architectural monument representing an unprocessed stone of almost a human height with the inscription “Revival of the Crown Prince’s Arch” during her visit. A year later the Princess was invited to cut the ribbon at the opening of the restored arch. But do not try to find neither the royal arbor nor the stepping stone on Nizhnyaya Naberezhnaya (Lower Embankment) nowadays. The stone mysteriously disappeared at the end of April 2015, and its current whereabouts is unknown to general public.