A Map of is a Monument to Him: Who Compiled the First Maps of Baikal

In which century Baikal appeared on the map of Russia, and who were the brave men that visited these wild lands for the first time, in order to study and understand the relief of the lake. We will tell you about the first “drawings” of the great Siberian Lake.

On the second Sunday of March, Russia celebrates the day of the employees of geodesy and map-making. It is no accident that the first spring month was chosen to celebrate this occupation that is important in any country. In March (new style) of 1720 Emperor Peter I signed the most important document called “The General Regulations” or “The Charter” which contained a special chapter “On Land Maps and State Drawings”. He was the one who initiated map-making in the Russian Empire.

A land surveyor and cartographer – this job appeared even before the advent of our era. Scientists say that people began to draw land maps even before writing appeared.

Without even noticing it, today we can no longer live without the results of the activities of the specialists measuring territories and calculating coordinates, creating maps and developing routes...

Baikal Was not Present on the Map of Great Tartaria

Take a look at the freely accessible engraving map of Great Tartaria published by Jan Jansson in the middle of the 17th century in Amsterdam. It will be impossible to find the usual outlines of Baikal against the background of real geographical names.

Many maps of XV - the first half of the XVI centuries can generally be described as fantastic, because, having no accurate information about distant lands, the authors had to fill the maps with truly fantastic inventions.

But when the active colonization of Siberia started, the situation underwent a 180-degree turn.

The government regularly received information about Baikal from explorers, and, according to the opinion of a number of researchers, scientific expeditions first reached the lake in the 1620s.

Earlier, a geographical map in Russia was designated by the term “drawing”. This is a way to depict the Earth’s surface, in our case, the Baikal region, its lakes, rivers, inhabited settlements, roads...

Kurbat Ivanov and His “Drawing of Baikal”

In early1640s, Cossack military commander Kurbat Ivanov received an instruction from the Yakut governor Peter Golovin: “... to make the drawings from the Ust-Kut River and to the Lena peaks, and Baikal, and the rivers falling in them...” By this time, he had already provided the governor with a drawing of the banks of the upper reaches of the Lena River, with arable lands designated on it. Without any doubt, namely, these drawings preserved the name of Kurbat Ivanov for posterity.

A detachment led by Ivanov went to Baikal. Coming on its western coast, the expedition members began to construct boats, in order to get to Olkhon.

Having completed the survey of the territory, Ivanov returned to the Verkholensky prison, made his famous “Drawing of Lake Baikal and Rivers Falling to It and Lands around It, Answers of Tunguses and Our Other Friendly People to the Questions about Mongols and the Chinese State and Other Lands on Lake Baikal Where a Prison Can Be Built”.

Sending this drawing to Yakutsk, to P.P. Golovin, Kurbat wrote a report in which he described Baikal abundance, telling about the lake’s fish, commercial fur-bearing animals, and flora. Presumably, the obtained data made the Russian government assess the potential of Baikal in a new way.

Unfortunately, the map made by Ivanov has not been preserved until now.

It should be noted right away that a map-maker, geographer, historian, architect Semyon Ulyanovich Remezov has never been in Irkutsk and on Baikal. However, the works of predecessors, texts of manuscripts on geography, information obtained from those who know, notes of explorers enabled him to carry out an incredible amount of work of highest quality for that time. 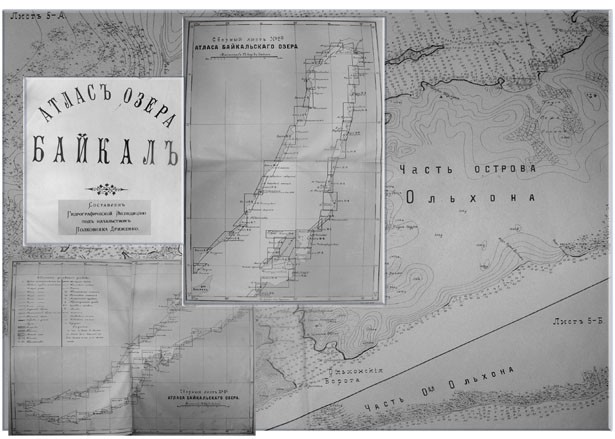 In 1701, the first Russian geographical atlas of Siberia was completed: it contained the most objective data about this distant and mysterious land. The atlas included 23 maps; the 18th of them depicted Irkutsk and surrounding territories, including Baikal.

The drawing depicted Irkutsk as the largest settlement of the district, standing on the right bank of the Angara River, opposite to the mouth of the Irkut River. A wooden fortress of a prison with towers, a house of the military governor, houses of the residents of the city were drawn in great detail... The Savior Church stood in the center of the fortress.  Znamensky Monastery and monastic settlement were situated near the city.

The villages of Razvodnaya, Panova, Uksusova, Shchukina, Nikolskaya were marked on the way towards Baikal.

The outlines of the lake were drawn in accordance with the words of eyewitnesses. And although they definitely diverge from modern contours, that was the most accurate sketch for that level of knowledge.

Of course, this drawing of “Irkutsk” does not fit into modern rules and frames in any way: there is no grid and instrumental measurements, the length of the way between points is indicated in the days of travel, the map is oriented not to the north, but to the south. However, at the same time, the symbol list, a lot of data bout economy - plowed and nomadic places, hay lands, wintering places of fur and fish hunters, sable hunting fields, mills - both private and public...

Daniel Gottlieb Messerschmidt and the First Map of Baikal

Gleb Yurievich Vereshchagin, a universally recognized authority in the field of research of Baikal, wrote that the first map of Lake Baikal that, unfortunately, was not published, was compiled by Daniel Messerschmidt in Siberia during his 10-year journey.

The first experience of the scientific study of Baikal was undertaken at the time of Peter I who realized the need to consolidate the vast Russian possessions in Siberia and the need to use their natural resources. As a result, he organized scientific expeditions to the lake, these traditions were adopted by other rulers of the 18th century as well.

It was Messershmidt who received a personal order from Peter the Great and was the first to come to Baikal for scientific purposes. He actually spent only a few months in Irkutsk. The city was just a “transit point”. The task was to visit the coast of the lake, first of all, southern and eastern parts, to explore the river basins, the prisons on the coast.

He spent the years 1724 - 1725 traveling around the lake and nearby lands, visited Dauria. In March 1724, the explorer followed the sleigh road along Baikal and reached the mouth of the Selenga River, paying his attention to the Khamar-Daban Ridge. In 1725 he traveled along the route Irkutsk – Baikal – mouth of the Selenga River – Udinsk (Ulan-Ude) and further, to Transbaikalia.

Observations and measurements performed by him made it possible to conclude that there is a discrepancy between the drawings of Ob, Angara, Nizhny Tunguska on the existing maps of that time.

A great achievement of D.G. Messerschmidt, of course, was the fact that he created the first map of Baikal with thorough comments related both to the lake itself and to its surroundings.

Of course, later maps were made by Aleksei Pushkarev, Ivan Chersky, Fyodor Drizhenko, and many others; thanks to their incredible perseverance and knowledge, we use modern maps of the Great Lake. But that is already a completely different story...