Decembrists in Siberia: from Political Criminals to Educators

© Фото: http://depositphotos.com/
Siberia is a large part of the Russian map associated with difficult natural and human environment. And while the phrase by Mikhail Lomonosov, saying that "the power of the Russian Siberia will grow" is afloat and popular, the severe region is still perceived through the prism of exiles, hard labor, prisons ...
Первый Байкальский

The first exiled people came to Siberia at the beginning of the 17th century - with the beginning of the reign of the Romanov Dynasty. The Government calculated everything accurately: the easiest way was to send unreliable citizens far away from the capitals. Wild, remote, icy Siberia became a place of eternal exile and rest of many hundreds of thousands of people “disloyal” to the government.

And the transportation of chained convicts through the huge country began: these included peasants, soldiers, officials caught stealing, embezzlers of public funds and smaller thieves, disloyal people of all kinds. The government pursued several objectives. On the one hand, it removed criminals from central part of the country, and, on the other hand, inhabited the lands. It was a cynically cheap and accessible way.

But the main prisoners community consisted primarily of the political exiled.

By the way, one of the first political exiled was …a bell. On May 15, 1591 Tsarevich Dmitry was murdered in Uglich. A riot started, but it was quelled. The surviving rebels were exiled to Siberia. And the bell that beat the alarm, summoning the people to riot, came alongside with them. The bell’s canon was cut off; and a shameful inscription was made on the bell: “this bell that beat the alarm at the time of the murder of Tsarevich Dmitry was exiled from the city of Uglich to Siberia in 1593 ...”

Irkutsk wasn’t able to avoid the fate of other Siberian cities – it became one of the centers of exile.

An interesting Siberian fact. Already in the 19th century peasants who were building houses did not forget to leave an outlet in the wall looking to the North, the outlet was popularly called “Tramp’s Window”. These outlets were usually used by people to leave tobacco or dry bread for runaway convicts. 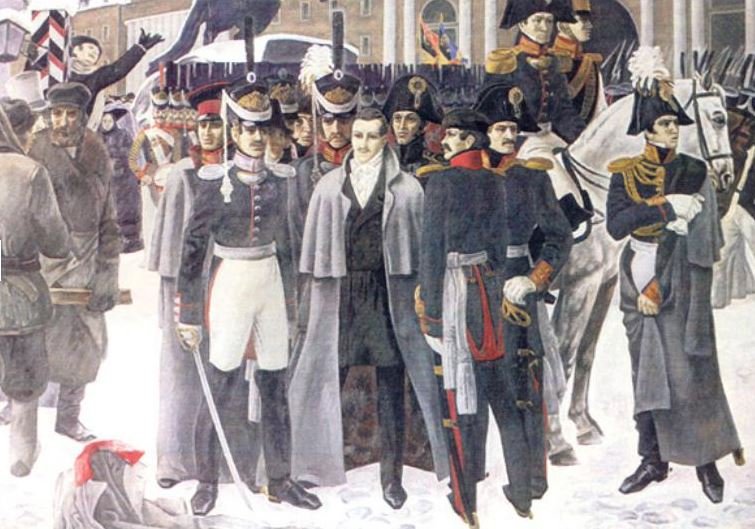 At the beginning of the 19th century Siberia received the main political exiled in Russian history - the Decembrists. The first fourteen of the Decembrists were sent to exile in Irkutsk on the nights of July 21 and 23, 1826. It took them 37 days to get to Irkutsk from the Petropavlovskaya Fortress of St. Petersburg. At that, they had to go almost all the way without removing the fetters.

Their arrival was kept in the strictest confidence. However, people in Irkutsk were to meet the Decembrists prepared in advance, and this means not only the city authorities. The arrival of the “political” convicts was disclosed by the representatives of the Tomsk branch of the Masonic Lodge which existed in Irkutsk. That is why the Irkutsk masons impatiently waited for the first batch of the exiled and did everything to make it so that a decent crowd met them at the Moskovskie Gates upon their arrival. Despite the strict prohibition and secrecy, the residents of Irkutsk came to look at the participants of the riot on the Senatskaya Square.

The first meetings of the residents of Irkutsk with the Decembrists were brief: almost immediately the state prisoners were deported farther, for hard labor in exile. Some of them were sent to the salt-making plant in Usolye-Sibirskoye, a part of them - to the Aleksandorvsky and Nikolaevsky wine distilleries.

Siberians treated the Decembrists with certain affection. The well-known fact is that E. Obolensky and A. Yakubovich sent to Usolye were hired as woodcutters, instead of hard work in workshops where the salt was boiled.

However, this relief quickly ended. By the Emperor’s order the Deputy Governor-General of Eastern Siberia N. Gorlov was brought to trial for allowing a relief to state prisoners, and the Decembrists were transferred to Nerchinskaya hard labor prison in October 1826. No one already helped them here. Noblemen and the intellectual elite had to work at the Blagodatsky mine under harsh conditions.

And only when the first Decembrists’ wives arrived in Nerchinsk - E. Trubetskaya and M.Volkonskaya  - the political exiled began to receive official relief measures. The heroic deed of the Decembrists’ wives was praised by Nikolai Nekrasov in his poem “Russian Women”.

At the penal settlement 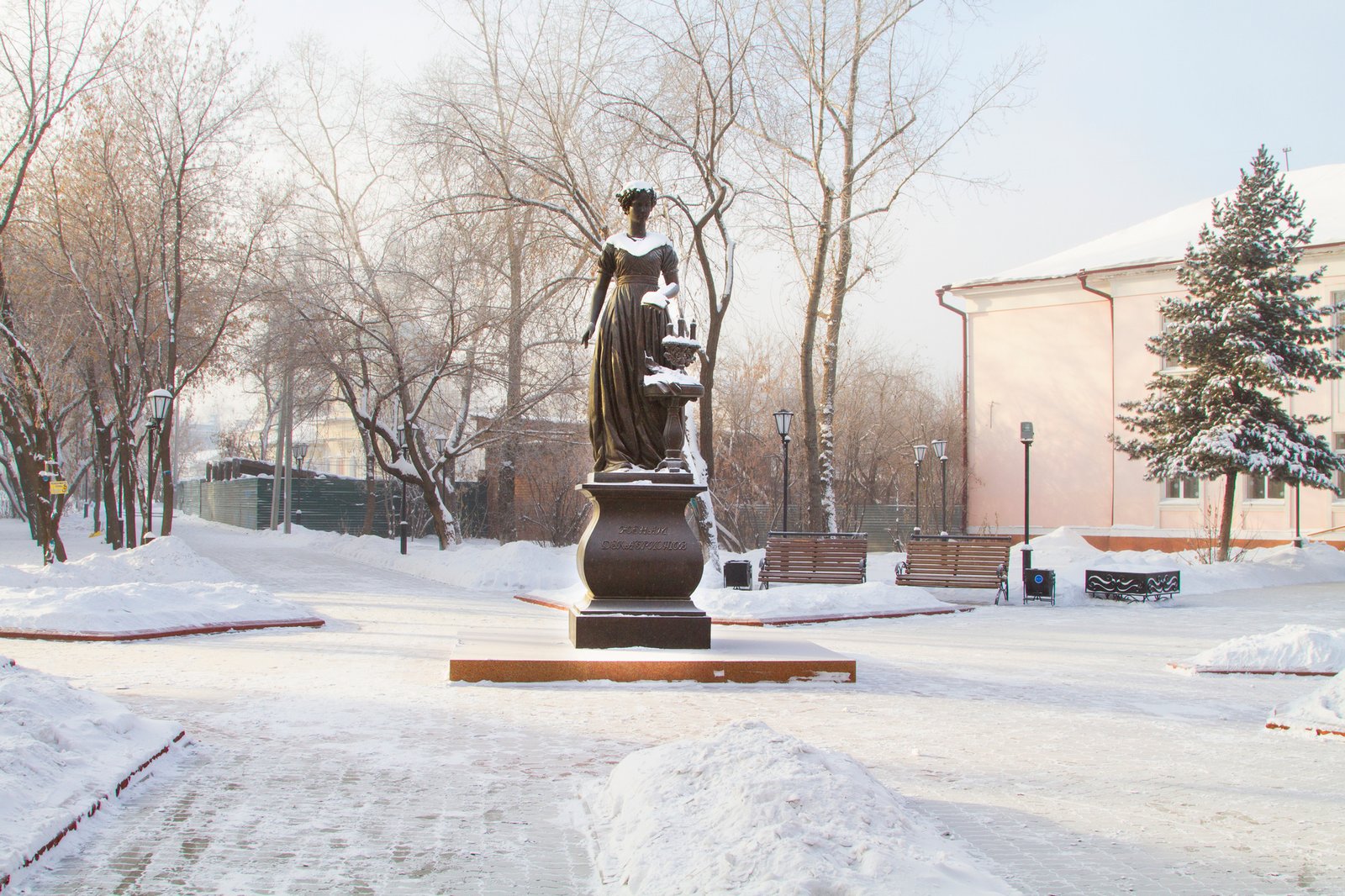 When the hard labor prison changed to a penal settlement for Decembrists, they began to contact with the residents of Irkutsk closer. At that, the life in the settlement was determined by numerous instructions. Its residents were forbidden to leave the settlement without a permission of superiors further than to a distance of 30 versts (32 km). All correspondence with relatives had to pass through the Office of the Governor-General. Occupation with crafts was strictly regulated by the State, so that the Decembrists didn’t gain financial independence. With rare exception, the Decembrists were forbidden to work in public service, as well as to engage in socially-relevant activities, e.g., pedagogy. That did not prevent many of the exiled from teaching literacy to the local population and the authorities from turning a blind eye to them.

Many Decembrists in exile gathered materials on the history of Siberia, studied people’s everyday life. Even a small hospital was built in Chita at the expense of the Decembrists’ wives; it was used not only by the exiled, but also by local residents.

The majority of Decembrists shared the opinion of Lunin who wrote the following in one of his articles: “our real earthly field of work began with our entry to Siberia, where we are called to serve the business we dedicated ourselves to in word and in deed”.

The Irkutsk Decembrist colony was one of the biggest. Those who were sent to Irkutsk included: Lunin, Volkonsky, Trubetskoy Mukhanov, Podzhio, Annenkov, Volf, Yushnevsky, Yakubovich, Raevsky, Shteingel and others. However, until 1845 the most part of them visited capital city of Irkutsk province only occasionally, having settled in suburban villages.

The first real Decembrist residing in Irkutsk was Muravyov. He was sentenced to exile in Siberia without deprivation of his ranks and nobility, he was first appointed a Governor of the town of Verkhneudinsk and transferred to Irkutsk in 1828. The city center was reconstructed under the leadership of Muravyov: plank pavements were laid, public festivities in carriages began to be held on the embankment of Angara. The police led by the exiled Governor managed to maintain order in the city so well that it was praised in gendarmes’ reports many times. The house of the Decembrist Muravyov on the Spasskaya Square became one of the centers of cultural life of Irkutsk. Musical and poetry events, lectures, creative meetings were held here.

The Decembrist Raevsky not only opened a school for children and adults in the village of Olonki, but invited a teacher and ordered teaching aids at his own expense, offered to use his house in Tikhvinsky Parish of Irkutsk for holding classes for the girls from the Orphanage of Medvednikova.

In 1836, following the idea of the Governor General Bronevskoy, medical practice was permitted to Volf  “in view of the shortage of health officials in the province”. The trust to the exiled doctor was so great that even influential residents of Irkutsk - rich merchants, civil servants and even the Governor - used his services. Muravyov also provided medical assistance to those who needed it: the former Hussar Colonel turned out to be a “successful tooth-drawer”. At the same time Maria Volkonskaya and Ekaterina Trubetskaya received medications for giving them out to sick villagers almost with each parcel.

“State criminals” also had a big influence on the development of culture in Siberia. Precisely with the arrival of these highly educated people the Siberian youth started to have “a thirst for studying” and “aspiration to universities”. Reading became popular, as well as subscribing to newspapers and magazines, arranging literary and musical events, going to theater. Performances was rehearsed and staged in the house of Volkonskys. When a theater was opened in Irkutsk, its permanent audience included the families of Trubetskoys and Volkonskys. 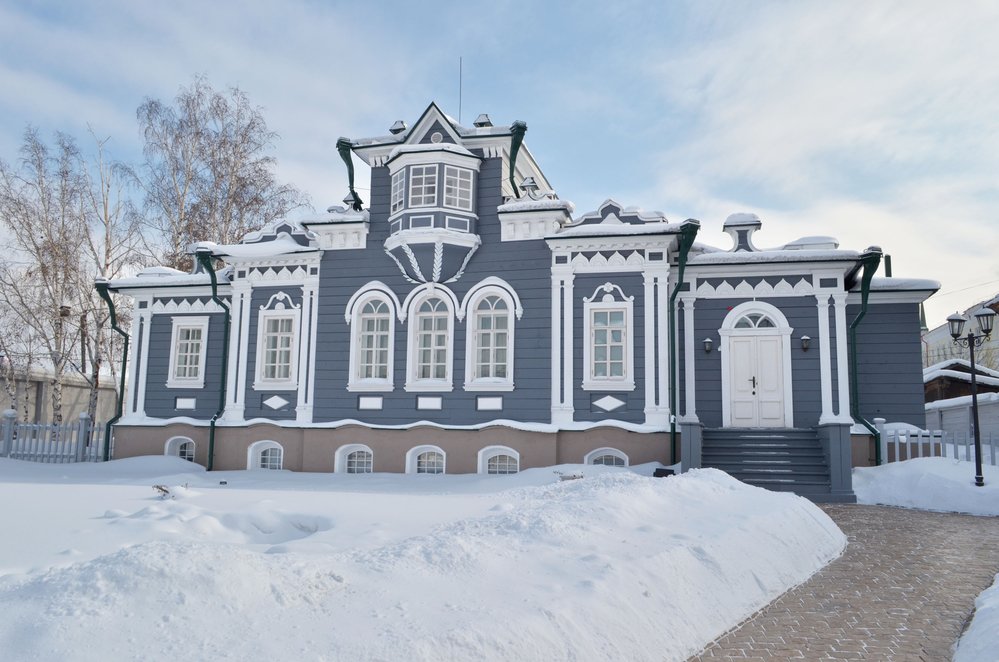 Today the houses of Trubetskoys and Volkonskys are the operating museums, with the expositions telling not only about the life of the Decembrists, but about their contribution to the cultural life of Irkutsk. One of the disciples of the Decembrists, the wonderful doctor and journalist N. Belogolovy wrote: “Winter life in the house of Volkonskys was noisy and open, and being there was an honor for anyone belonging to the Irkutsk society”.

Political exile with Irkutsk as one of its centers played a huge positive role in the life of Siberians. The Decembrists were highly educated, cultured people, famous not only in Russia, but also in Europe. They brought not so much culture and science, as the intelligent an enlightened view of the world and society to Siberians in general and to the residents of Irkutsk in particular.

The Decembrists could not but began to feel at home in the forced new homeland over the thirty years of the Siberian exile. Leaving the place, many of them bowed their thanks to Siberia “in gratitude for its bread and salt and hospitality”.

The Tsar’s forgiveness caused mixed feelings on the part of the Decembrists: on the one hand, they wanted to return, and, on the other hand, their everyday routine that had been well organized over the thirty years of life there gave them more confidence and reliability than the capital uncertainty. In addition, the Decembrists who had become elderly by that time, resented the mistrust of Alexander II who put the former exiled under the supervision of police.

Alexander II took care about the dramatic presentation of his “mercy” – the delivery of the Statement on Amnesty to Irkutsk was commissioned to the Decembrist’s son Mikhail Volkonsky. At the same time, he made it clear that the Decembrists still remained criminals in the eyes of the authorities. And the mercy was shown only when they got old.

One way or another, the residents of Irkutsk remained thankful to the Decembrists and the contribution made by them to the public life of Siberia.