Gold has been attracting people since ancient times. Quick and easy enrichment at the expense of this precious metal has always led people to the farthest regions of the world, such as Alaska, South Africa, Australia, and Siberia. The coast of Lake Baikal had its own deposits of gold. The works on them had been conducted for more than a hundred years from the mid-nineteenth century until 1960-s.

At some of the mines you could obtain metals only with a tray and a shovel in your hands. Even nowadays you can try the easiest way of flushing gold at a creek at the Chernaya Gorge (16 km from away Listvyanka and 1 km away from the village of Bolshie Koty). This was typically done by small gold miners. They dug the gold near a creek and flushed the obtained gold in it. For manual flushing of gold immediately after its digging used a tray. They let the water run through the tray and flushed the gold-containing sand by placing the tray in various oblique positions. 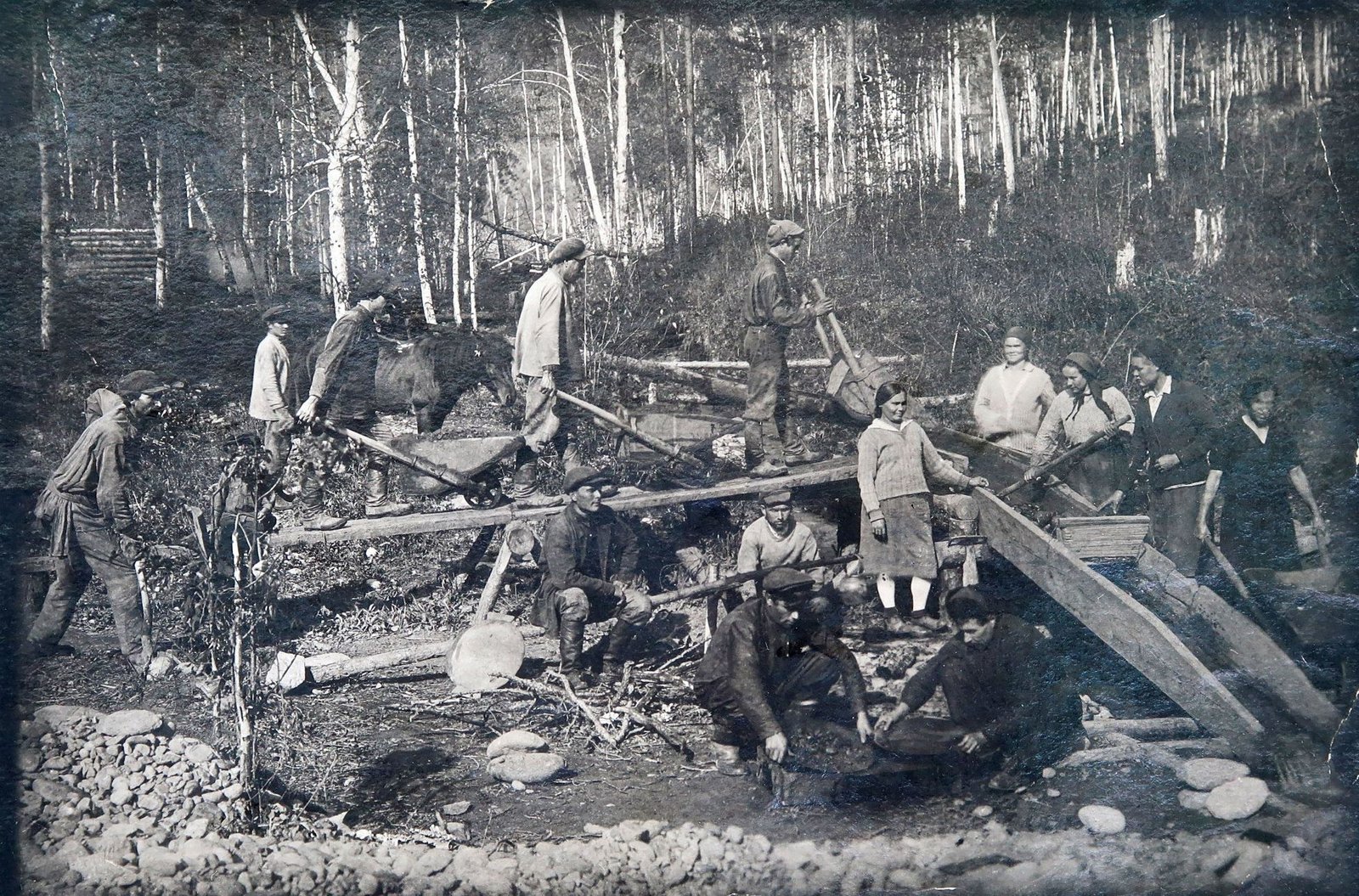 It should be noted that the work by a tray and a shovel is not easy at all. Mountain creeks are swift and vigorous, the water temperature there is very low. Without a habit you may instantly get tired and cold. The initial fervor passes quickly, and the result is simply disappointing. You could have shoveled a large amount soil and find no grain of gold. Although, as the workers of a tourist centre located nearby tell that some tourists are lucky, and with a great desire you can obtain even a pinch of gold. However, then you’ll have to work from morning till evening, that is not what everyone will resolve to do.

In general, all the major gold mining locations on Lake Baikal  are concentrated near the village of Bolshie Koty. These are five gorges (valleys): the above-mentioned Chernaya Gorge, Bolshie and Malye Koty, as well as and Bolshaya and Malaya Sennaya. You can still find the traces of gold mining works at each of them.

The miners had to dig underground horizontal tunnels – cross drifts in the place of some deposits. These were not mines, but rather long earthen caves, however the principle of their operation was about the same. They were strengthened: boards and a ceiling were made. Gradually a cross drift developeed into a system of corridors and galleries. The gold diggers pickaxed gold-bearing rocks within the drift way, just like in an earthen burrow. The gold obtained by them was loaded into two-wheeled carriages and taken away by special people – car men. When a cross drift ran out of gold, the construction was quickly dismantled and another place was being searched. You could not just pull out the support in any cross drift, you needed an exceptional agility to avoid an avalanche.

Underground workd were considered to be the most difficult, not everyone resolved to engage in them. In addition to the heavy working conditions when the lack of oxygen caused hallucinations, landslides were frequent... Therefore, superstitions were widespread among the gold miners: they were forbidden to whistle and use bad language during their work. Convicts often worked in cross drifts.

Digging gold in taiga underground often caused terrible situations. Once convicts were digging a deep hole and went really deep, but the edges were poorly reinforced. So the land crumbled and blocked them up. About 30 people died. Their surviving companions established a large cross on the place of the tragedy. Then rumors began. People were telling that convicts had been screaming from under the ground for several days, even the voices of the unfortunate were heard; yet everyone was afraid to approach them. Since then nobody has been looking for gold in that place, even though they knew that there was lot of the metal there.

Gold miners had an unwritten law: not to develop the collapsed cross drifts or mines that buried people under their vaults any more. When miners stumbled on the corpses blocked up by land, they immediately stopped doing anything and left the place of development. Disturbing the dead was considered the greatest sin.

Gold at a high price

Another method of gold mining is directing the currents of mountain rivers to the determined area in order to make the quickly flowing water wash away the definitely empty layers of land. Judging by the large number of channels and ditches in Chernaya Gorge, this method has been applied here repeatedly. Building dams, digging cross drifts and other kinds of interference into the ecosystem of the valleys have led to noticeable environmental problems on the western coast of Lake Baikal.

In Soviet times gold was extracted with the use of special technological devices and under strict state control. Approximately in 1930-s several wooden dredges were brought to Bolshie Koty. The remains of one of them can be found even today, several kilometers away from the coast of Lake Baikal, behind the village. These remains, as well as all gold deposits, were explored by a former employee by the Irkutsk Research Institute of Precious and Rare Metals and Diamonds called Rudolf Kavchik not so long ago. In his opinion, the digging depth of the dredge amounted about 7 meters. It was moved along the river with the use of manual winches. Already on the coat of Lake Baikal he found less noticeable metal constructions which probably represented the second dredge that was extracting gold in the coastal zone of the Lake. These remains are a silent testimony of a consumer’s attitude to nature both during the times of the Russian Empire and in Soviet times.

In winter gold was extracted from the ice of Baikal with the use of a large scoop on a long handle. Lanes of water were hollowed in an ice field, and gold was scooped from the bottom. The water was heated on the fire, and the gold was immediately flushed on the ice at the gateway. Despite the difficult working conditions, mortality rate at these mines was much lower than before. If before the revolution the miners had semi-enslaving relationships with the owners of the mines, now they had the technology, the best procurement, and the rights. Thanks to their labor, gold miners could dress up and eat no worse than the leaders of the Communist party and residents of the capital. In Tsarist times diggers also earned quite a lot, still, there were no guarantee that you would come back home with your earnings. However, the value neither of man nor of nature, but only that of gold remained constant, which led to some victims.

Gold mining on Baikal stopped in 1968, but as it was said above, a lucky tourist can still find a bit of the Baikal gold for himself/herself.

In order to see the way the places of gold mining on Lake Baikal look now and what is left of this once vast industry, watch the video prepared by “Baikal Sketches”: