A Buryat Wedding on the Coast of Lake Baikal

A Buryat wedding that can still be seen on the coast of Lake Baikal is not just a unique rite, but almost a sacred event involving betrothment, matchmaking and a wedding train...

The exhibition hall and collections of the Irkutsk Regional Museum of Local History (History Department) contain a wealth of materials: Buryat everyday life items, including ceremonial women’s clothing worn for solemn occasions, such as, for example, wedding festivities.

The indigenous inhabitants of Baikal region - the Buryats - carefully preserve their diverse and extremely original cultural heritage, primarily associated with their incredible respect for the values ​​of the family hearth and traditions of ancestors. Therefore, marriage, expansion and enlargement of the family were the greatest events in the lives of ordinary Buryat families.

Wedding rites of the Buryats are a complex of unique, sequential actions that have been developed during centuries and are based on the national perception of this people: their traditions were passed from generation to generation. The wedding ceremony included three main stages: pre-wedding, wedding itself and post-wedding. 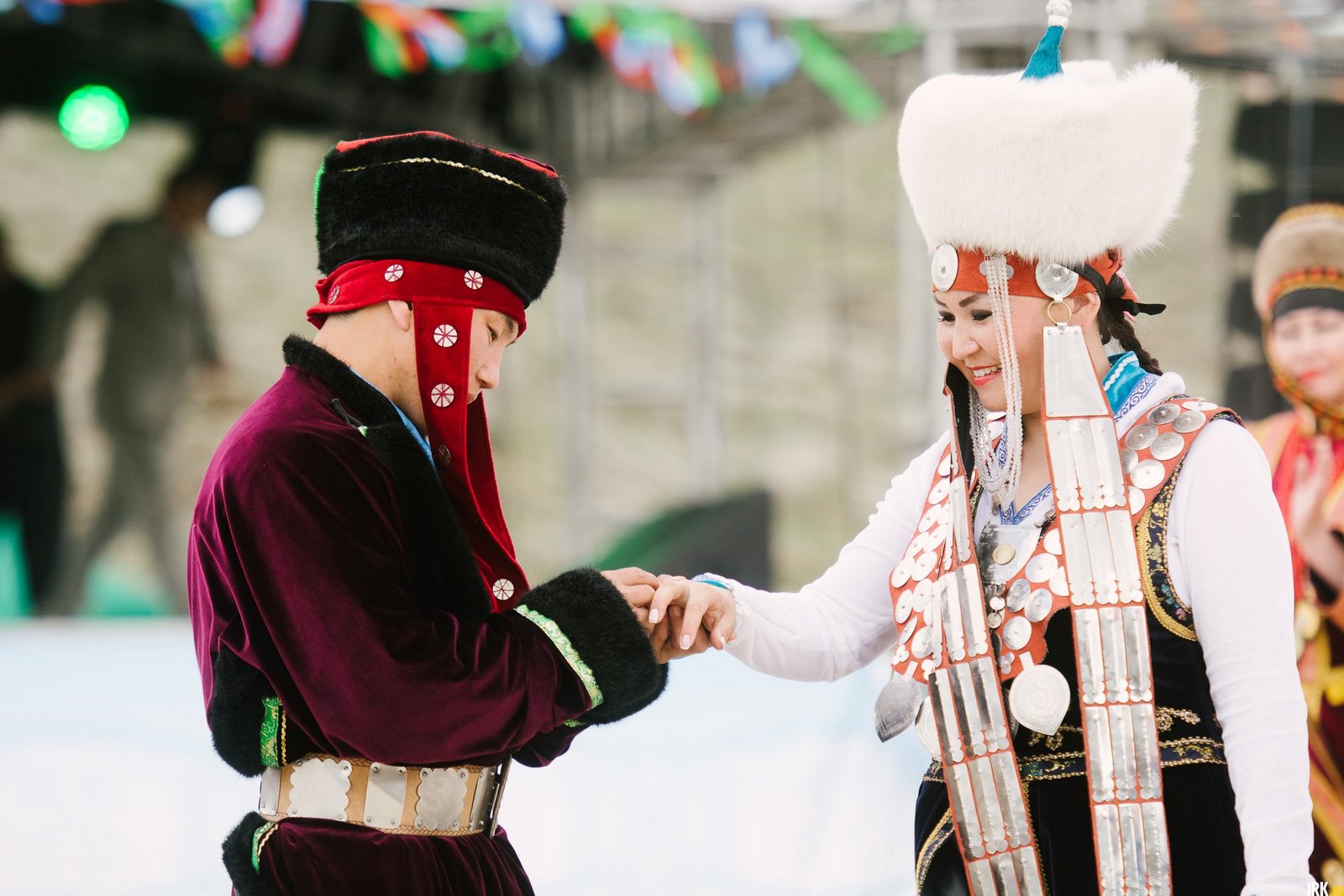 Betrothment is actually the beginning of matchmaking, a kind of agreement between the parents of the bride and bridegroom concluded for establishing kindred relationship. Pretty often berothment was conducted only between the fathers of the future young spouses.

As a general rule, the father of the bridegroom with his closest male relatives came to hold the matchmaking ceremony. But this did not mean that participation of women in the ceremony was strictly prohibited. Such a marriage contract was perceived by the parties as an indissoluble legal act supported by the exchange of belts or khadags (khadag was the most precious universal gift, a long narrow scarf that was presented as a sign of reverence, friendship and goodwill). And if for some reason the matchmaking did not result in the wedding , the initiator of the contract breach had to compensate for the moral harm with a fine.

Determining the Date of the Wedding

It was important to choose the “appropriate” wedding day. Therefore, there was a tradition for arranging the event during new moon or full moon, which, of course, was not accidental. There was a belief that if marriage was agreed within the period of the “mature moon”, then the life of the couple would be peaceful and comfortable.

Entertainment of the Bride’s Family to the Bridegroom’s Family

A fire was built in the open area: next to it people laid out the products brought by the bridegroom’s relatives: meat and “tarasun” (milk vodka). Some of the local inhabitants (usually it was a respected old man) conducted a rite of sacrifice to the patron spirits of this land: the offerings consisted of meat and vodka. Thus, the bridegroom demonstrated respect for the ongons (ongon is a spirit of the ancestors of the clan or family) of the bride’s family, asking them to protect him, include him into the number of members of the new clan, and help him with the future prosperity of his family.

Departure of the Wedding Train

The bridegroom’s representatives were waiting to meet the wedding procession near the ulus (inhabited settlement) where the future husband lived. They brought dairy products, snacks, “tarasun” milk vodka with them, and now it was the turn of the bride’s relatives to worship local deities.

An indispensable element of this acquaintance was a competition of young men from both sides, where a specially prepared ceremonial ram’s head was at stake. The “team” of the bridegroom was supposed to win in this friendly fight. There was a belief that in case of a different outcome the bride would not be loved in the new family.

The critical role in the wedding procession was played by the figure of the so-called “turushin”, a man who acted as if he led the wedding train. He was holding an arrow with an iron tip solemnly decorated with bright pieces of fabric and silk tassels. This arrow served to drive away evil forces, thereby ensuring the trouble-free way of the bride to the place of her new residence, protecting her and the happiness of her future family. And when the turushin dismounted, having arrived in front of the yurt, he immediately had to go inside and shoot an arrow to the north-west pillar of the dwelling and hit the target with the first shot.

Very serious requirements were imposed on the person who took on the duties of a turushin: he had to come from a prosperous family with a large number of children, have an excellent knowledge of customs, possess diplomacy, ingenuity, “sharp language”, physical strength. Indeed, he was actually the “frontman” of his own family.

Participants of the wedding train in the courtyard of the bridegroom were greeted with a national “Yokhor” dance, and after that, they were invited to the yurts according to their age: there they were first of all served sacred dairy products.

According to the tradition, the bride had to have her own room. And if the family had no the opportunity to provide a separate house, then they simply hung a curtain, fencing off a private space for the young woman.

In order to pass one of the most solemn rites in the bride’s life, the young woman had to change her appearance to confirm that she had already received the status of a married woman. Therefore, the procedure of dressing (if the bride did not already arrive in a wedding costume) and grooming the bride’s hair is symbolic; this solemn ceremony could only be held by female relatives of the bridegroom who had happy large families with many children.

The maiden braid was undone, then women made many small braids of the bride’s hair: there were usually nine braids to the right and eight to the left; their tips were decorated with coral beads and gold and silver coins. Such hairstyle was proper for a young woman during the main wedding ceremony. 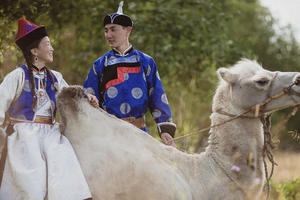 The wedding costume (later it became the outfit of a married woman) was supplemented with various neck and chest decorations.

The expression of respect for the patron spirits, deities of the bridegroom’s family, elders, bridegroom’s parents, as well as their birthplace, actually meant the acceptance of the bride to a new family community.

The procedure of the rite held in the yurt of the father-in-law (bridegroom’s father) is interesting: the bride had to be the first to enter the yurt, because a bad spirit could slip before any other guest and do harm to the newlyweds.

The process of worship was finished by offering gifts to the bride; the bridegroom’s father was the first to present the gift. The most common offerings were money, coins made of precious metals, rings, bracelets, scarves...

After the rite of worship, where the girl actually agreed to submit to the new family and honestly perform all the duties of the daughter-in-law; then the marriage was considered “registered”.

When the guests of the young wife were going to return home, they were given presents: scarves for women, shirts for men.