A Story about the Way How Bicycles Appeared in Irkutsk

We’ll tell you an interesting story about the way how the pre-revolutionary Irkutsk became the centre of cycling of Siberia, as well as about the possibilities of the modern unique “extreme sport” of the Baikal roads.

The first bicycles and, accordingly, cyclists appeared in Irkutsk in the early 90s of XIX century, in 1891 - 1892. 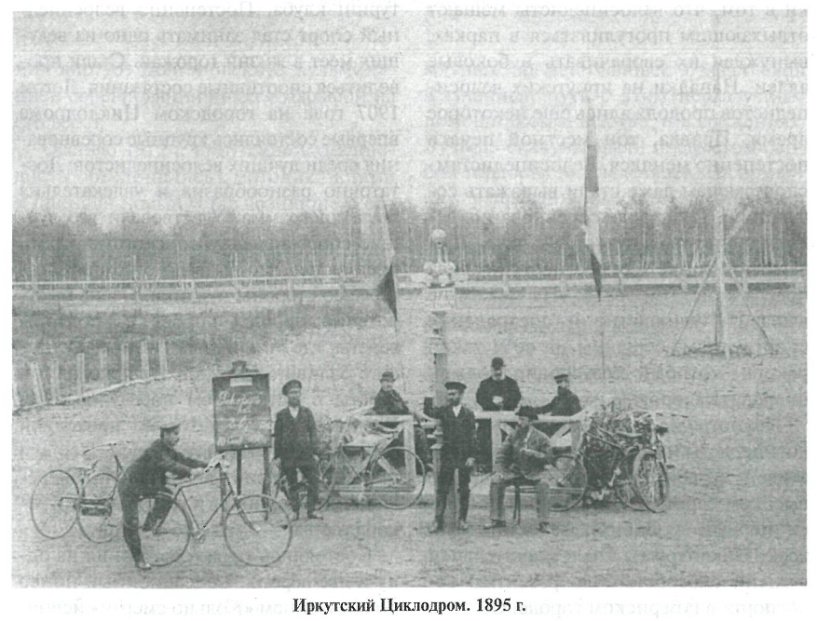 At that time buying a bicycle meant purchasing a “luxury” item, since its price ranged from 250 to 400 roubles in the second half of the century (for comparison: the average salary of a worker made up about 20 roubles per month, the price of a piano was about 200 roubles, the price of a horse for a cart - about 100 roubles).

According to various sources, it is possible to figuratively conceive the increase in the number of bicycles in the city. It is believed that there were only 2-3 of them in 1891, but this means of transport was used for riding along the streets only by A.I. Shumikhin who is called the organizer of cycling as a kind of sport in the city by a number of sources. Others pass the “palm tree” in this sphere to the well-known merchant N.V. Yakovlev, the owner of the first weapons shop in the city and the owner of the first car.

A year later, there were already about 15 bike owners in the city by the beginning of the bicycle season. And they demonstrated their novelties to the citizens, arranging collective rides.

The excitement caused in the city by this innovation was supported by the owners of the bicycles who considered it an obligatory ritual to get to the city centre with their treasure and proceed to a photographer’s parlour to capture such a significant event in their lives.

However, some did not react to this novelty in a positive way. Do not forget that the main means of transport in Irkutsk was “horsepower” at that time, but not the one that is counted as the number of “horses” under the hood of modern cars today, but real horse-drawn carriages. So the irritation of a number of townspeople was caused by the fact that cyclists ... frightened the horses, and occasionally collided with them. The drivers outraged, wrote complaints to the police, and as a result, in order to avoid misunderstandings, the police chief simply introduced a ban on riding bicycles around the city.

The sportspersons urgently needed to find the way out, and it was found when they decided to unite and create a community of amateur cyclists. It was necessary to change the negative attitude to cycling, to promote its advantages for the members of the Irkutsk city society. According to various sources, there were as many as 34 bicycles in Irkutsk by the time of the meeting (October 1892 is the approximate date). It is appropriate to recall that the city’s population reached about 50 thousand people shortly before the laying of the Trans-Siberian Railway (1898). The head of the society was called the commander, and one of the creators of the community A.I. Shumikhin was elected to the position.

The only thing left was to solve the main problem:  the possibility of cycling through the city streets. The existing rules, according to which a cyclist encountering a frightened horse should get off the bike, did not suit everyone, since the same rules forbade the bicyclists to move along the main streets of the city, opposite the steamship wharves, at all market squares, as well as on bridges. However, gradually the amateur cyclists gained the sympathies of the city residents, since it became traditional to hold cycling competitions with the demonstration of circus numbers. Then the city authorities allocated 13 dessiatines (2.7 acres each) of land in the most beautiful place, a birch grove on the outskirts of Glazkovo (Kaiskaya Grove), to the community of cyclists.A sports ground with a bicycle track was opened in Irkutsk on May 30, 1893, in fact, it was an entire whole sports town including  running tracks, a giant stride for children, croquet, skittles, and even children’s bicycles.

Due to the fact that by the time of opening the tracks were ready, it was quite natural that the opening program included cycling races. The city authorities and the public formulated the purpose of creating such an object for themselves quite simply: to promote the development of youth’s interest in sport. But the cycling ground was opened in a traditional way – by a prayer service followed by the entertainment itself. The Mayor of the city V.P. Sukachev celebrated the event together with the crowd. The members of the community of amateur cyclists had something to be proud of. At the time of the opening of the cycling ground the community included about a hundred people: the owners of bicycles of such famous brands as “Dux”, “Safati”, “Rudge” and “Coventry”.

Pretty soon the cycling ground, being in fact the only construction of this kind is Siberia, became the favorite venue of festivals held in Irkutsk.

For example, it is known, that in 1894 the city firemen with a banner went to the cycling ground, where the festivities and entertainment of the lower ranks took place.

The cycling ground has started to host sports races from 1895: the winner was awarded the title “The Best Rider of Irkutsk” and handed a golden badge.

In addition to this, a summer theatre was built, concerts were held there in the summer of 1896, and two months before the coronation of Nikolai II (May 14 (27), 1896) the two cyclists Alfimov and Raspopin left the cycling ground to get in time for this solemn event.

Beginning from 1900 women found courage to participate in cycling competitions as well. Two sisters on male bicycles and in men’s suits took part in the competition at a distance of 1500 meters. According to the mass media reports, the winner was the elder sister - M.I. Petrazhevskaya who was awarded with a golden badge: “For the First Women’s Race."

At that time bicycle that was the main means of transportation promoting the development of tourism in the city, for it gave people an opportunity to explore the surroundings of Irkutsk with sufficient mobility.

However, after the revolution and the Civil War, the popularity of cycling in the city decreased, but this is another story to be told.