Big Trails for the Big Lake

We talked with Roman Mikhailov, the head of the development department of the Big Baikal Trail, about what trails lake need today and how the organization has changed over the past 15 years.

We arrived in Bolshiye Koty early in the morning. The coast of Baikal was empty. A large wooden house with white triangular frames on the windows – a biologists’ station - could be seen behind the quay. It was surrounded by the roofs of gray slate and brilliant metal on the left and on the right. Farther away, the cold Baikal wind tousled the crowns of the endless forest.

We changed clothes in an empty biologists’ house and headed off to the dirt road. The road narrowed after the dusty transformer surrounded by a frail wooden picket fence with threatening yellow signs; then it became a trail and went deep into the forest.

The trail went along the coast, descending and ascending in smooth hills. Sometimes it turned into a bare cliff sinking in the brilliant Baikal. After 5 hours of a long serpentine road, the forest ended, and we finally descended to Listvyanka. This is a part of Baikal that can be seen along the most popular trail “Bolshiye Koty – Listvyanka”.

In their books, they often pondered about a single trail that would go along the entire Baikal coast in a ring.

“Now we have no such infrastructure on Baikal that would allow a simple tourist to safely go around the entire lake without spending half a year on it”, as Roman Mikhailov, the Head of Development and Public Relations at the “Great Baikal Trail”, says.

The GBT Association gathers volunteers from all over the world for building trails around Baikal.

“Last year, we celebrated the 15th anniversary”, Roman continues. “During this time we have done a lot of things, and still they are not enough. Our volunteers built 500 km of trails – this is an impressive figure. But any path needs service:  repairs and cleaning. We cannot abandon our previously built trails. GBT participants do not build a single trail; instead, they build a system of hiking trails. Such a system exists both in Irkutsk Oblast and in Buryatia. The most famous sections are the 24-kilometer trail from Listvyanka to Bolshie Koty and 34-kilometer trail from Bolshie Koty to Bolshoye Goloustnoe. There are more difficult routes, for example, the 100-km “Frolikhinsky Coastal Trail of Adventures” in the north of Baikal. The GBT with German volunteers from “Baikalplan” spent several years on reconstruction of its sections.

“The trails mainly pass through nature reserves and national parks. In other places it is not always possible to pass safely; in general, in some places it is not allowed to walk at all. Try to imagine cliffs, rocks, impassable taiga forests... Only bears live there. For example, the Baikal-Lena Natures Reserve consists of 100 km of the wild western coast that is called “The Coast of Brown Bears”. You cannot stay there without an inspector equipped with a gun. However, this section can be passed on a canoe.

Roman Mikhailov started to work with GBT 6 years ago.

“I wanted not just to walk with a backpack and burn fires, but make myself useful or discover new places. The first couple of years I worked as a volunteer, and then the GBT won a grant, and they hired me to their staff. Before that I worked in a travel agency, taught English…

All the trails were built by volunteers. Aside from volunteers coming from all over Russia, foreigners also come to the GBT. They are united in a group and sent to the project point for two weeks. Volunteers live in tents, cook on a fire and work for 6 hours a day. They work with pickaxes, level the ground with shovels, clear the corridors of trails - remove the bushes and fallen trees, build bridges and brushwood roads, install signs. They use no equipment, except for chainsaws. 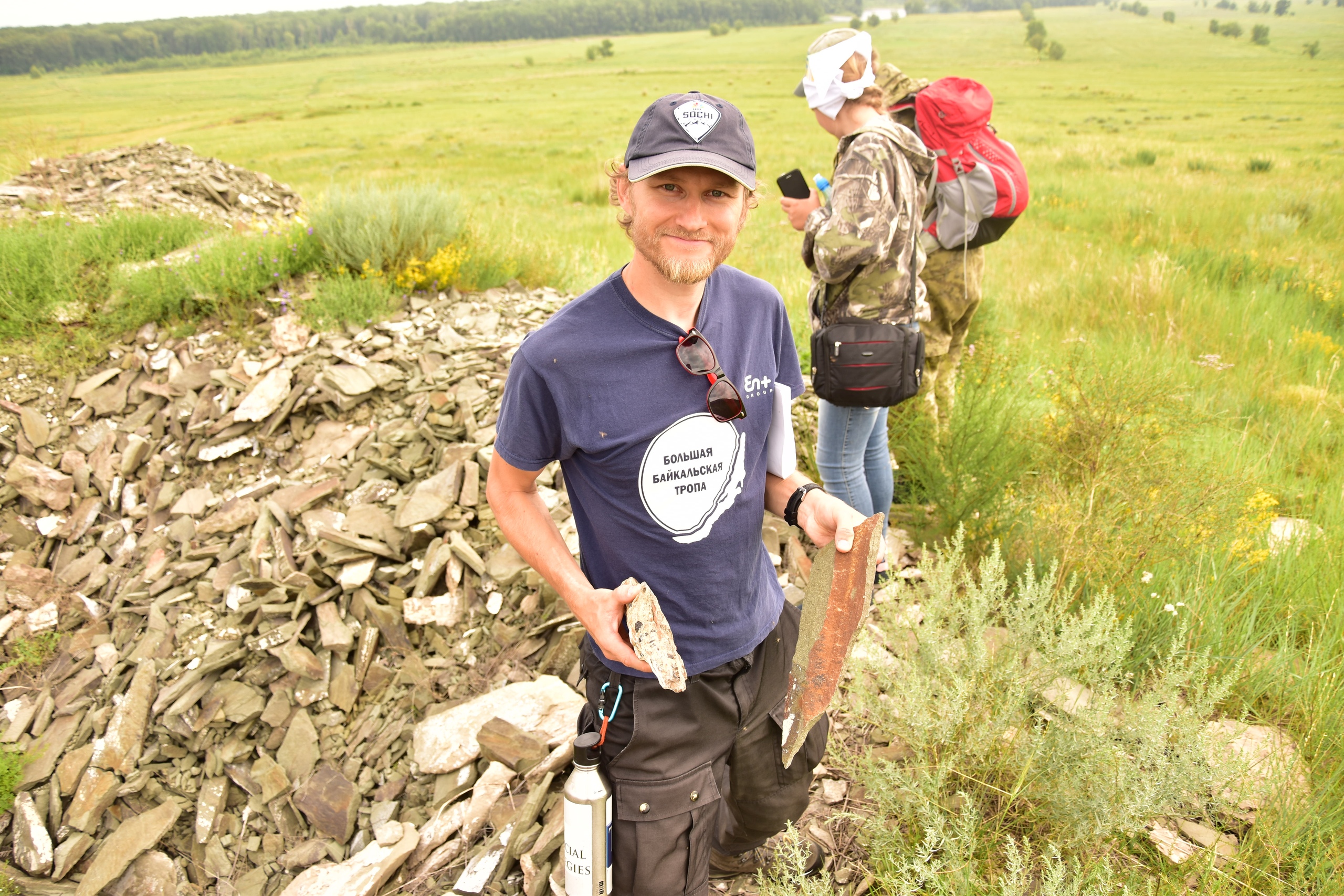 “This is very expensive and unreasonable for the time being; if we have a project in a suitable place, for example, dangerous one, we may need equipment there, because volunteers cannot be exposed to danger”.

This year, GBT has become an association and is implementing 15 projects with the support of a presidential grant.

“There are a lot of projects”, Roman says proudly. “We are currently working in the Pribaikalsky and Zabaikalsky national parks, Baikal Nature Reserve, in Barguzinsky and Severobaikalsky districts, as well as on the territories of some municipalities and forestry enterprises. There will be a couple of projects in the Baikal Reserve. There is a 12-kilometer trail there that goes through the cedar taiga to “Bear’s Corner” right within the Khamar-Daban ridge. The place is very beautiful. But the climate is wet there, the trail crumbles or is washed off pretty often: the it needs constant maintenance, but we only have few people.

Today, the staff of the “Great Baikal Trail” consists of 15 people. We should also mention the key personnel of experienced volunteers including 10-15 people.

“Last week, two of our specialists went to explore the valley of the Shumilikha River; the project titled “To the Country of the Barguzin Sable ” will be implemented there”.

Before beginning any project, several GBT workers explore the site: they go there, assess scope of work, the condition of the trail – the way it looks after the winter, what tools will be needed, where to get water, how to send a working team there...

After that, a group of volunteers with a team leader, a translator and ab assistant gathers at a strategic point – the GBT hostel in Irkutsk, in Ulan-Ude, or Severobaykalsk, then they leave for the project site.

When Severobaikalsk and Baikal-Amur railway were built, an old village was found in the mouth of the Tyya River; the settlement was abandoned in the middle of the last century. The GBT will build a new 20-kilometer trail leading from this village to the Slyudyanskiye Lakes. This project will begin in August.

Three years ago, the trail from the village of Bolshoye Goloustnoe to the Peschannaya Bay was blocked by fires.

“500-600 meters of the trail leading to the Peschannaya Bay were built last year, 300 meters were built one year ago, and we need a total of 50 km. The work is proceeding slowly, because all our main resources are spent on maintaining old trails. 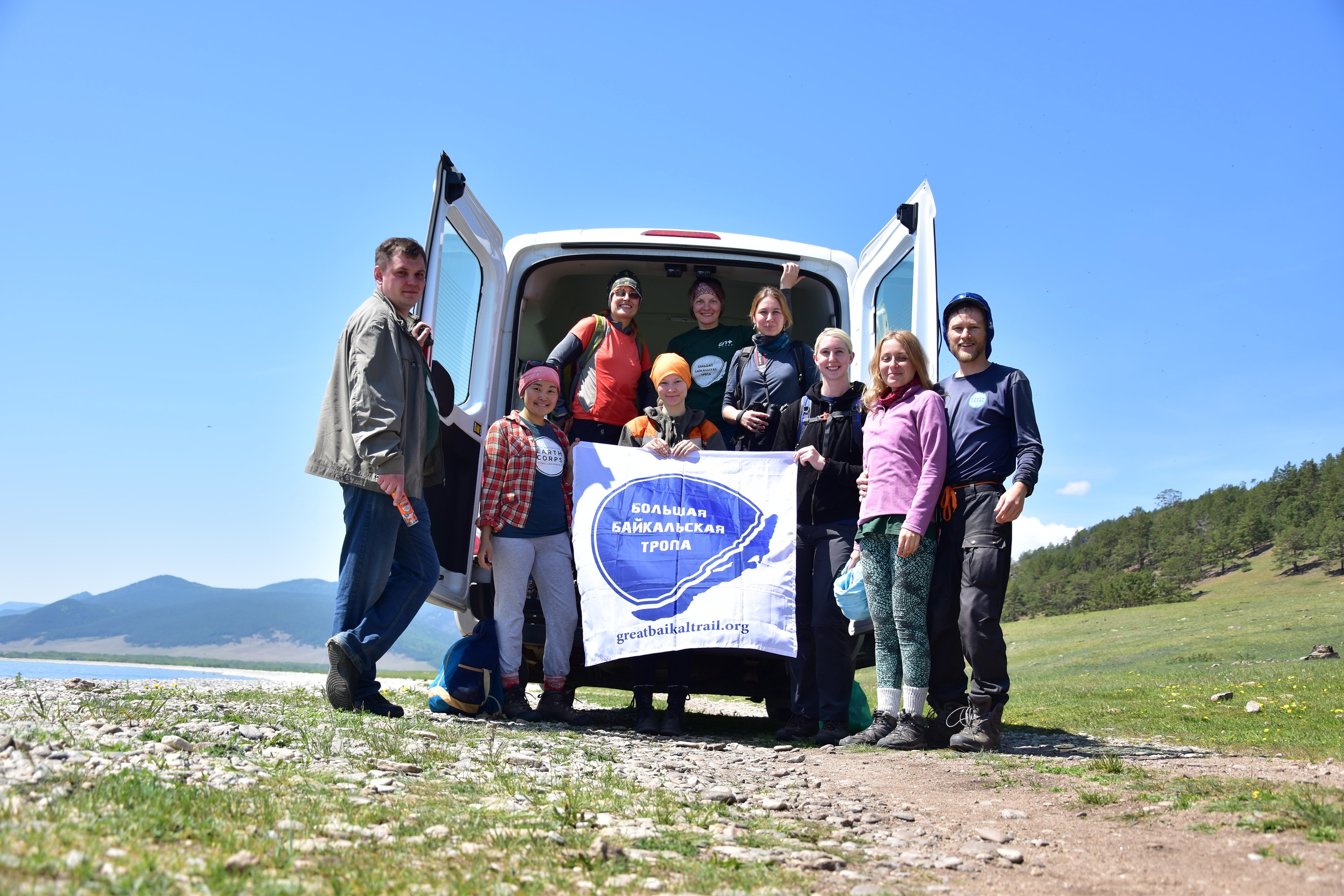 “We have constructed a path from Listvyanka to Bolshiye Koty, we could continue this work, but we need to maintain the trail: the summer traffic there is the biggest - from 200 to 300 people a day. Yes, these tourists throw away litter, but judging by our experience, I can say that there is much less litter on one big trail than on small parallel ones. You know, this is an effect of broken glass: if there is no normal trail, people themselves create a network of spontaneous trails. If we build one large and safe trail, instead of this network, people will only walk along it, and the amount of litter will decrease. Besides, it is very convenient to maintain it: one person will pass and collect all the garbage.

A properly construct trailed is the basis of ecotourism infrastructure. The amount of garbage found on the trail has grown smaller, but tourists also leave it in Bolshiye Koty. It is very difficult to take the garbage out from there; tourists do not know about it.

“Yes, garbage collection is a big problem for Bolshiye Koty, but when trail appeared, the village brightened up: guest houses opened, the store began to work all day long, not just for a couple of hours, like before. And although we do not know how local people treat tourists, the fact is that our trails are useful for the villages of Baikal region.

Our Projects are Implemented not only on Baikal

The Vityaz Cliff, a very popular place, is located in Shelekhovsky district on the Olkhinskoye plateau. In summer, morning trains carry dozens of tourists there and take them back in the evening. All kinds of people have been going here for a long time: schoolchildren, city old ladies, office clerks, and sports rock climbers.

“Everyone wants this place to become a natural park of regional importance. We try to be active drivers of this idea; this year we are implementing 4 projects there”.

The GBT plans to equip routes to 20 cliffs on the Olkhinskoye plateau during three years.

“We will repair the trails - remove the roots, improve the roads with pits and puddles, build bridges. Several years ago we built a bridge to the nearby “Idol” cliff. After a couple of years, it was washed away with water. So we restored it”.

Although many people know about the Olkhinskoye plateau, for the majority of people a one-hour walk to Vityaz always turns into a whole adventure. People get lost, wander in the forest.

“Inexperienced tourists need signs as much as air to breathe. And we focus primarily on the unprepared people”.