Those Who Make Lake Baikal Closer: the Volunteers of the Great Baikal Trail

An author of the “Key to Baikal” website has interviewed the three members of one of the oldest environmental organizations in Siberia that gathers hundreds of people who are not indifferent to the problems of the Lake every year. It’s them who are making Baikal more accessible and closer to us; they are a part of the Inter-Regional Public Organization titled “The Great Baikal Trail”.

Nevertheless, my goal was quite determined, and after the event, I interviewed the three members of “The Great Baikal Trail”: Natalia Ivanova, Natalia Tugutkhonova and Roman Mikhailov.

How did you get into “The Great Baikal Trail” project? 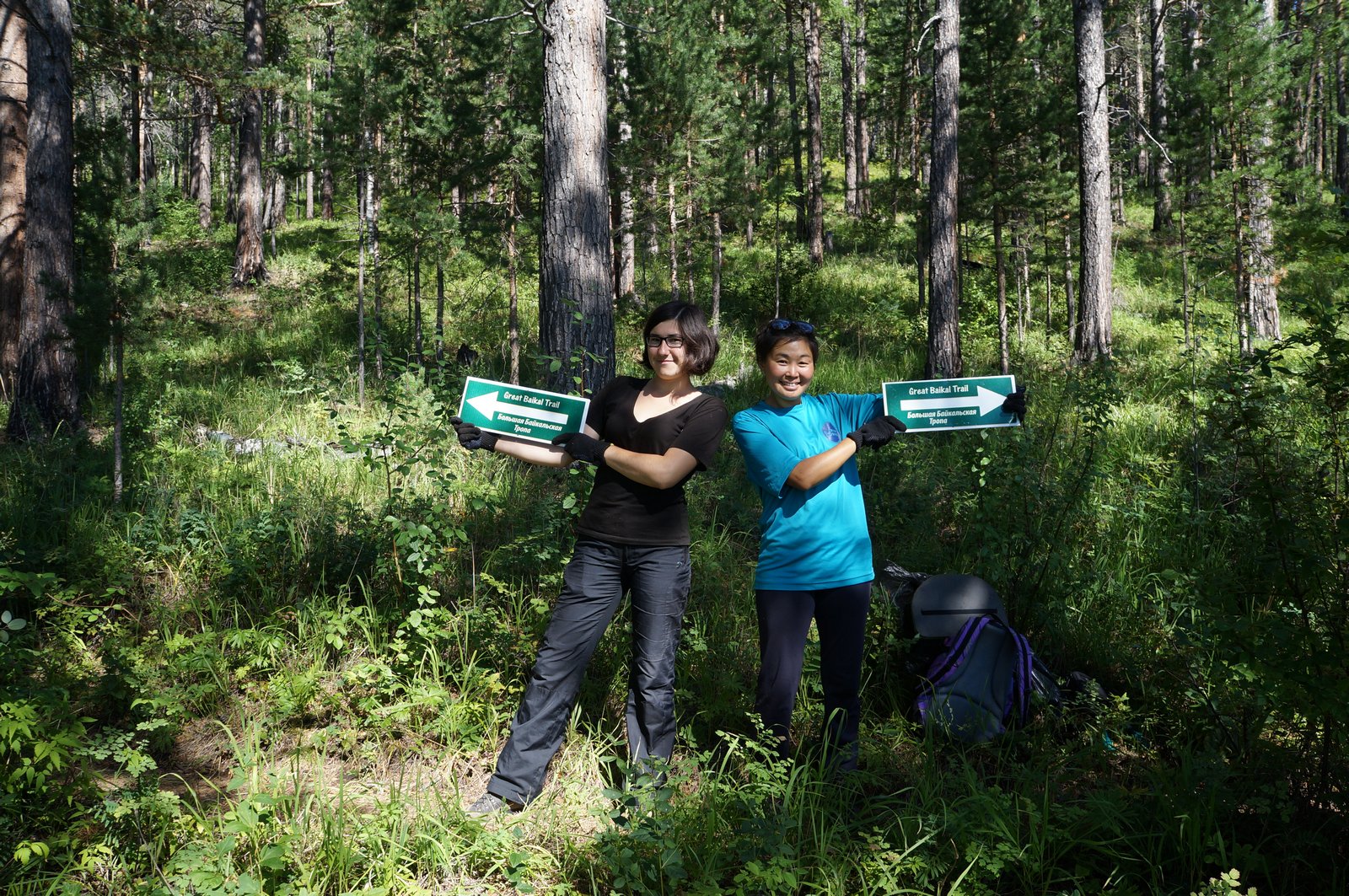 Natalia I.: In 2009 we travelled to the mountains as savages. Before we went hiking, we had bought a map of the Chersky Peak which also contained some information about “The Great Baikal Trail”. We have filed the application, then came to the project and ... somehow already got in it.

Everything was interesting! It came to the point that at first we could not understand why did someone work with a saw and why couldn’t we do the same? It turned out that only team leaders were permitted to work with a saw. And then we completed the courses, became team leaders and began to saw. When you’ve become a team leader, you can participate in the project as its main person. After that time I am constantly there.

What projects will be implemented this year?

Natalia I.: Last year we implemented a large project titled “Eco-action”. Within its framework we have marked a new route from Bolshoe Goloustnoe to Buguldeika. That is, last year we already determined where the trail would go, conducted the preparatory works. This year we will already start to construct this trail. This project is called “A Path to the Peschanaya Bay”.

Roman M.: This project is being implemented at the Pribaikalsky National Park, another two are being implemented at the Baikal Biosphere Reserve: “In Tune with Nature” and “To the Wilds of the Khamar-Daban Ridge”. The first of them is not directly linked to trails; the participants will paint a carriage at the station of birdbanding of the nature reserve, as well as improve the territory around it.

We will implement one more project titled “Northern Trails” in the North of Lake Baikal. This route runs from the Ludar Cape to Slyudyanskie Lakes. You already have no opportunity to sign up to it, there are too many of those who wish to participate.

And another trail will be performed at the Barguzinsky Nature Reserve. This will be a historical and ecological route for the demonstration of the geological formation called “Davshinskie Pillars”.

Do the trails around Lake Baikal have a positive impact on the settlements where they pass?

Natalia I.: Although some locals treat the inflow of tourists with negativism, but the most part of them see the advantages of it. Tourists bring not only trash with them. Of course, we notice this, too: if in the past the shop in the village of Bolshie Koty worked only one hour per day, when the ship with passengers arrived, now it works almost 24 hours per day.

Natalia T.: The availability of clear and safe paths and staging posts allows tourists to travel comfortably. They are less likely to litter, they’d rather carry trash until a staging post than throw it away on the road. Closing Baikal from tourists is not a solution of its environmental problems.

Do you interact with foreign and Russian organizations?

Natalia I.: We have an exchange program with the EarthCorps located in the city of Seattle, the state of Washington. Our young people who have been volunteering for several years and have been team leaders can get on training in America for half a year if they are of proper age. We recommend them, so they get invited there.

Natalia T.: There they are also involved in the construction of trails, planting trees in local (national) parks. The population in America is very advanced concerning volunteers’ movements, there a lot of volunteer projects; they really care about their environment. Our young people gain experience there and share their own “Siberian” experience. Then they come back home with the new experience and implement our projects.

The availability of clear and safe paths and staging posts allows tourists to travel comfortably.

Do foreigners also come to you?

Natalia I.: Volunteers from different countries come to us: 30% are foreigners, 70% - Russians.

Natalia T.: Foreigners are often obliged to volunteer. If you do not participate in volunteer activities for a certain number of hours, then you will not be able to enroll in a college or a University. So foreign young people who graduated from school come to us and get involved in our projects. After their return they report on the participation in our projects in order to continue their education.

Natalia I.: The same thing is gradually being introduced in Russia. Some universities of Moscow take the presence of a personal volunteer’s card into account upon enrollment. Last year these cards added ten points to the results of the Unified State Examination. 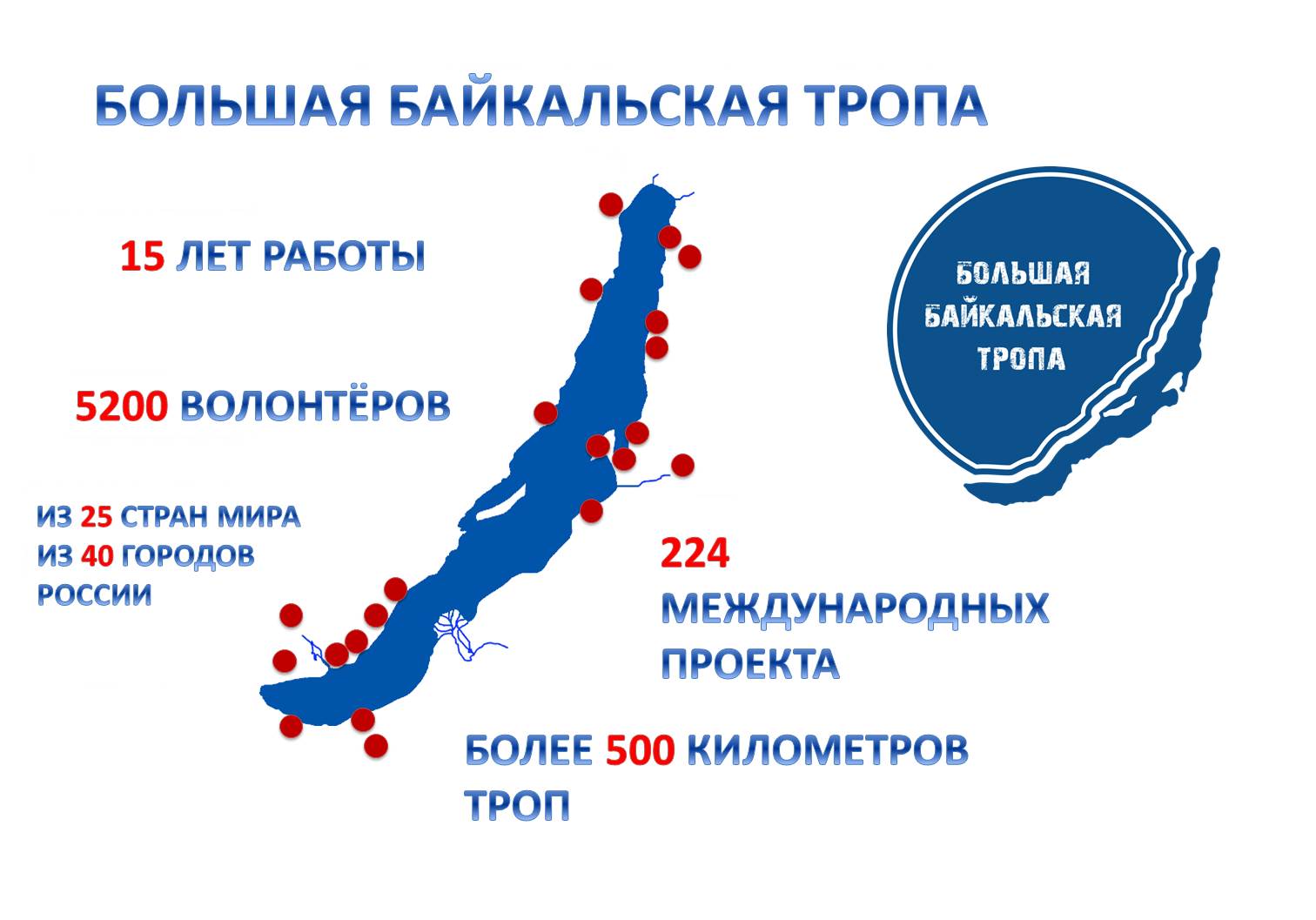 Thus, volunteering is becoming not entirely voluntary, is not it?

Natalia T.: Well, it's a good motivation for our society. (laughing)

Natalia I.: When you need to engage in volunteering not by your own will, but for the enrollment in a educational institution, on the one hand, this kills the idea of volunteering. But, on the other hand, few people come to this by their own will. They need a primary incentive to start doing something for the solution of environmental problems, creation of useful things for people or nature ...

And one more question: there is an opinion that Baikal is dying, what do you think of this?

Natalia I.: If we teach a new generation that Baikal needs to be preserved, the Lake will not die

Natalia I.: Even if Baikal is dying, then we can create the prerequisites to maximally prolong his life. However, in any case, whether this is true or not, we don’t know for sure. We are doing our work and believe that death is not threatening Lake Baikal.

After the talk with the volunteers who are doing a lot more things for the nature of Siberia each year than some people do during their entire life, you involuntarily take on their commitment and enthusiasm. After this interview you begin thinking: “Should I send an application for participation in “The Big Baikal Trail”?”