The Situation on Lake Baikal: No Changes So Far

We continue to keep you informed about the fluctuations in the level of Lake Baikal and why this is important.

According to the Yenisey Basin Water Administration, the level of Lake Baikal has dropped by another 3 cm by March 2, 2018 and reached 455.82 meters above the level of the Pacific Ocean.

A week prior to the resolution of the Yenisey Basin Water Administration, we wrote that “...the consumption of 1250-1300 cubic meters was established for the Irkutsk hydroelectric power plant, and has almost not changed since November 2014. <...> The capacities of 2000-2100 cubic meters per second were established for the remaining HPPs of the cascade beginning from the autumn of 2017 and are unlikely to change until the spring”.  The resolution contains an important point confirming the readiness of the Yenisey Basin Water Administration for unexpected turns within the next 30 days: “The operating modes of the water power facilities of the Angara-Yenisey cascade are subject to urgent correction by the Yenisey Basin Water Administration in accordance with the evolving hydrological situation.” The Directorates of Emergency Situations for the Krasnoyarsk Territory and Irkutsk Oblast are monitoring the situation on the rivers of Angara and Yenisey and are still forecasting neither the beginning of flood in March, nor any other dangerous phenomena on the rivers. 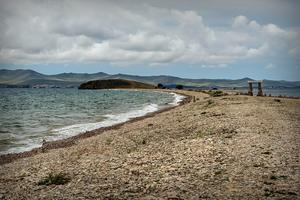 Question 1: Why is regulation of the water level in Baikal so important?

Another issue is the situation in Buryatia where the greater part of the Russian catchment area of Baikal is situated. 4 to 6 mm of precipitation fell in Ulan-Ude in November 2017, which made up half the standard amount. However, 41 to 47 mm of precipitation fell in December, which was 4 - 4.5 times higher than the standard amount. There has been nothing like this in Buryatia during the entire period of instrumental observations, since 1936. And this fact bothers the local residents, whereas the local authorities are preparing for a high flood on Selenga.

The Professor of the Russian Academy of Sciences, Director of the Baikal Institute of Nature Management of the Siberian Branch of the Russian Academy of Sciences Yendon Garmayev presented his forecast of the expected flood in his interview with “Inform Polis”: “The level of the spring seasonal flood on the rivers caused by the melting of snow in their catchment areas may be high. <...> First, a significant part of the snow cover will evaporate, be blown away by the spring winds. Secondly, the volume of melted water that will directly replenish the riverbeds depends primarily on the weather this spring. In case of a rapid increase in average positive daily temperatures of the surface layer of air, the snow melts and immediately turns into a surface runoff that enters the riverbed over the frozen ground, without infiltration losses, thereby contributing to a rapid rise in the water level and its possible escape to the floodplain and terrace. In addition, we must take into account the process of break-up of the ice on the rivers and the course of ice drifting. In such cases we may expect increased water level and floods. In case the spring is delayed and passes with separate thaws and frosts, a significant part of the melted water will be lost for infiltration, moreover, the soil has been dry since last season and is now was waiting for moisture. Under such a scenario, we should expect no sharp increase in the level of river water and, consequently, no floods”.

Now we see that there are several case scenarios for April and May 2018, and every temperature drop, every windy or cloudy day will affect the scenario of spring flood and the level of water in Lake Baikal. We continue to monitor the course of events and will inform our readers about them.