During almost 9 years since the beginning of my volunteering activities and my recent work with the “Great Baikal Trail”, I have managed to participate in a dozen projects on the construction of trails and fall in love with the summer Baikal with its sunny days, turquoise water and green coast where I spend almost every summer with volunteer groups.

I was aware of winter projects of GBT earlier, but, frankly speaking, did not take them seriously. I thought, “How could one volunteer in winter? After all, you cannot construct trails, plant trees or collect garbage in winter. It’s just some nonsense!” 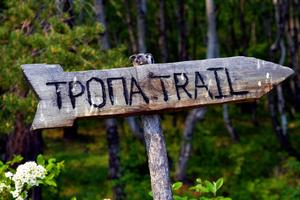 Let’s Make It Happen: How to Become a Volunteer at Lake Baikal

A year ago, I took part in the winter project of the “Great Baikal Trail” for the first time: I was handed the reign of a team of volunteers in the Baikal Nature Reserve, and I have absolutely no regrets. Moreover, I returned from my second winter project a couple of weeks ago. All things in this life change. My opinion about the impossibility and uselessness of volunteering at Lake Baikal in the winter has also changed. The assistance of volunteers is always necessary and important, regardless of the season!

One of the frequently asked questions sounds like follows: “How do you construct trails in winter? Don’t you construct them? What are you doing then?”, so I think it’s worth telling about the course of my last project, then it will become more clear what we are doing with the GBT during the season when the construction of trails as well as other environmental activities are impossible due to snowdrifts. 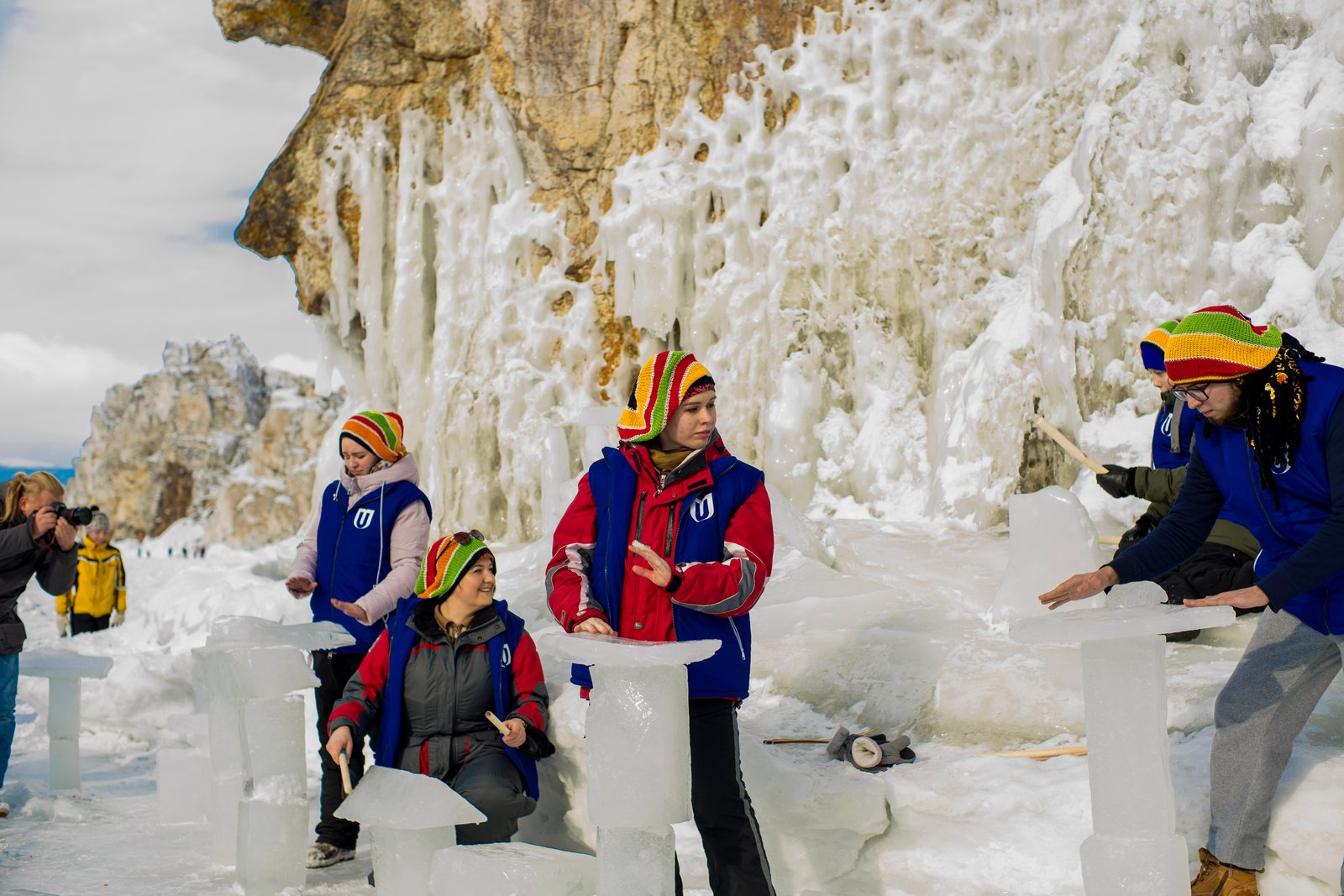 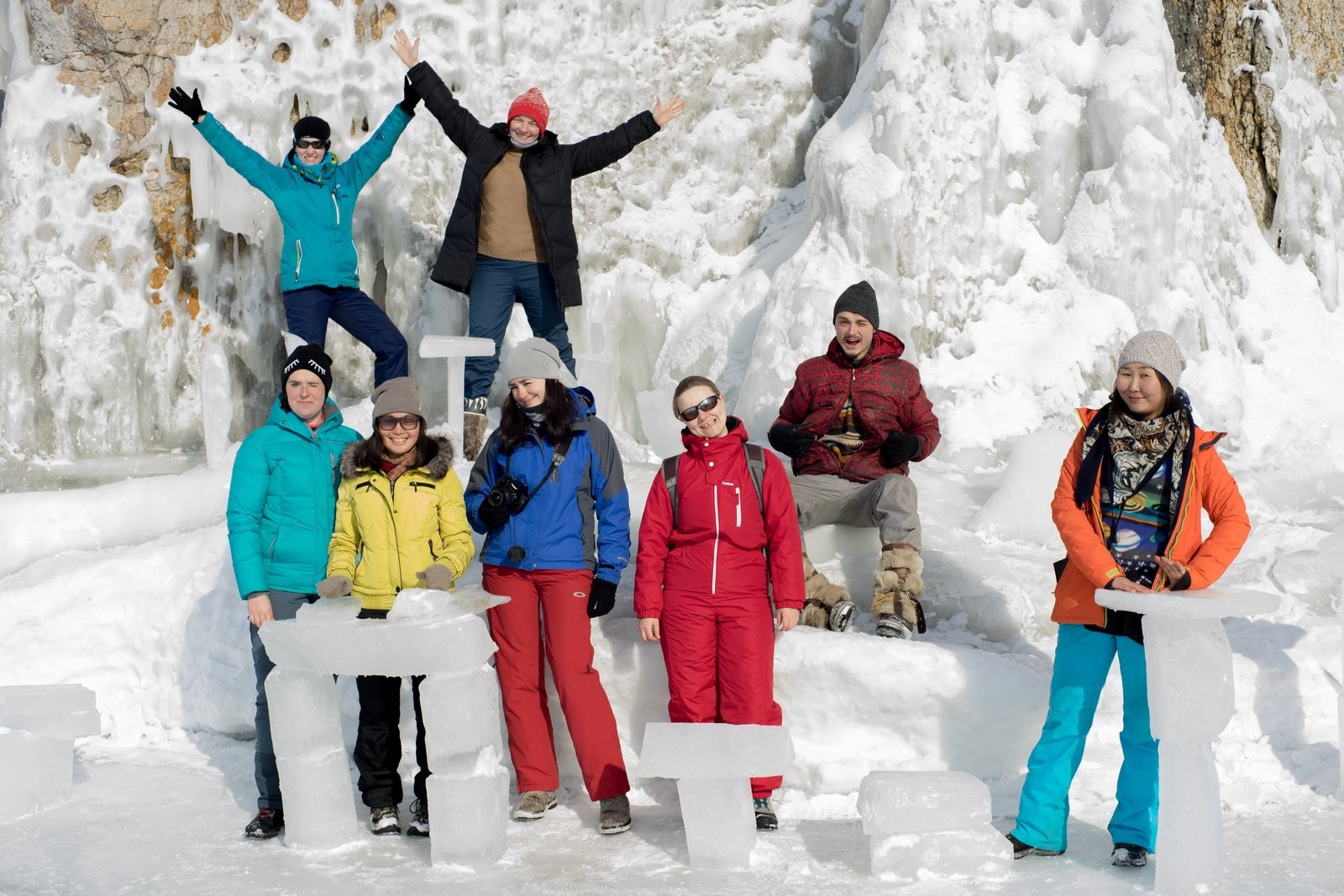 The volunteer project of the GBT titled “The Ice-Bound Island” has been held on Olkhon in March of this year. © Photo: Natalia Tugutkhonova 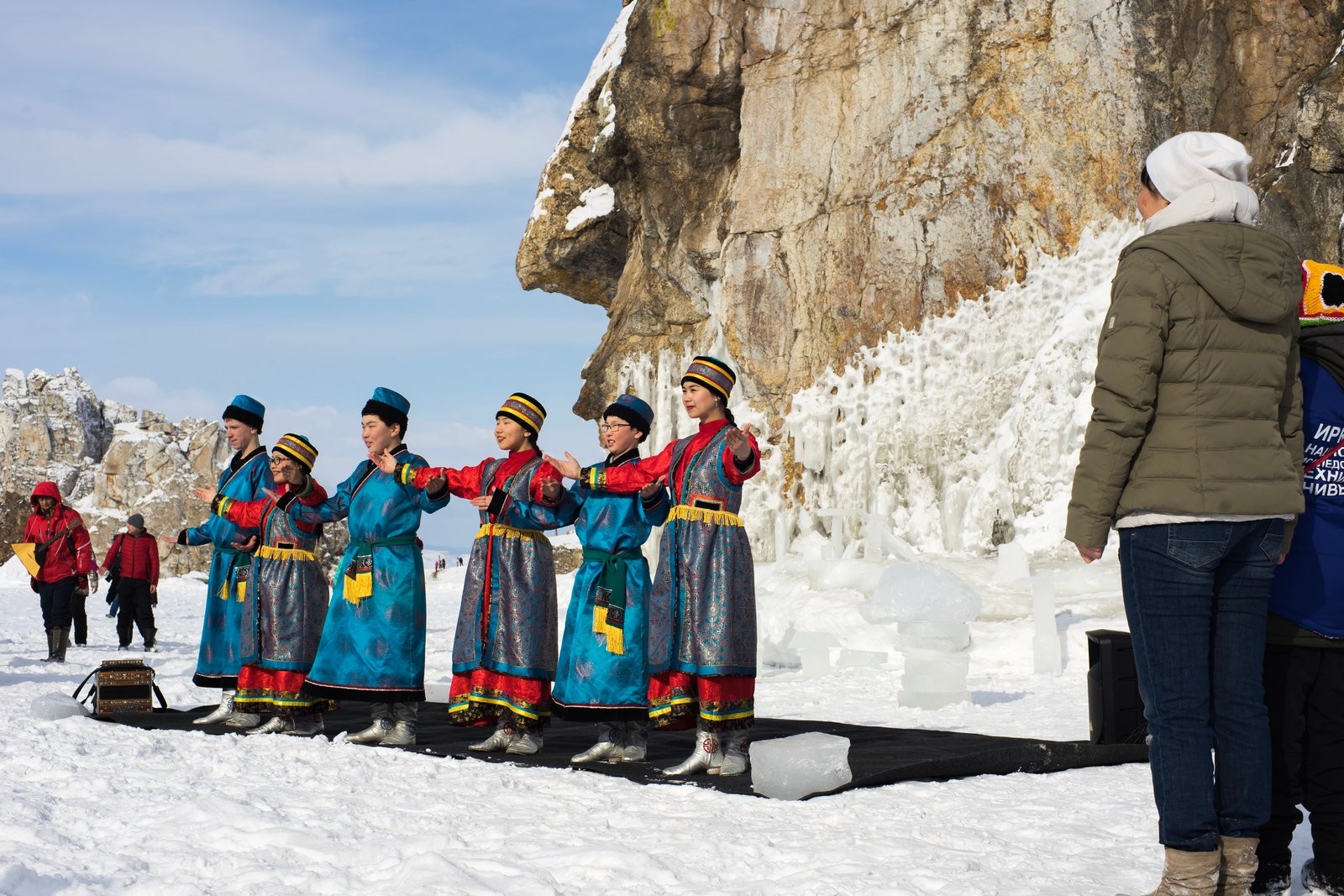 The volunteers participated in the preparation of the “Blue Ice” Classical Music Festival which has been held in Olkhon for several years. Musicians from different parts of Russia come to perform at this festival. Here you can see the performance of the traditional Buryat “Yokhor” dance. © Photo: Natalia Tugutkhonova 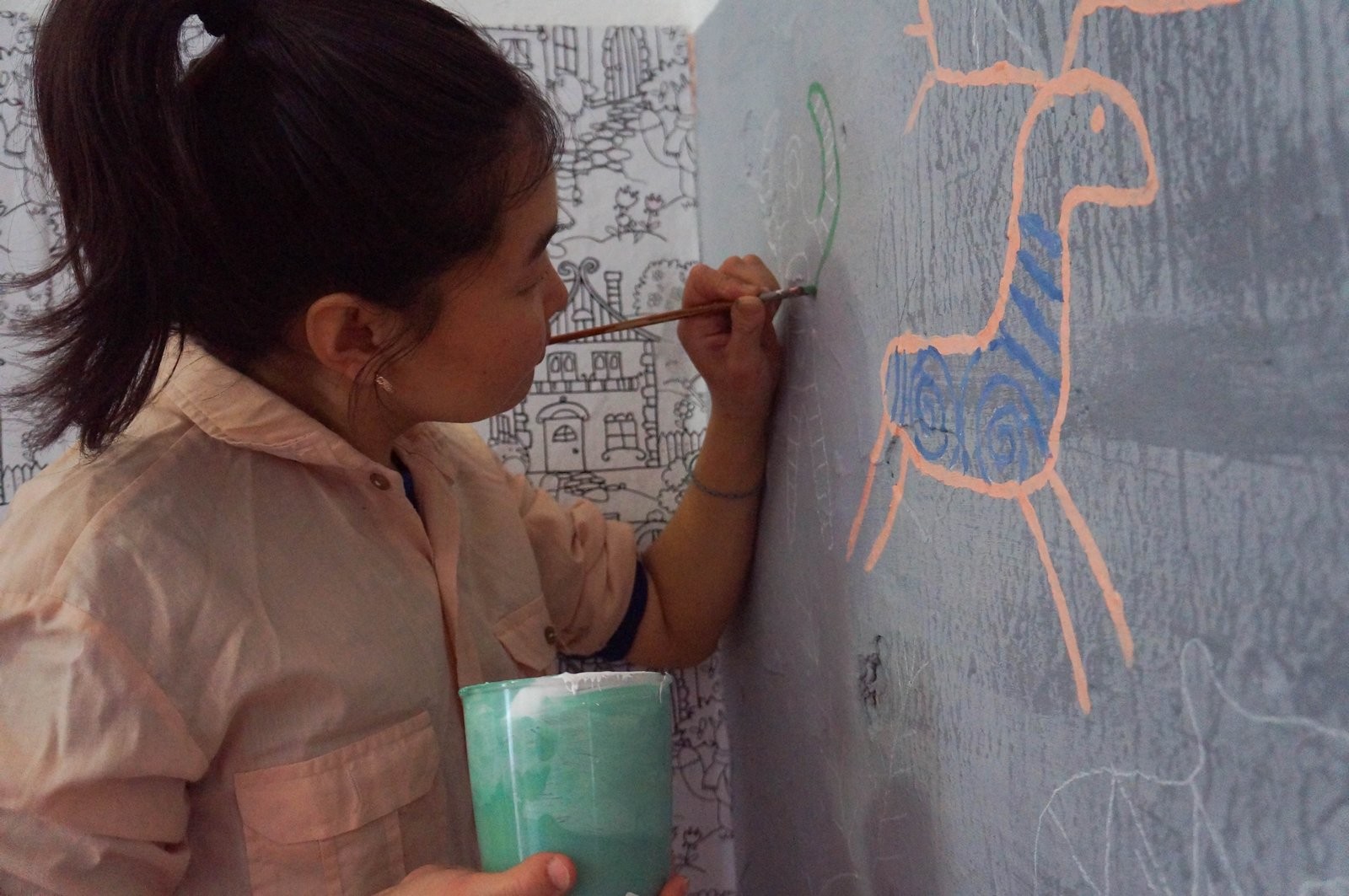 The volunteers also completed the repair in the music school started by the previous volunteer shift. The team painted the walls, cleaned and prepared classes for the arrival of students. © Photo: Natalia Tugutkhonova These guys walked along the winter frozen Baikal, like any participants of volunteer projects do here in winter. © Photo: Natalia Tugutkhonova 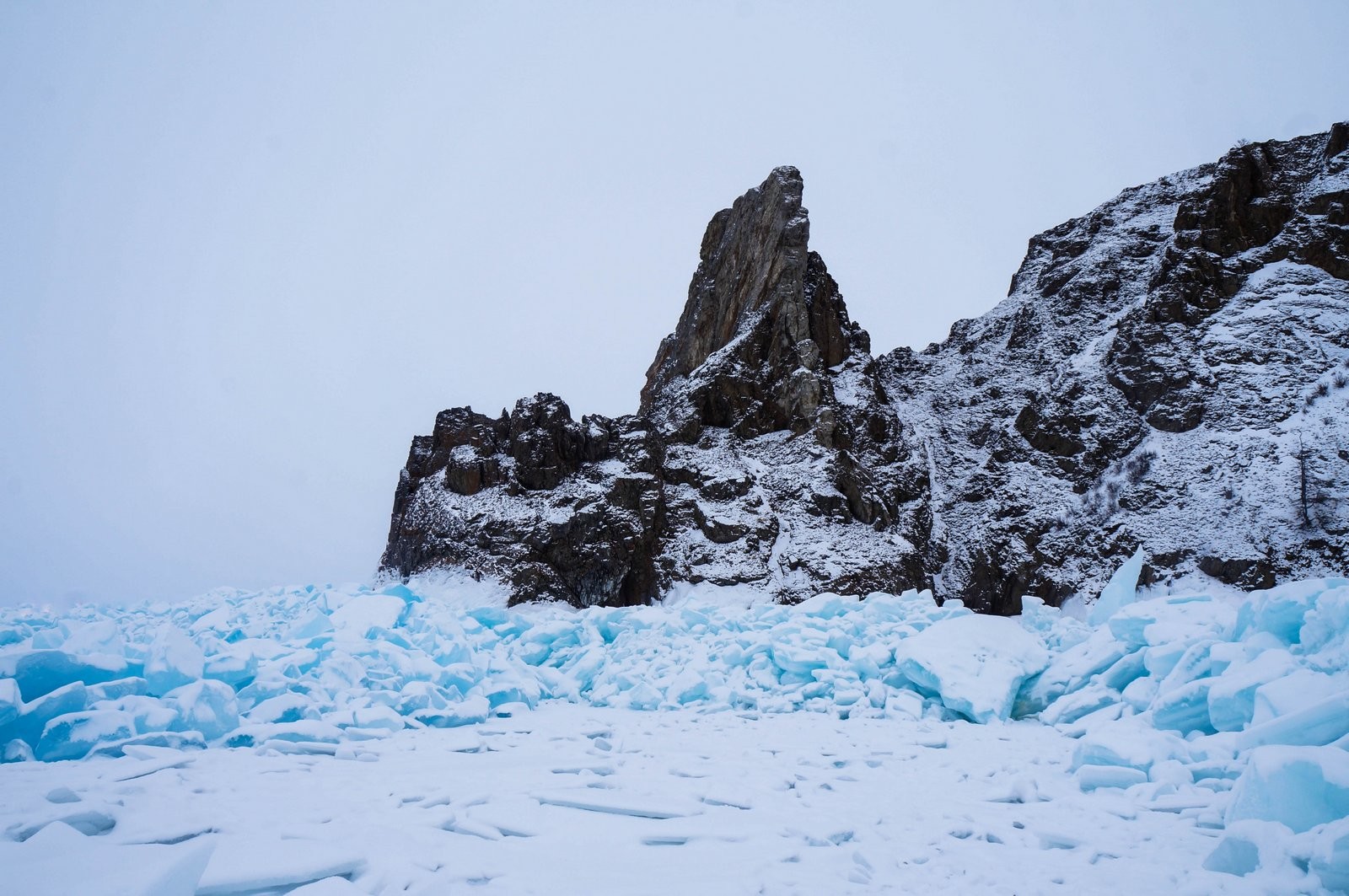 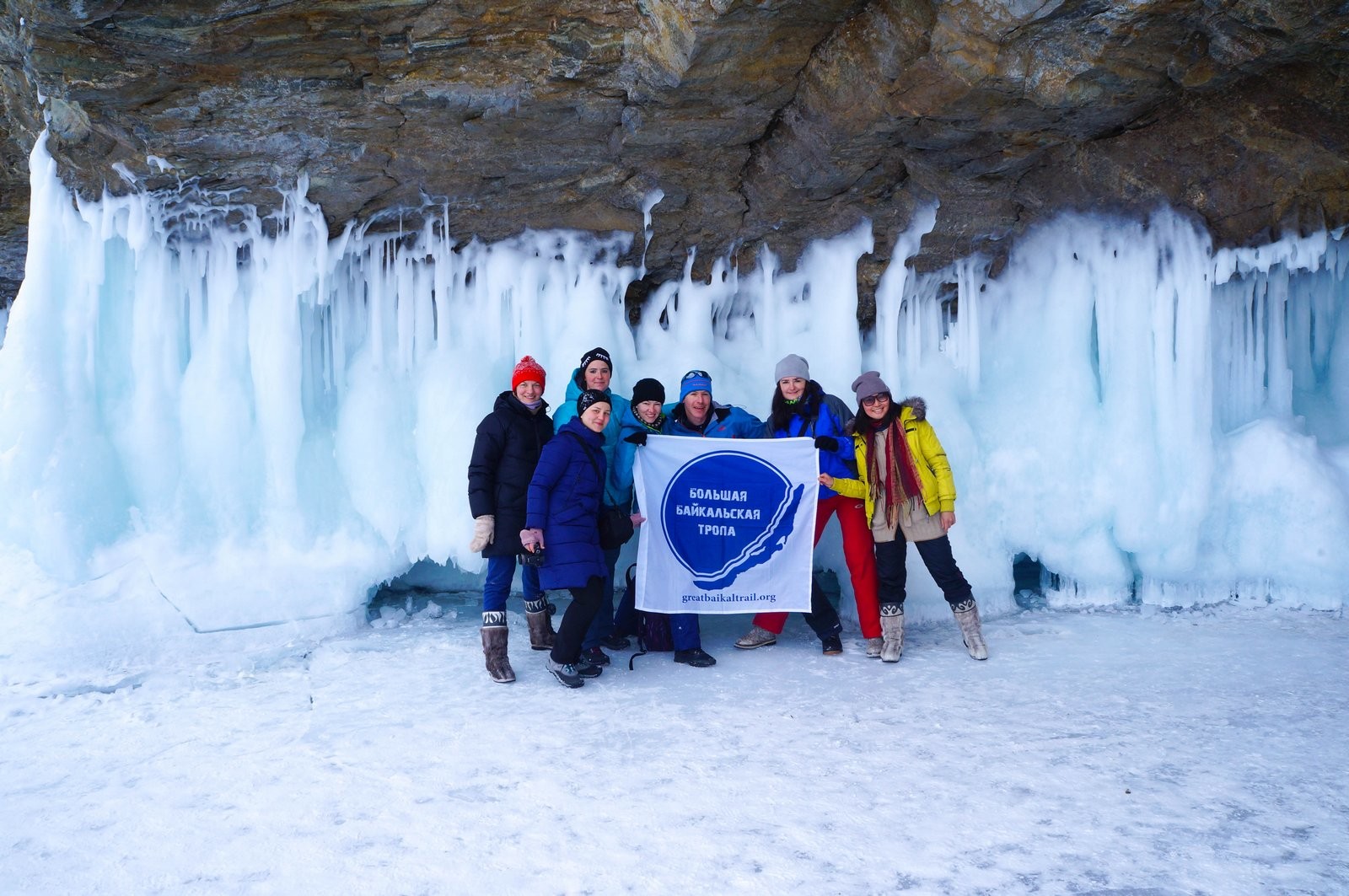 The volunteers traveled along the lake during their spare time: they visited the northern part of the island and admired the amazing transparent turquoise ice and grottoes. © Photo: Natalia Tugutkhonova 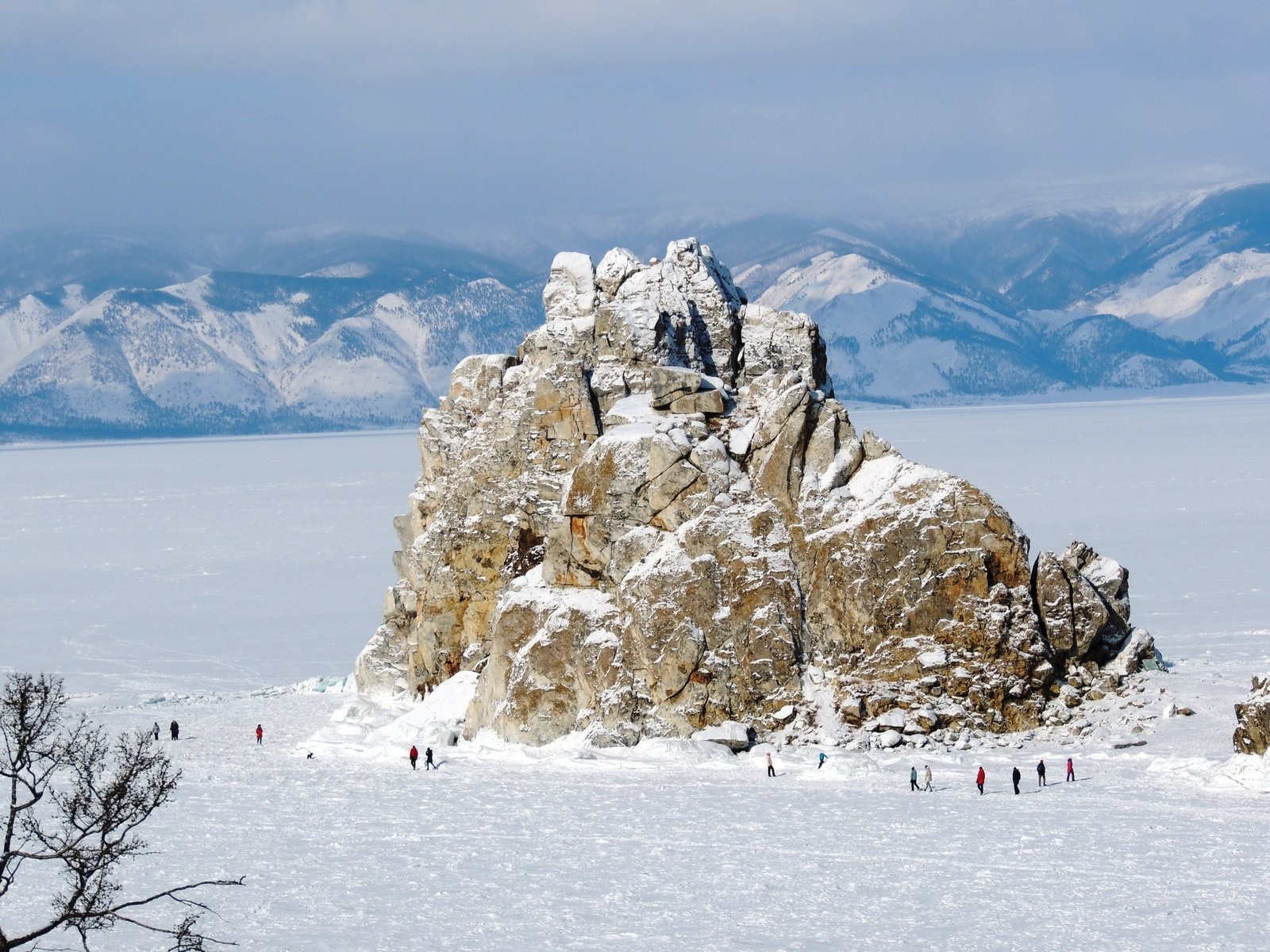 Of course, they saw the majestic Khoboy cape “from the water” (to be more precise, from the ice of the lake). © Photo: Natalia Tugutkhonova 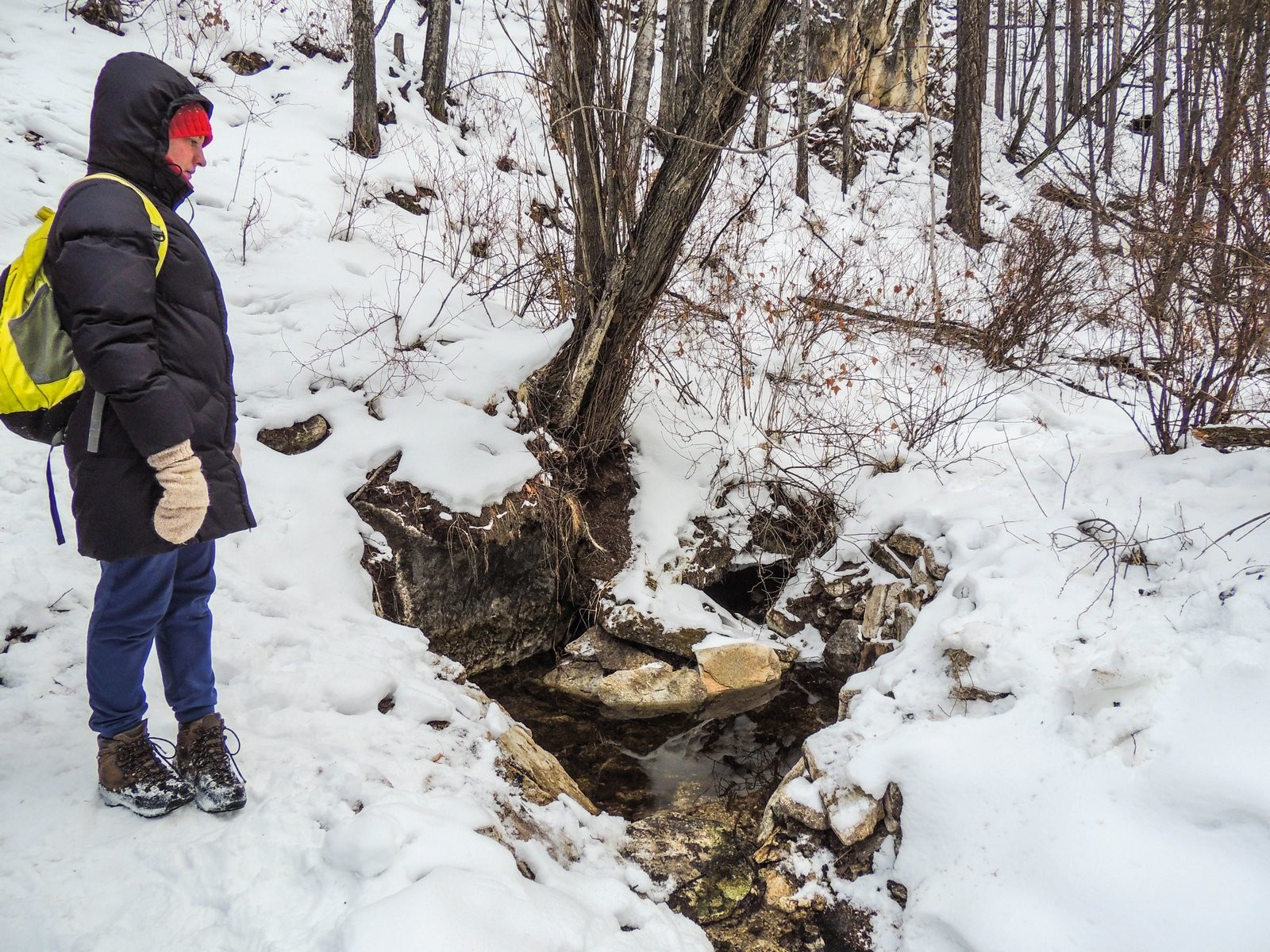 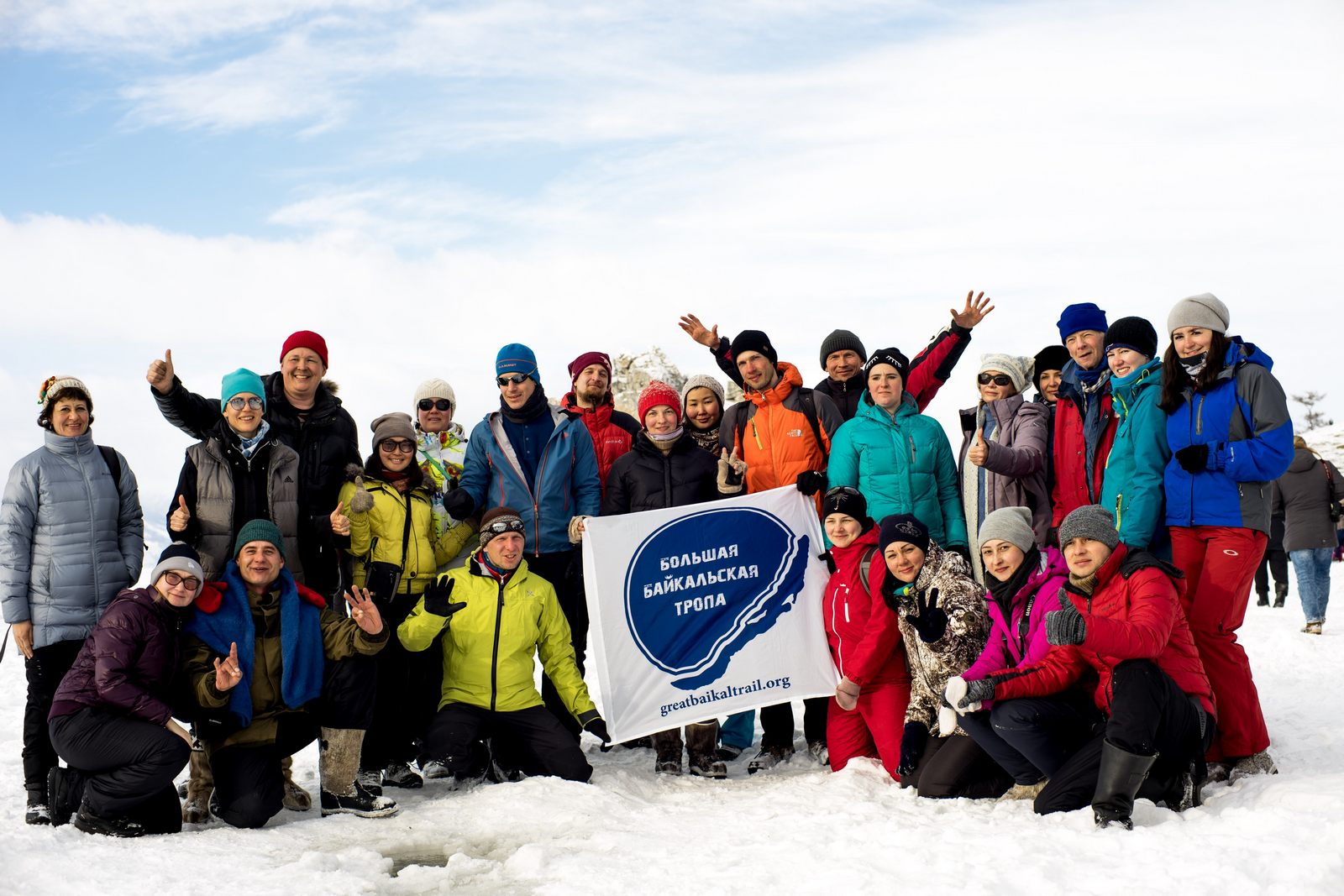 If you want to not only visit Baikal, but also do something useful, and you cannot come during the summer holidays, then you should know that you can always find a way out. Winter GBT volunteer projects are waiting for you! © Photo: Natalia Tugutkhonova

Our March volunteer project was called in a beautiful way: “The Ice-Bound Island”. The name implies exactly where the project took place -- of course, on the island. And which island is the largest on Lake Baikal? Surely, it is Olkhon.

Our team spent more than a week in the village of Khuzhir on Olkhon, I had enough time to enjoy the snowy and icy beautiful Baikal landscapes and worked really hard.

The main objective of the GBT winter projects is volunteer assistance to SPNR (nature reserves and national parks), as well as assistance to local residents in the implementation of their interesting, useful and socially relevant initiatives.

Our team participated in the preparation of the Festival of Classical Music titled “Blue Ice” that has been organized on Olkhon by its residents for several years already. Musicians from different parts of Russia come to the festival, and the audience that enjoys the artists’ performances consists both of the residents of Olkhon and the numerous visitors of the island.

One of the features of the festival is the fact that some of its events are held directly on the ice of Lake Baikal:  it is very unusual and incredibly authentic. The team of GBT volunteers had a highly sensitive task:  to construct a platform for performers on the ice. We used shovels, brooms, chisels, saws, neat bricks cut out of the real Baikal ice and our restless imagination. We did a great job with a magnificent result!

Then we helped to organize the performances and at the same time got acquainted with talented musicians, learned that Baikal ice could be used as a musical instrument, listened to the romantic songs sung by one of the oldest residents of the island, danced to the accompaniment of a Russian harmonica and even danced “Yokhor” - the national Buryat dance. Volunteers were really impressed by what they saw and heard at the festival, especially those who came there from other regions.

In the course of the remaining volunteers’ workdays, the members of our tight-knit GBT team worked as artists-designers. During one of the days we were decorating the walls in the Khuzhir general education school, having previously asked the pupils of primary school about what pictures they would like to see in the hallways of their favorite educational institution. 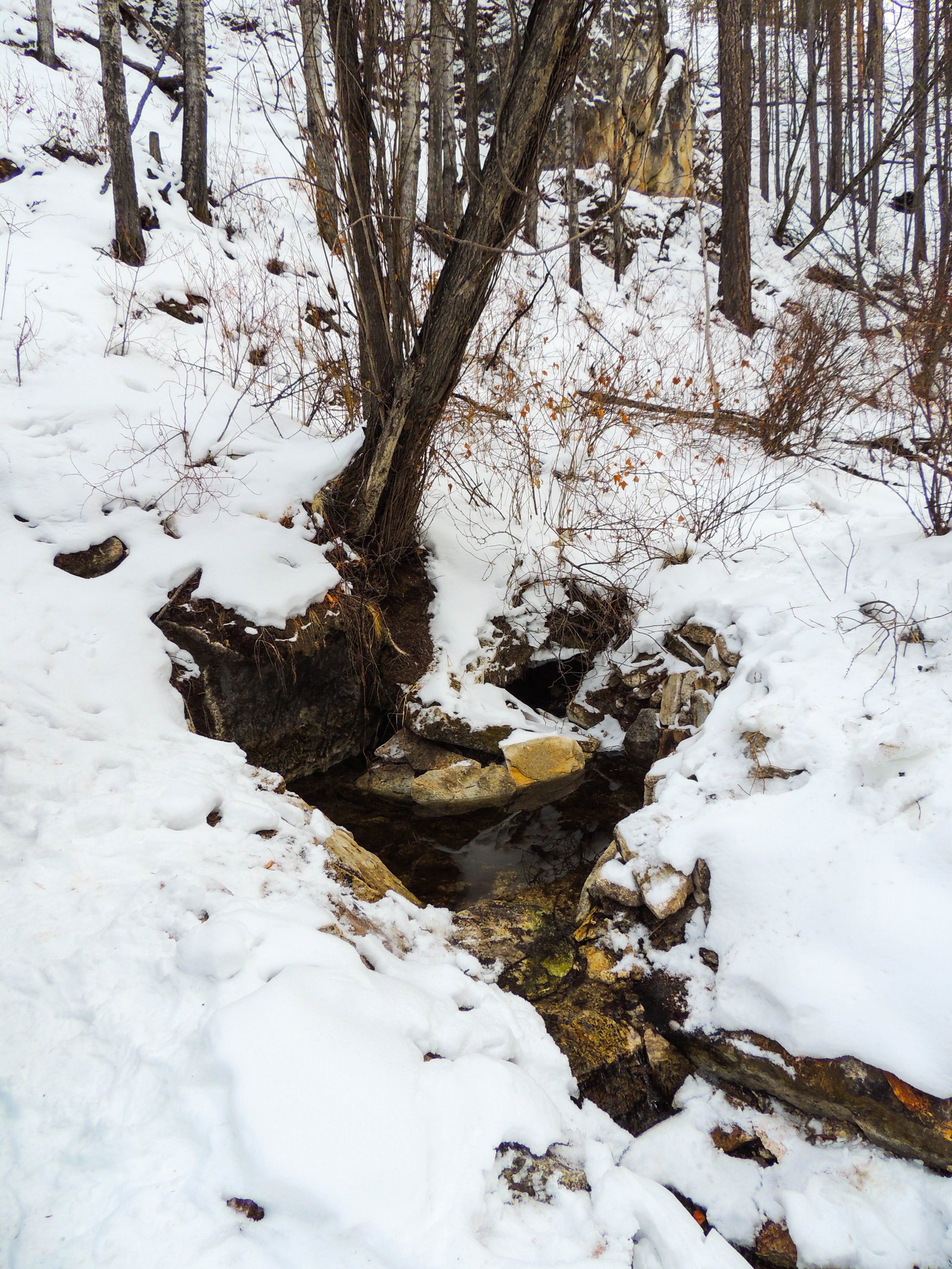 The volunteers of last year’s winter project on Olkhon have begun the repair of the local music school: they dismantled the walls, took the construction debris away, prepared the premises for big changes. And our project completed this repair: we smoothed and painted the walls of the new classrooms which will soon be ready to welcome talented young students.

And this is not the full list of things done by my inexhaustible team during our time on the island! During the days of the project we were hospitably welcomed by the “Manor of Nikita Bencharov”. In gratitude for this, we spent our last working day repairing the music hall in the manor: painted the walls, floor and even the ceiling. We are sure that the beautiful renewed hall will host many events of the village, dozens of local residents and guests of the island will gather there and enjoy these events.

The participants of the winter projects of the GBT can enjoy themselves, too. On our well-deserved day off we visited the northern part of the island. We admired the amazing transparent turquoise ice, managed to examine the mysterious grottoes which are hard-to-access during the most part of the year, heard the legends about the island of Olkhon, saw the majestic Khoboy cape “from the water” (more precisely, from the ice of the lake). As it turned out, the most far-sighted participants of the project took skates (someone was carrying these even from Moscow!), so we had an opportunity to skate along the largest skating rink in the world – Baikal – with the wind in our faces.

Well, can a GBT project do without a hike? One day we stopped working earlier than usual, took thermoses with hot tea, and went into the woods to check the state of the spring titled “Vtoroy Klyuchik” (“The Second Spring”), cleared by our volunteers and local enthusiasts last autumn. The spring looked great, and we, in turn, created an information board about the importance of preserving springs within the framework of our winter project.

I assure you that the project “The Ice-Bound Island” was a success; the volunteers left home satisfied with the work they did and in love with the winter Baikal; whereas the residents of Olkhon who became our friends said that they would always be happy to welcome us again.

All in all, if you want to not only visit Baikal, but also engage in some useful activity, and you cannot do this during the summer holidays, then you should know there is always a way out.

Last, but not least, the winter Baikal is truly amazing! Everyone should see this beauty with one’s own eyes at least once in a lifetime.