Positive Changes: "Only One Fire in the National Park"

“The spring has passed, the summer has come; forests are burning somewhere again”. This simple Russian childish poem precisely describes the situation with forest fires that occurs in the Baikal region every year. What to expect this year, how the elements are monitored, supervised and controlled, - all this was told to “Key to Baikal” by Mikhail Yablokov, the Director of the “Reserved Baikal” FSBI that united the Baikal-Lena Reserve and the Pribaikalsky National Park.

“Key to Baikal”: Mikhail Sergeyevich, are fires on protected natural territories different from usual forest ones? Are there any differences in their causes, in the conditions of firefighting?

Mikhail Yablokov: The peculiarity of protected natural territories is the fact that the most part of them is not accessible to tourists because of remoteness and impassability; a special permit is needed for visiting, visits can be completely forbidden during the period of special fire prevention regime. That is why the human factor is not the most frequent reason for the occurrence of fires in the forests of the National Park. It is typical for the southern part of the territory of the Pribaikalsky National Park having several inhabited settlements. Last year six out of nine forest fires occurred due to human fault, but they were within the area of ground response, the size of fire spots was insignificant, and their extinguishing took about 4-8 hours (for comparison - large fires in deep taiga can be extinguished only for a period of time exceeding a week).

“KTB”: Two of the most frequent causes of forest fires in the National Park are dry thunderstorms and transition from neighboring territories, forestry lands or private forest areas.

MY: Fires caused by dry thunderstorms are evenly distributed throughout the nature conservation area on the map, they are small, quickly tracked and extinguished – a lightning strikes the top of the tree, the latter burns from the top down, therefore, slowly. And, on the contrary, the fires that come from adjacent territories are already full ablaze, so it is more difficult to fight with them. It is understood that they are located all along the perimeter of the borders of the National Park. The fight against them is conducted in close cooperation of all services - the Ministry for Emergency Situations, forest protection, local administrations and volunteer associations. It is also clear that in this case the priority fight against fire is not for nature conservation areas, but for inhabited locations.

“KTB”: How is damage from forest fires estimated? 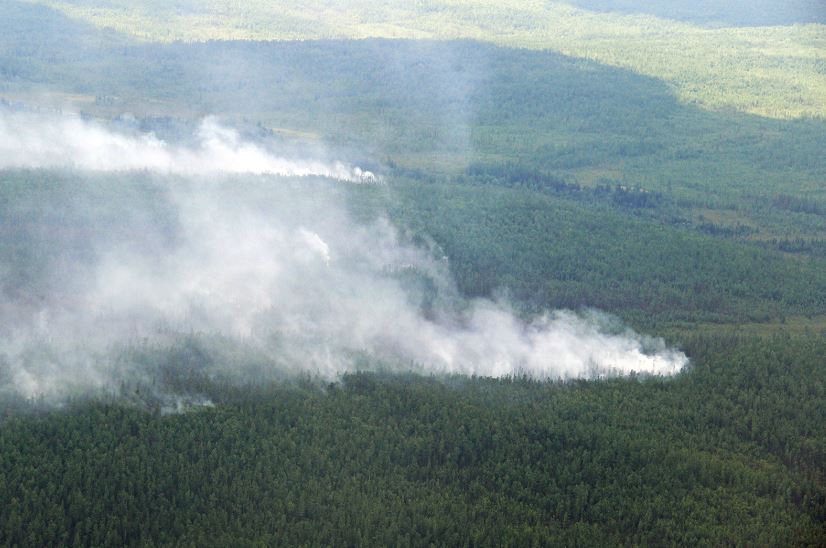 MY: This is an interesting questing. The damage from forest fires is usually expressed in roubles and estimated from the point of view of economic use of the territory. For people the forest means wood that we can cut and sell. We can calculate the volume of cubic meters that have burnt and the amount of its cost. This is the traditional approach. But when we speak about specially protected areas, either a reserve or a National Park, one must remember that these forests are out of economic use. A reserved forest does not have any economic value. Natural processes are underway on such territories. The tree should grow and then die on some place - we do not touch anything. From this point of view, the concept of damage becomes blurred.

“KTB”: Fires are a natural process for the territory of Eastern Siberia:  there is a cycle of vegetation phases.

MY: The territory is burnt, it is naked, then mosses, grass, trees grow on that place, young plants are replaced by thick groves, animals concentrate there: elks and deer that feed on these greens ... Fires allow to maintain the biological diversity of the territory - if the forest does not burn, the species that live on burnt areas cease to exist there. From the point of view of nature, there is no category of “harm” or “use”, there are natural processes and those affected by the mankind.

“KTB”: But if you try to estimate damage in absolute categories, can you compare the consequences of fires for the last few years with the figures that you have?

MY: The year 2015 was the most difficult from the point of view of forest fires. 85% of the territory of the National Park is within air reach, which means, the places are not accessible for land transport, forest fires are extinguished only with the involvement of aircrafts. Two years ago the joint actions of all emergency services were not yet worked out, so the response time grew, which led to uncontrolled expansion of fires.

52 forest fires were recorded in 2015. 126.5 thousand hectares of forest were burnt. In the following year all prevention and firefighting measures were already worked out, so there were only 24 fires, the area of the burnt forest amounted to six and a half thousand hectares.

“KTB”: Well, finally, is it possible to sum up the results of the beginning of the fire-dangerous season this year? How did the spring pass?

MY: The situation has been favorable since the beginning of the fire-dangerous season this year. The only one fire recorded on the territory of the National Park occurred in Slyudyansky District, in the Marituiskoe Forestry on April 28. It was detected in the morning not far from the inhabited settlement of Staraya Angasolka. This fact also lets us make conclusions that its reason was a bonfire lighted up on the night before and not extinguished afterwards. Due to the strong gusty wind and dry hot weather, the fire spread rather quickly, there was a threat to Staraya Angosolka, but the fire was quickly isolated and extinguished thanks to the coordinated work of the firefighters of the National Park with the Ministry of Emergency Situations, the Eastern Siberian Railway and the administration of the municipal formation. The fire rising on the slope of the Baikal Range had to be extinguished with the involvement of aircrafts - the Be-200 aircraft discharged nine portions of water in two days, bringing down almost a hundred tons of water upon the taiga.