Do not Fire at Ringed Seals

The beginning of the year was marked by a huge environmental scandal. One of the tour operators of Irkutsk offered an unusual service: hunting Baikal ringed seals.

These cute and intelligent animals have long been a symbol of Baikal and the Baikal region. Two sealariums in the regional center and in Listvyanka, the tourist mecca of the region, have been working for a long time: they are extremely popular among public. The offer to hunt these animals caused a storm of protest. The case was transferred to the Environmental Prosecutor’s Office. The situation has been settled: the barbaric service  has been removed from the tour operator’s price list, the old link of the web site titled “A tour for hunting ringed seals” now leads to the page of “not found" mistake, officials assured the ecologists that nothing threatened ringed seals any more. In our turn, we attempted to figure it out what really happened, how this was possible, and if there was any reason to hunt ringed seals. 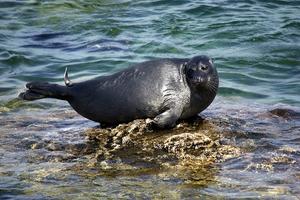 We got through to the “Baikal-safari” tour operator and asked for a talk about the prohibited hunting. The tour organizer called Maksim willingly explained what had happened. He claimed that it had nothing to do with the tourists hunting ringed seals. The clamor was caused due to the incorrectly formulated information on the website of “Baikal-safari”.

“The information posted on the Internet was a bit incorrect. What we offered was not hunting, but wild photography. To be more precise, the service implied the transfer of tourist groups to the camp of the Evenki, who, according to the law, were engaged in traditional national hunting. Of course, no one suggested that tourists would kill the animals; they could watch from the sidelines and take photos. We did not stress this fact; it was only one of the tours. But we decided that if the Evenki did this, we might show this to the public.”

Key to Baikal: Where did it have to take place?

“Baikal-safari”: This is the northern part of Lake Baikal. I do not know the exact location; I only heard that there is an Evenki community somewhere on the coast. Contractors had to deal with it; we would address them upon the receipt of requests. I must underscore that no such orders were received during the six months of existence of this service offer. This tour was not popular at all.”

Key to Baikal: When and how did you start having problems because of this item on your price list?

“Baikal-safari”: Well, I would specify that there were no problems, there was a misunderstanding. Some Irkutsk bloggers saw the service, published the news on their web resources, they emphasized the fact that we offered to kill ringed seals for money. Then snowball effect followed. The representatives of the public appealed to their deputy, he made a deputy request to the Environmental Prosecutor’s Office. They audited our company, talked with our management.

Key to Baikal: Is it true that as a result of communication with the Prosecutor’s Office, the service was removed from your web site, and you no longer organize similar tours?

“Baikal-safari”: Yes, we removed it without any regret, because there was no demand, instead, we attracted negative attention due to this offer. On the other hand, we have changed the essence of the service. There is a tour “A visit to the Evenki” including neither ringed seals nor hunting. But those who wish can take an excursion to the Evenki camp, just like before.

This “misunderstanding” reminded us of an urgent problem. Hunting ringed seals is being discussed not only within the framework of a “safari”, some scientists state that the Baikal ringed seal has no natural enemies, except for humans. And, if hunting ringed seals is forbidden, their population on Lake Baikal can uncontrollably grow, which may damage the seals themselves: the fodder supply will be exhausted, the animals will begin to get weak and ill, mass deaths similar to what happened last year (about 140 ringed seals died) are probable.

We managed to have a talk with possibly the last expert in Irkutsk studying Baikal ringed seals. Evgenii Baranov heading the Irkutsk Sealarium used to work with the long-disbanded department for the study of ringed seals at the Limnological Institute in 1990s.

“Does it make sense to hunt the ringed seals to regulate their number?”

“To begin with, ringed seals are as intelligent as dolphins: we have proved it during the time of existence of the sealarium. The animals are very smart and nice. So killing them is an ethical crime. Especially when young seals are killed.”

“But if you are not emotional, but rational? Control of population numbers and all that stuff…”

“It has never been rational or necessary to kill ringed seals. The animals regulate their population themselves. Childbirth ability in females directly depends on external conditions. If these become unfavorable, there is not enough food, the situation is stressful, animals get sick, the ice is bad, or even upon transportation, in unusual conditions:  females have the ability to resorb the embryo, they often have miscarriages. In 1960s the Irkutsk scientist Pastukhov carried out studies that proved that a large percentage of female seals get pregnant, but do not bring babies. After the mating ringed seals undergo ecdysis. So, during the first two months, before ecdysis, the fetus is in an embryo state. Then a ringed seal seems pregnant, according to all signs, the time to give birth comes: and there’s no embryo in the seal’s body. If the conditions are unfavorable, the embryo does not enter the stage of development. The way the ringed seal responds to unfavorable conditions has been proven by global experience:  there have been no cases of ringed seals giving birth in captivity. In the wild they reproduce rapidly and regulate their optimum population size.”

“What do you thing about hunting ringed seals? Does this mean that even if people caring about the population control kill a part of the animals, as you say, the population will soon recover?

“When people insolently interfere with natural processes, the results are never good. In this case, the situation threatens to lead to a “pendulum effect”. People announce quotas for shooting, start hunting. This happens regardless of the fact that there is no economic benefit from hunting seals: their meat cannot be eaten, and it is impossible to sell the skin and make a profit. After all, processing and recycling of the waste cost much more money than the processed skin. Ringed seals use the ability to control the optimum number of population, begin to reproduce rapidly. The people are in despair:  “There are too many ringed seals”, they want to control the seals’ population and kill a part of it. This makes absolutely no sense!”