"Baikal Project": Bridges and Trails That Save Lives

The first season of the “Baikal Project” was launched in 2002. Today its priority is the construction of bridges and ecological trails on the reserved territories of Lake Baikal. During this time the participants have already built more than a dozen bridges which have saved many human lives.

An author of “Key to Baikal” had a talk with the representative of the “Baikal Project” - Evgenii Rakityansky - who started as a simple project’s participant, became a commander, then a team leader, and now he is one of the coordinators of the movement.

Evgenii Rakityansky: The Baikal Project has constantly evolved, and I have seen all the stages of the development of this movement. It all started for me from my participation in 2005. I liked the idea of building a trail along the picturesque places of Lake Baikal. But I was attracted by the fact that I could do it next to the people whom I thought to be suitable to share my views with, I could talk about the meaning of life with them.

I have always wanted to participate in hiking, but I was not satisfied with the fact that often it was reduced to extreme for the sake of extreme or a trial by the benefits of freedom.

At that time the Baikal Project paid less time to the construction part, there was an extra element of extreme, and the educational program did not imply a volunteering philosophy. During that year we built a section of the trail from Listvyanka to the settlement of Bolshiye Koty, then we went on a hike to the mountains. I was struck by mutual aid, culture of relationships, respect.

Then I understood the meaning of the project: we were shown the perfect world, and then immersed back into the real world. Indeed, it is impossible to change yourself or the world for the better without having personal experience.

KTB: Why did you start building bridges? 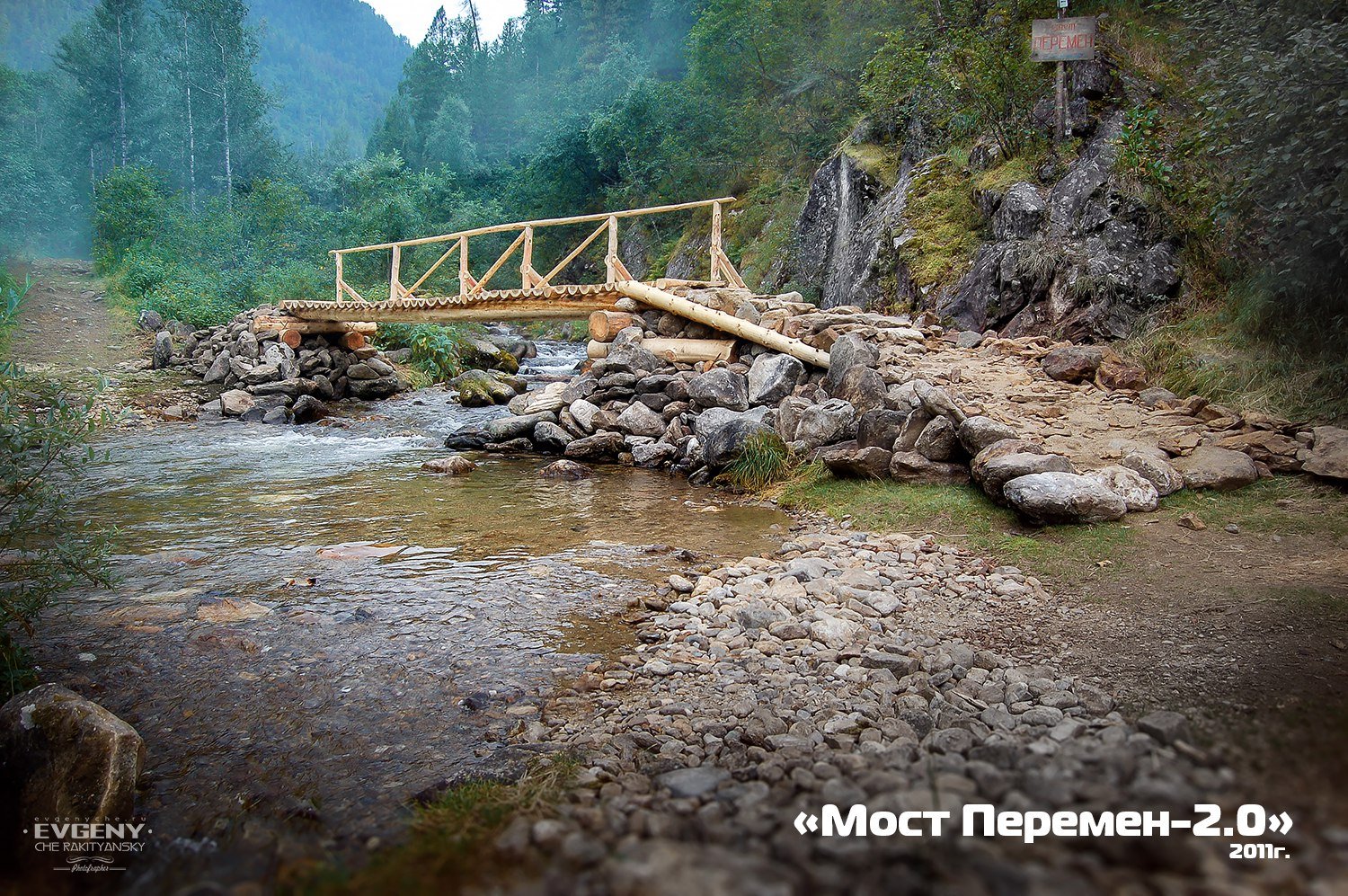 Evgenii R.: The question of the project implementation arose in 2002, and Natalia Naumova, the founder of the Baikal project, began a discussion with the Pribaikalsky National Park, but she found the needed understanding at the Club of Mountain Climbers. The guys from the club told her that the popular route from the Temnaya Gorge was inconvenient because of the need to wade the river bed of the Angasolka River. Therefore, a bridge was built during the first season of the Baikal project. Two more large bridges on Khamar-Daban: “Bridge of Changes” and “Nadezhny (“Reliable”) Bridge” – were built a year later.

In 2004 we got acquainted with the “Great Baikal Trail”; after that we have been constructing trails for three years in a row. The Baikal Project was responsible for its sections on the trail Listvyanka - Bolshie Koty. For example, a retaining wall with stonework is one of such places.

As far as we organize the project on our own and our resources are very limited, efficiency dominates. This was one of the reasons why we returned to the most popular hiking route Slyudyanka - Chersky Peak. We had the task of reducing mortality on this route. It was required to build big reliable bridges, because people used to die during river crossings. The project became much more complicated, but we have accomplished this task, reducing the mortality rate by 100% at this place  and turned the trail from an extreme to a family one. Bridges became the hallmark of the Baikal Project.

KTB: How many trails and bridges have been built since 2002?

Evgenii R.: During the entire Baikal Project we have managed to build 14 large bridges (10-14 meters), 3 medium ones  and several small bridges that survived the flood of 2012, as well as kilometers of trails.

Over time we began to wonder about the reason why people go to the mountains. Then we understood that the goal was not to go as far as possible. After all, people went to get inspiration, impressions, meaning of life, and our task was to help them with this. I would say that then we started to reveal the secrets of Lake Baikal, create viewing platforms, stone approaching routes and stairs, trails to hidden waterfalls, make bridges and paths “attractive”. Whereas many kilometers of the sections of the trail to Bolshiye Koty were constructed in big steps during the project, the stone structures on the Khamar-Daban were constructed meter by meter and at a cost of great effort.

KTB: What will be implemented at the “Baikal Project” in future?

Evgenii R.: Seven years ago I got excited about the idea of shooting a volunteer reality show. I wanted to show how the participants change in the course of the project, why non-professionals manage to create such serious structures as bridges. This came out of our tradition to write reviews and keep a diary of the project. A reality show is aimed at ensuring that, on the one hand, volunteers learn to understand and notice each other, and on the other hand, they get their share of glory. We also make a reality show in order to reveal the thoughts and emotions of a volunteer - how and why he/she builds a trail, what difficulties he/she goes through, what is his/her incentive. People do not believe in glamorous things, we want to show the real essence of volunteering, the real world, just like in “The Matrix”.

KTB: Last year you received a grant from the Russian Geographical Society, did it change your project?

Evgenii R.: The grant made it possible to enhance the project. We have never received any grants or substantial funding before, except to purchase some tools, so the grant gave us the determination to expand the project: we have filmed an extensive video footage, started a staged launch of the website and conducted a reality show testing. But the peculiarity of the Baikal Project is that it will take place, even if there is no support.