A Volunteer’s Diary: from a Participant to an Expert

“Key to Baikal” starts a new column where real volunteers, people who really help Baikal and save its fragile ecosystem every day, will tell you why they chose this path and why everyone should try to be a volunteer at least once in a lifetime.
Natalia Tugutkhonova

I learned about volunteering and the “Great Baikal Trail” back in 2005, when I became a first-year student of the university. One of the subjects was taught by Arkady Davidovich Kalikhman – an Honored Traveler of Russia and, as it turned out, one of the founders of the public organization titled “Great Baikal Trail” (GBT) engaged in construction of ecological trails at Lake Baikal. Arkady Davidovich told us about the hikes, volunteer projects attracting people from all over the world and the significance of volunteers’ activities at Baikal in such an exciting way, that I suddenly wished to try myself as a volunteer, and in an ideal scenario, to become a part of this volunteering movement. But that year I had a lot of excuses not to join the ranks of volunteers constructing trails: “I do not speak English”, “Traveling around Baikal may be expensive”, “I will not have time to study”, “I’ve never participated in a hike!”, “I do not even have a backpack!” and so on, ad infinitum. I simply did not have enough determination. Then I did not know that everyone could become a volunteer. So I forgot it.

Next time I came across “GBT” several years later, when I looked through the list of places where the students of Linguistics department of our university could undergo practice. I was not going to become a linguist, but this time I was more confident. I also had an urge to engage in useful activities, a desire to spend mysummer vacation in an unusual way and a dream to see the wild pristine Baikal. The GBT volunteering project seemed to be a perfect match for achieving all these goals, so I did not hesitate to apply for participation. Soon I paid the volunteer fee and bought a tourist backpack (by the way I still use it!), then I went to the first volunteer project in my life. 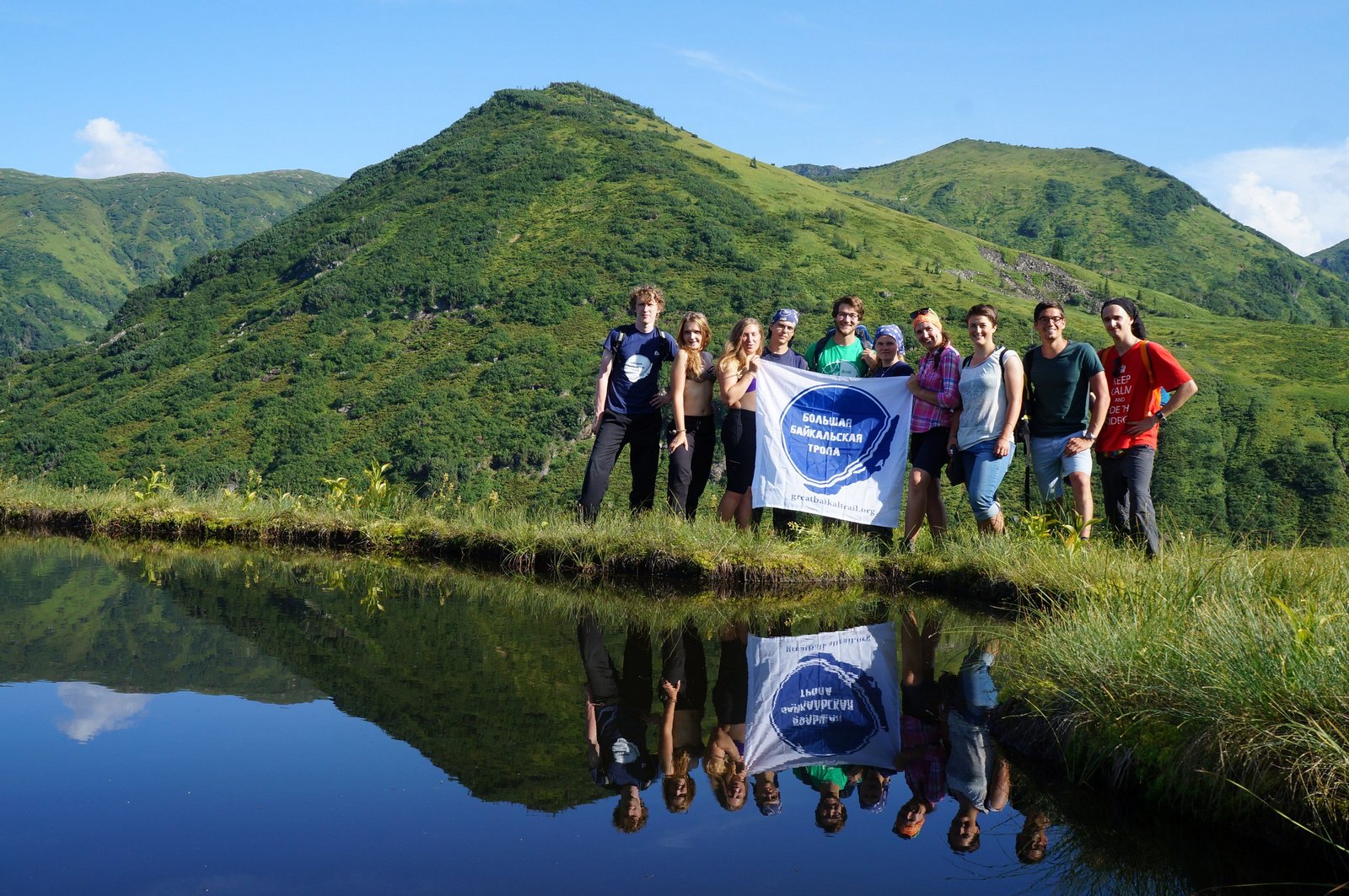 The “Hunters’ and Fishermen’s Trail” project was held in Buryatia. 16 volunteers from Russia, Canada, Great Britain, USA and Germany gathered at the Barguzinsky Bay of Baikal. We differed in age, social status and occupation, but wanted to achieve the same goal: to help the deepest and purest lake on the planet. We quickly became friends (language barrier is overcome quite easily, when you speak with good people) and spent two weeks in tents on the coast of Lake Baikal. It was the time of the most beautiful views, hard work on the trail, swimming in the lake, evening gatherings around the campfire, getting acquainted with the cultures of different regions of Russia and different countries of the world. I left home being a new person: with a bundle of knowledge, lots of impressions, a dozen of good friends all over the world, the desire to continue to do good deeds and a clear awareness of what ecological trails are and why they should be constructed.

Why the Trails are Important

So why is it necessary to construct trails at Lake Baikal? So that to ensure that tourists who come to our lake do not wander in wrong places, trampling down flowers and herbs (including those listed in the Red Book), breaking trees’ branches, scaring away animals and birds, throwing away garbage. If there is a convenient path in the way of a tourist, most likely, he/she will follow it. The trail grasps the flow of tourists, sending them into a single channel, disciplines them, thus it helps to reduce the burden on the environment. The trail most often encompasses the most picturesque views, so the tourists do not need to make their way to the sights through the bushes, trampling plants along the way, getting branches in their eyes and ticks falling on them from the bushes. The trail is safe: although in some places the route becomes longer after the construction of the ecological trail, but the probability of getting lost, falling off and being injured greatly decreases. Besides, most often the trails are constructed in specially protected natural areas - reserves and national parks, so they are used by the employees of these protected areas in their work. Please note that this is not the complete list of trails’ advantages. 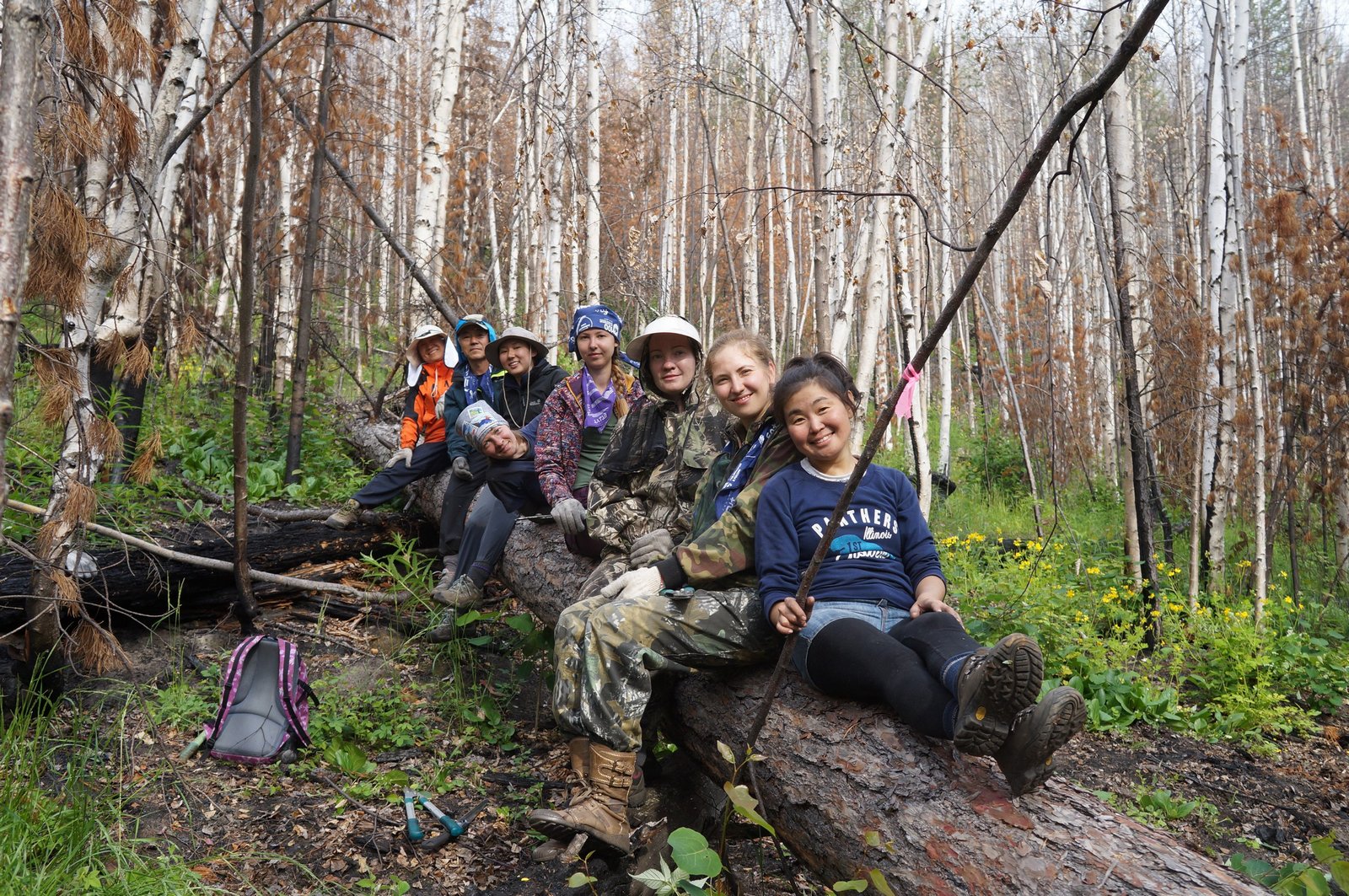 When the GBT started the casting of participants for the next summer’s projects, of course, I immediately applied for participation. At that time I began to come to the meetings of the volunteers of the “Great Baikal Trail”. I learned that, in addition to the construction of the trails, the members of the GBT were engaged in other equally important issues, such as planting trees and delivering information on ecological and social topics to the children living in the settlements around Baikal, and I felt even a deeper respect to the organization.

Then, all of a sudden, I received an offer to join a summer project not just a participant, but as a team leader’s assistant, that is, an assistant to the team leader organizing the life of the volunteers in the camp and being responsible for the team’s work on the trail. It implied much more responsibility, but was also much more interesting, so I gladly agreed. The project was implemented successfully; it could not just be otherwise! We sang songs accompanied by a guitar, a tambourine and a harmonica (fortunately, there were a lot of musicians in the team!), role-played books, our team hid from a long-lasting rain under a huge canopy and, of course, we worked hard on the trail. I am still close friends with the guys from the Russian capital who participated in that project and helped Baikal.

After that I successfully completed the courses of team leaders and participated in several trail constructing projects in different parts of Lake Baikal where I went as a team leader, taking leave on my main job (then I already graduated from the university and got a regular job in the office). I tried myself as a coordinator of correspondence with volunteers (although I was already working a volunteer then). Together with the guys I went to give lectures to children on weekends, took part in the GBT seminars at the Botanical Garden. I learned to know about other environmental activities: tree planting campaigns, garbage collection, waste paper collection:  I was happy about the emergence of new ecological initiatives in our region and had pleasure participating in these.

In 2013 I was lucky to take part in a six-month international volunteer program in the USA for the leaders working in the field of environmental protection (thanks to the experience gained in my work with the GBT!). During the program I got acquainted with ecological enthusiasts - volunteers from other countries, learned about environmental problems in different parts of the world and the ways these problems could solved by volunteers. After the trip I became even more confident that I wanted to work in the sphere of environmental protection, precisely with volunteers. As people say, thought are things: soon I was called to coordinate a new season of summer projects for the” Great Baikal Trail”, and a year later I was invited to the GBT for permanent work.

Now I have already been an employee of the “Great Baikal Trail” for two years. We hold many different volunteer projects, not only in summer, but also in winter and in autumn. Now, in addition to the construction of trails, we also hold art projects and the projects on restoration of springs. We cooperate with virtually all the protected areas of the Baikal region. We are still working with children. We participate in environmental and social activities of our friends and partners. We always welcome interesting ideas and new volunteers!

The 5th of December was officially selected the Volunteer’s Day in Russia in 2017. It is amazing that now there is a holiday celebrating those who help people in trouble, care about animals and nature, do good deeds free of charge. Congratulations, my friends!